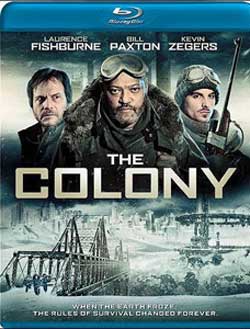 Forced underground by the next ice age, a struggling outpost of survivors must fight to preserve humanity against a threat even more savage than nature.

I’m starting to notice that my attention span is growing shorter and shorter. I’ve watched several good films recently where I almost lost patience and shut it down. It turns out, if you stick around long enough with some, you may find yourself rewarded. Another thing I’ve noticed is the serious lack of Bill Paxton on the big screen. It’s nice to see him in a post-apocalyptic horror film with Laurence Fishburne playing the type of character we love to see him in. It’s called The Colony and it’s not a bad film. This one soared in under the radar. I can see why it went straight to disc but it deserves a look, at least by genre fans.

In the future, man-controlled weather machines are used to control global warming. One day something happens and it never stops snowing. The world has fallen and there are very few humans left. Sickness and disease is widespread and happens frequently. The other challenge they face is surviving when there’s a lack of food.

Different colonies have been established but Colony 7 is our focus. It’s run by two former soldiers Briggs (Laurence Fishburne) and Mason (Bill Paxton) and they have set up rules to follow in order to keep people alive. Mason has grown less tolerant of sickness and is quick to pull the trigger. Sam (Kevin Zegers) is butting heads with him over it while Briggs tries to keep the peace. There have been some issues over at Colony 5 and Briggs grabs Sam and they travel there to see if they can be of help. They discover a distress call by people in a colony who were able to reverse the effects and it has grown warm. Sadly, this wasn’t the only thing they discovered in Colony 5. There is an evil lurking within, waiting for some new blood to come knocking. 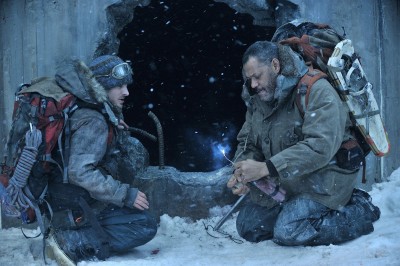 The Colony suffers from one major issue: pacing. The first half of the film chugs along far too slowly. Aside from a couple of decent character moments, nothing much happens. I grew bored and just wasn’t into it. Once they confront the evil force for the first time, things finally kick into high gear. There’s a nice mix of practical effects with CGI. I’m not sure if this would be considered a spoiler or not but just in case, POSSIBLE SPOILERS AHEAD…..
While the evil force that attacks them are effective, it was hard not to think about 30 Days of Night when the leader is around. The production design and the vast look of the snow-covered wasteland is pretty spectacular. The constant snowing was a nice touch for this type of film.

It benefits from having a really cool cast. The aforementioned actors are the only two major names but the film is carried by Kevin Zegers (Dawn of the Dead 2004). His character is the most developed and the whole thing may not have worked had someone other than Zegers been cast. He has a relatable and genuine quality in the film which helps the audience to identify with. Fishburne is in a role he’s comfortable with being, a sort of mentor. The best kills and action scenes all involve him. He isn’t doing Matrix-like moves, just brutally kicking some ass. Paxton is the guy you love to hate. He does stupid things for the wrong reasons and you just want to ring his neck. 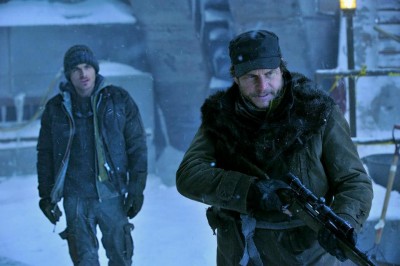 The Colony is a very entertaining thriller that delivers the action and blood in a relatively fun manner. It takes some time before we get to the meat of the piece, so if you have the patience, you will find yourself rewarded. The acting is solid all-around with Paxton and Fishburne delivering great performances (even if both actors are only supporting characters). Director Jeff Renfroe (Sand Serpents) is a man with a unique vision and hopefully will have an interesting career. This is a flick worth your time on a cold weekend. (*** out of 5)

The Colony is now available on bluray per Image Entertainment