The Doctor Who Project: The Empty Child

Doctor Who is a program often dismissed, even by those involved with it, as a children’s show. Over the course of its long history, however, Doctor Who has featured a number of disturbing characters and plot lines that make the show relevant to horror fans. In this column we’re going to focus on the new series, beginning with the 9th Doctor, and this month we’ll take a look at one of my favorite episodes, “The Empty Child”. 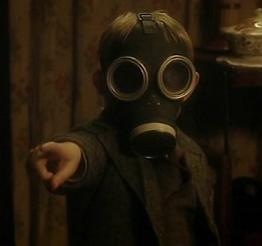 “The Empty Child” is an important episode for a couple of reasons; it’s the first written by Steven Moffat, who later became the showrunner and main writer, and it marks the first appearance of John Barrowman as Captain Jack Harkness. The episode features Christopher Eccleston as the 9th Doctor and Billie Piper as his companion, Rose, who find themselves in 1941 London after pursuing a strange metal cylinder. Rose, trapped on a barrage balloon after following a boy in a gas mask asking for his “mummy,” is rescued by the flirtatious Harkness. The Doctor, meanwhile, receives a strange call on the TARDIS’ phone from a boy asking the same question, though a young woman named Nancy warns him not to answer. He follows Nancy to a house, where a group of children scavenge the food left out when the owners went into hiding from the Blitz. The Doctor sits down with the children and asks if they have seen Rose; Nancy requests that he leave, but before he can do so, the child knocks at the door, asking for his mummy. Panicking, Nancy orders everyone to leave from a different entrance, then locks the front door. When the Doctor asks why she refuses to let him in, Nancy explains that it isn’t a real boy. If the Doctor touches it, he will become “empty”, too.

The Doctor learns from Nancy that the cylinder that fell from the sky is under heavy guard nearby. She also admits that she lost her brother to a recent air raid, and her guilt compels her to care for the other children. At the hospital near the crashed cylinder, the Doctor encounters a Dr. Constantine caring for a room full of comatose patients who all bear the same physical injuries and gas masks fused to their faces. Dr. Constantine begins to explain that Nancy’s brother, Jamie, was the first patient with these symptoms. Before he can finish, however, he transforms into one of the victims. Rose and Jack arrive at the hospital in time to save the Doctor from Constantine and patients. 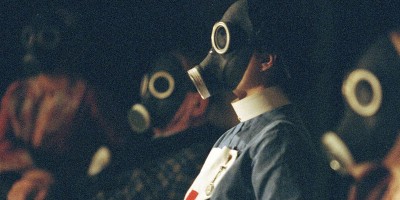 The episode ends with the three trapped in a room while the patients converge upon them, all asking for their mummy. Meanwhile, Jamie corners Nancy, who has returned to the house for more food.

The concluding episode, “The Doctor Dances,” reveals that the cylinder The Doctor was chasing at the beginning of “The Empty Child” is the shell of a Chula medical transport. The ship contained nanogenes, which had never encountered humans before and assumed, when they healed Jamie, that the gas mask was part of his face. Everyone infected by the plague thus shared Jamie’s injuries, as well as the typical abilities of Chula soldiers, specifically super-human strength, telepathy, and the ability to communicate through various devices. Nancy at last admits that she’s not Jamie’s sister—she is actually his mother. The Doctor urges Nancy to tell Jamie the truth, and as she hugs him she reveals to him her true identity. The nanogene cloud then determines that Nancy’s DNA is consistent with being Jamie’s parent. Once the nanogenes repair Jamie, the Doctor sends them out to fix everyone they have transformed.

“The Empty Child” touches on several popular themes in horror fiction: how guilt can haunt us (sometimes literally), the horrors of war, and the “creepy child”. As the 9th and 10th episodes out of  13, it signaled the often darker turn the show would take once the Doctor regenerated at the end of the Series 1.