Land of Shadow and Substance: Execution

It’s rare to find a Twilight Zone tale created from an unpublished source, but “Execution” is one. Originating from a George Clayton Johnson story and yet again rewritten by Serling may be considered one of Serling’s weakest in both dialogue and predictability. Johnson’s tale had included two scientists, but Serling removed one electing to add a modern day criminal instead, as well as a touch as the star of the episode, a perfectly portrayed western gunslinger, having escaped a necktie party still finds himself at the end of a rope, abet a much smaller one. Also, be on the lookout for Russell Johnson in a pre-Gilligan’s Island closely similar role. 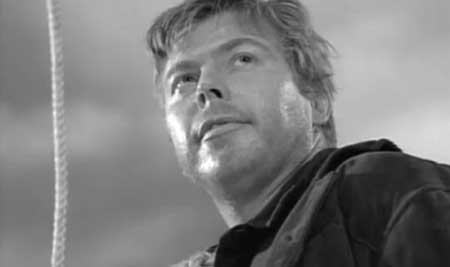 Joe Caswell (Albert Salmi) is a hard man, a ruthless man, a cold man and a murderous gunslinger. In 1880, when you shoot a man in the back, typically justice is rapidly served and his case is no different. As the show begins, Caswell, surrounded by a Judge (Fay Roope), Reverend (Jon Lormer) and a few others, is being led on horseback to an isolated and desolate looking tree, where he is to be hanged.

Being a man of little words and even less remorse, after the noose is placed around his neck, he doesn’t want to hear what the reverend has to say and demands to get on with it. Obliging his wishes, the horse is slapped and it sprints out from under him, leaving him to dangle. But, as the onlookers watch, Caswell suddenly disappears.

Reappearing eighty years later in the laboratory time machine of Professor George Manion (Russell Johnson), Caswell is immediately perplexed. While the professor’s intent was admirable – to learn from the past – simply choosing a random person and transporting them to the era will have unforeseen consequences and when he views Caswell’s deep, cold and unforgiving eyes coupled with the rope burns on his neck, he realizes the error. For Caswell truly is an unsavory type.

Reaching in a desk drawer, Manion attempts to pull a pistol, intending to force Caswell back into the time machine. But, Caswell is too powerful and bashes a metal lamp over the Manion’s head, killing him. Bolting from the room, Caswell finds his way out onto the busy city street where he is overwhelmed by flashing neon lights, horseless gasoline powered carriages and noise. The latter annoys him the most and he enters a bar where a jukebox is playing loud music. Seeking silence, he proceeds to smash the noisemaker with a chair. Of course the bartender (Richard Karlan) has choice words for Caswell’s actions, but when Caswell bellies up to the bar and places the gun he had taken from the professor, the bartender feels threatened, changes his tune and offers Caswell a drink. 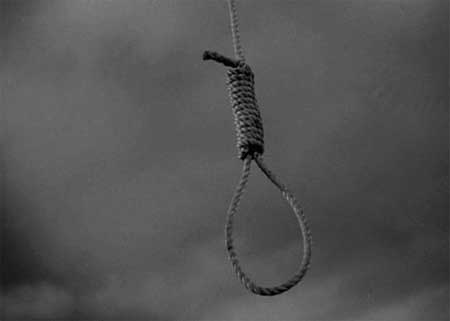 After taking a couple of gulps from the bottle, Caswell spots a turned off television mounted on the wall behind the bar and inquires, thinking it to be some sort of window. The bartender humors him and turns it on just as a show portraying a hulky gunman stalking the camera appears. Caswell draws and fires, destroying the television and runs out of the place.

Having found his way back to the Professor’s laboratory, he is soon joined by Johnson (Than Wyenn), a two bit thug and thief who happened by and noticed an opportunity when seeing the door open.

Unaware of Caswell’s background, Johnson begins ransacking the place, searching for valuables and making small talk with a confused Caswell, assuming he too is one in the same that had simply beat him to the punch.

Seeing the professor prone on the floor, Johnson complements Caswell for taking care of the dirty work and makes mentions that Manion has got to have a safe around there somewhere. Caswell pulls the gun and the two grapple. Johnson gets the upper hand and wraps a curtain drawstring around Caswell’s neck, strangling him.

Relieved, Johnson resumes the search for an assumed safe and enters the time machine. The glass door automatically closes and Johnson is inadvertently sent back, taking Caswell’s place at the end of the rope. Ironically, it appears that justice has no timeline boundaries.

Next time – The Big Tall Wish

Land of Shadow and Substance: Execution