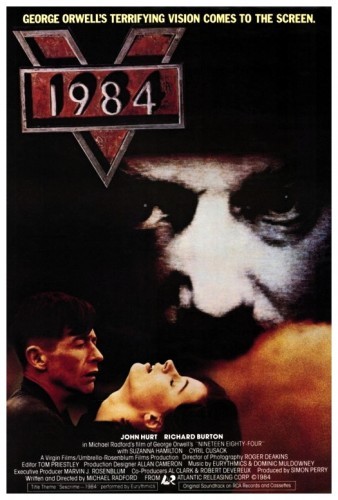 “In the year 1984, rocket bombs and rats prey on the inhabitants of the crumbling metropolis of London. Far away on the Malabar Front, a seemingly interminable war rages against Eastasia. The Ministry of Truth broadcasts ceaselessly to the population via its inescapable network of telescreens. These devices, which pervade all aspects of peoples’ lives, are also capable of monitoring their every word and action. They form part of an elaborate surveillance system used by the Ministry of Love, and its dreaded agents the Thought Police, to serve their singular goal: the elimination of ‘thoughtcrime’. Winston Smith is a Party worker – part of the vast social caste known as the Outer Party, the rank and file of the sprawling apparatus of government. Winston works in the Records Department of the Ministry of Truth – the section charged with modifying historical news archives for consistency. When by chance Winston uncovers incontrovertible proof that the Party is lying, he embarks on a journey of self-questioning. In doing so, he becomes a thought-criminal. Winston begins to notice that a young Party member, Julia, is watching him. She wears the distinctive sash of the ultra-zealous Anti Sex League and Winston fears that she is an informant. However, to his surprise, she reveals herself as a subversive and they embark on an illicit and dangerous relationship. This prompts Winston to explore deeper the blur between propaganda and reality. Ultimately, it leads him to O’Brien – a member of the Inner Party who sets Winston on an irreversible course of discovery.” (courtesy IMDB)

As both literary political fiction and dystopian science fiction, Nineteen Eighty-Four by George Orwell is a classic novel in content, plot and style. Many of its terms and concepts (Big Brother, Doublethink, Memory Hole, Newspeak, Room 101, Thoughtcrime, etc.) have entered everyday use since its publication in 1949 and popularised the adjective ‘Orwellian’ which describes secret surveillance, official deception and the manipulation of facts by a totalitarian or authoritarian government. Nineteen Eighty-Four takes place in Great Britain, now known as Airstrip One, in a future world of perpetual war, government surveillance and public mind-control dictated by English Socialism, a political system that persecutes all individuality and independent thinking as thoughtcrime. This tyrannical government is represented by Big Brother, a semi-divine Party leader who may not even exist. Winston Smith works for the Ministry Of Truth responsible for propaganda and historical revisionism. His job is to re-write past newspaper articles so that the historical record always supports current Party policy. Smith is a diligent worker but he secretly hates the Party and dreams of rebelling. 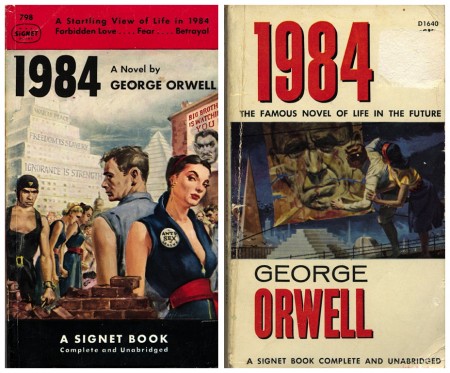 Universally recognised as one of the best, most important novels of the twentieth century, you’d think filmmakers would have taken more care with adapting and casting such a significant project. The first adaptation was an episode of the CBS television anthology series Westinghouse Studio One in 1953, only four years after the book’s release. Written by William Templeton and directed by Paul Nickell, it ran for only forty-eight minutes, not enough time to give the story any justice and contains inexplicable alterations, like Emmanuel Goldstein being changed to ‘Cassandra’ (Templeton was also recruited to write the 1956 film adaptation, and changed the name again to ‘Cellador’). Starring Eddie Albert, Lorne Greene and Robert Culp, the first screen version of Nineteen Eighty-Four was quickly forgotten and swept under the carpet. 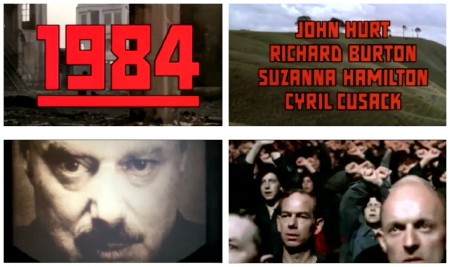 As if in an attempt to right America’s wrongs, the BBC produced their own teleplay the following year, written by the prolific Nigel Kneale, creator of the excellent Quatermass serials and films: “Orwell guessed at a final evil to consolidate all others, the abolition of ideas through the destruction of words to express them.” Watched by nine million viewers, the production remained faithful to Orwell’s nightmare vision of a world in which the nature of human thought has been debased and morality turned upside down, to serve a totalitarian regime that sits atop a population pyramid which spreads down through an Inner Party and the Outer Party to the unwashed masses, the Proles. The controversy it aroused led to calls for the scheduled second performance to be banned, and director Rudolph Cartier drew some powerful performances from his cast, notably Peter Cushing, Yvonne Mitchell, Donald Pleasence and Andre Morell. 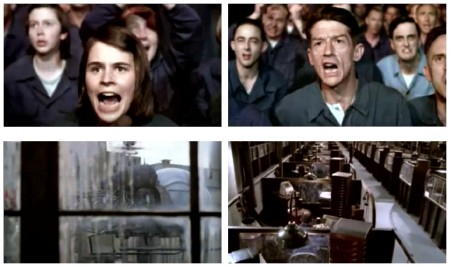 One wonders what George Orwell would have said about such an excellent television adaptation but, if he’d been alive in 1956, he would have no doubt seen the film version of Nineteen Eighty-Four (1956) and that doesn’t bare thinking about. Directed by the less-than-mediocre Michael Anderson – who later made such turgid genre films as Doc Savage (1975) and Logan’s Run (1976) – it was based on William Templeton‘s television script and starred the totally miscast Edmund O’Brien as Smith. Together with his lover Julia (Jan Sterling) he creates a private world of his own for a brief time away from the ever-present gaze of Big Brother but is betrayed by state official O’Connor (O’Brien’s name was changed to O’Connor to avoid confusion with the lead actor) played by Michael Redgrave giving the best performance in the film. Two different endings were shot: The American version ends as it does in the novel with Smith and Julia successfully brainwashed; the British version has them break their conditioning and dying hand-in-hand in a hail of bullets while defiantly shouting “Down with Big Brother!” – an ending which completely defiles Orwell’s themes. 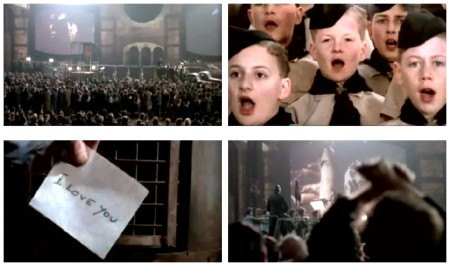 Three decades after its publication and fast approaching the year of the title, it looked like we would never see a truly faithful adaptation of Orwell’s novel. Far from losing relevance as time passes, his vision of a totalitarian society seems to have become more ubiquitous with each passing year. Its influence has been the strongest in the science fiction genre of course, where Orwell’s book has been cited as the main source of inspiration for all kinds of films, from THX-1138 (1971) to Brazil (1984) to Gattaca (1997). It was never intended to be a description of a remote and distant future, however. It was originally titled 1948 after the year in which it was written, and was meant to depict an allegorical exaggeration of post-war Britain. Shortly before her death in 1980, Orwell’s widow eventually agreed to allow a film to be produced under the condition that no futuristic special effects be used, and director Michael Radford finally succeeded in obtaining those film rights. His pitch was to do a completely faithful adaptation that would be released in the actual year of 1984, with several scenes to be shot on the exact dates and locations mentioned in the novel. 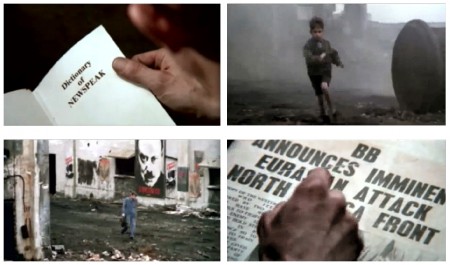 As laudable as this over-determined fidelity seems, it’s really just a ploy that ultimately has more value as a promotional tool than anything else, for Winston Smith (John Hurt) soon comes to the realisation that he has no way of knowing what day or even what year it is – the government has such complete control over every aspect of everyone’s life that all dates have become unreliable, even irrelevant, as history is continuously rewritten. But the year it takes place in is ultimately not the point. Masterfully directed by Radford, Nineteen Eighty-Four (1984) was attacked by some critics for its slow pacing and uncompromisingly bleak vision, but it’s actually a tremendously underrated, visually stunning and properly depressing adaptation of Orwell’s classic about a totalitarian society that is characterised by government propaganda, mind-control, torture, feverish patriotic rallies, duped masses and the individual’s fear that Big Brother is watching them at all times. 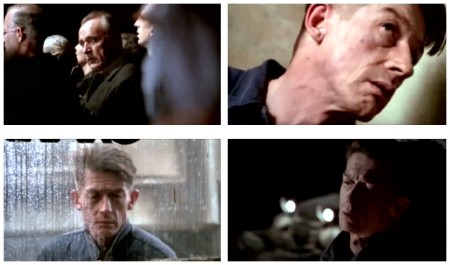 Radford also made the interesting choice to film the future as if conceived in 1949, the year the book was published, so there is none of the technological gadgetry that Orwell might have included if he had written the book today. What is perhaps most impressive is that it makes viewers (who can concentrate on Orwell’s human tragedy rather than the special effects) understand how such a terrifying world can evolve from our own, and how a government can systematically control an entire population. Unlike the 1956 film, the relationship between disillusioned government worker Smith and co-worker Julia (Susanna Hamilton) is distinguished by their need for physical contact and sexual release, rather than love. Significantly, where the earlier film was about whether love could endure (a trite theme at best), Radford is faithful to Orwell in that he deals with whether the mind, free will (including the need to act on sexual impulses) and, specifically, one’s political consciousness will endure. The answer unfortunately is no – Orwell’s tale warns us never to allow such a totalitarian state to develop, because at that point there would be no chance for the individual to buck the system. 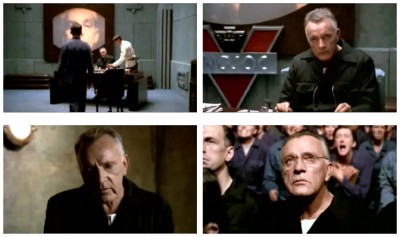 The sets and locations look like bombed-out post-Second World War England rather than Stalinist Russia, which many scholars and high-school English teachers insist was Orwell’s model for Oceania. The discovery in the nineties of Orwell’s BBC wartime radio material lends credence to the notion that his prophecy was mostly influenced by British wartime rationing as well as BBC censorship and propaganda. In fact ‘Newspeak’ was inspired by the old BBC radio code. Featuring strong performances from John Hurt – who would later appear in James McTeigue‘s film V For Vendetta (2006) as the High Chancellor looking like Big Brother on massive television screens – and in his final role, Richard Burton as the emotionless intellectual minister who, in a brutally realistic sequence, tortures and brainwashes Winston Smith. Burton joined the production six weeks into its shooting schedule, after the role had been rejected by Sean Connery, Anthony Hopkins, Paul Schofield and Rod Steiger. 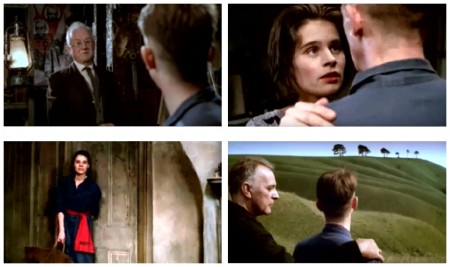 Radford’s adaptation is in all aspects not only a faithful version of Orwell’s book, but also an excellent film in its own right. Visually, it seems more like a period picture than a science fiction piece. In fact, cinematographer Roger Deakins wanted to shoot the film in black-and-white, but Virgin Films said no, so instead Deakins used a bleach bypass to create the distinctive washed-out look of the film’s colour visuals. Rather than a depiction of a future society, Radford succeeds in reversing the digits once more by creating a frighteningly believable world that seems like an alternate version of 1948. It’s with this thought in mind – or between your knees – that I’ll politely ask you to please join me next week when I have the opportunity to throw you another bone of contention and harrow you to the marrow with another blood-curdling excursion through Horrorwoodland for…Horror News. Toodles! 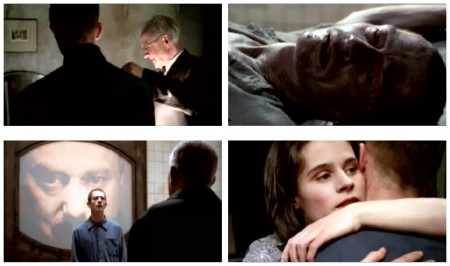