SYNOPSIS:
“Kevin Flynn is a former employee of the software corporation Encom, now running an arcade. Flynn has been trying to hack into Encom’s mainframe computer to find evidence that Encom’s senior executive Ed Dillinger stole four video games he created. But Dillinger’s supercomputer Master Control Program foils Flynn’s efforts and dictates and controls most of the computer systems. One night, Flynn’s former girlfriend Lora and her boyfriend, ace computer programmer Alan Bradley helps Flynn break into Encom to shut down the MCP with Alan’s security program Tron. But MCP uses Lora’s matter transmission program and converts Flynn into data and sends him into the computer. Flynn finds himself in a electronic world ruled by the MCP and his evil chief henchman Sark, where computer programs are the alter-egos of their creators and are forced to compete in gladiatorial games. With help from Tron, a heroic and fearless security program and his lover, Yori, Flynn sets out destroy the MCP and help Tron liberate the system from the MCP’s control, by destroying the MCP is Flynn’s only way of returning to the real world.” (courtesy IMDB)

REVIEW:
An alternative to adapting someone else’s comic strips is creating your own, and that’s exactly what Steven Lisberger, a young filmmaker whose only other major credit was a made-for-television animated movie called Animalympics (1978), did with his second film Tron (1982). Produced by Walt Disney studios, Tron became the talk of the industry long before it was released, and was even the subject of a Time magazine cover story (July 5th 1982). It was feared that its success would at least temporarily change the look of film and start a wave of computer-generated films. The Disney publicity machine had us believe that all the scenes that take place within the computer were actually computer-animated, but this was pure propaganda – the main characters are obviously humans in light-strip decorated costumes. 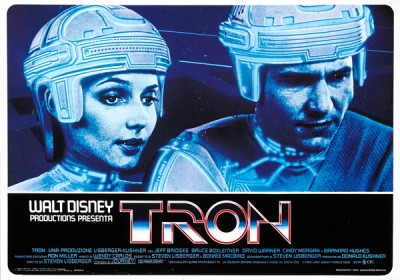 Instead of costly CGI, traditional cell-drawn animation and old-fashioned compositing were the techniques used for most of the effects sequences in the film. Several Disney animators actually refused to work on the film out of fear that they might lose their jobs to computers. This ‘mini-strike’ ultimately turned out to be eerily prescient because, two decades later, Disney closed down its traditional animation division in favour of computer work. In spite of its groundbreaking use of computer-generated effects, this costly somewhat embarrassing box-office failure soon developed a growing fan-base of nostalgically-minded computer geeks who ended up bestowing a reputation upon it that it hardly deserves. 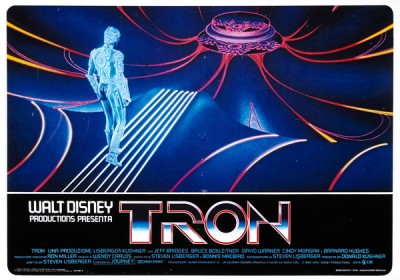 Seeking evidence that there is dirty work afoot in the communications outfit Encom, brilliant young computer expert Kevin Flynn (Jeff Bridges) is attacked by the Master Control Program, becoming atomised and inserted as an electronic simulation into the circuitry of the computer (what would eventually become commonly known as ‘cyberspace’) where he is forced to become the target in a variety of sadistic computer game scenarios. He meets other sub-programs Tron (Bruce Boxleitner) and Yori (Cindy Morgan), analogues created by programmer friends he has in real life. Together, overcoming many fiendish comic-strip-style obstacles, they seek out the vicious Master Control Program and destroy it. 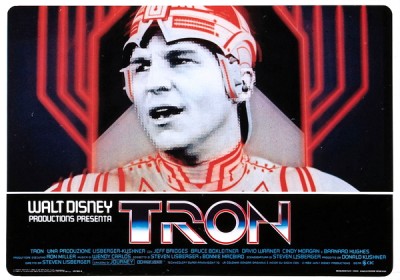 The landscapes inside the computer world are a phantasmagoria of light and colour. Unfortunately, one early sequence – a chase on light-cycles which leave a wake of solid colour where ever they go – is so strong and beautiful that nothing later in the film can really match it. The story structure bears a marked resemblance to The Wizard Of Oz (1939) in which Dorothy (Judy Garland) meets similar analogues. The quaint outdated narrative, the tacky costumes (reminiscent of the science fiction serials of the thirties) and the minimal amount of detail in the synthetic computer-generated elements, kept Tron from making its mark on pop culture the way that Star Wars IV A New Hope (1977) had done so effortlessly five years before. Nor did the movie end up doing very much for computer animation either, as it was perceived by most to be too expensive and unappealing. 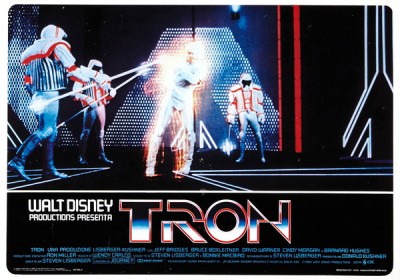 Would you believe the Academy of Motion Picture Arts & Sciences refused to nominate Tron for a Best Special Effects Oscar because they considered the use of computer-generated graphics as cheating? Unfortunately, creator-director Lisberger allows the story to become subordinate to the technique, and many viewers will probably tire quickly of the imagery, no matter how impressive and ambitious the visuals are. Produced for US$17 million, Tron barely made its money back on its initial release, eventually making US$33 million in total. This poor response was largely due to the film being geared to a very select audience, an audience who was already too busy spending their coinage on games, so the film was considered a box-office flop.

What Tron did give us, however, was the first major motion picture to attempt to visualise formerly abstract terms like ‘cyberspace’ at a time when the home computer market was still in its infancy. Its depiction of a computer’s insides as a neon-on-black realm remains a dominant paradigm, a three-dimensional landscape inhabited by anthropomorphised avatars engaged in gladiatorial gaming rituals. The way it brought to life this exciting new frontier, even if it did so in strangely childlike dimensions, was of great delight to many young viewers for whom computer science formed a then-unusual hobby.

Certainly the computer-generated scenes, although brief, represent a breakthrough to new concepts of animation, though its success in Tron is a little uneven to say the least. It’s actually the wit and good humour of the script and the performances that makes the film so pleasant. For example, the threat to an underling program that if he does not behave himself, he’ll finish up doing time as a pocket calculator. The last scene of the film, in one brilliant stroke, proposes an entirely new metaphysical subtext. We are back in the real world, looking down at the lights of Los Angeles, and there’s something very familiar about the grid patterns of light, the little moving dots of vehicles. Visually, this is the world of the computer all over again. Are we all sub-programs whose actions are controlled at the whims of some great Master Control Program in the sky? And if so, should we revolt? In retrospect, the entire film is a lighthearted text about determination.

In fact, Tron is actually more interesting to watch today than it was three decades ago, at least from a design point-of-view. Its curiously over-the-top costume design gives it a camp value that has made it very popular among aficionados of eighties nostalgia, and the film’s narrative content and pioneering technology have endeared it to computer programmers everywhere. For many years it was thought that Tron’s most enduring legacy would be its addictive and financially more successful spin-off arcade game. Interests in creating a sequel for Tron arose after the film garnered its cult following. After much speculation, a concerted effort to devise Tron Legacy (2010) began in 2007, when producers hired Joseph Kosinski to direct. Kosinski was unhappy with The Matrix (1999)-style approach to the script, and insisted on a look that was more faithful and reminiscent of the original film, and a logical consistent extension of the concept as presented in Tron.

The film score was composed and performed by French duo Daft Punk, who incorporated orchestral sounds in their repetitive electronic music, the result resembling a tribute to composer Philip Glass (not everyone’s cup-of-tea but I love it, listening to it now as I write this). The Disney publicity machine aggressively promoted Tron Legacy, receiving mixed reviews from critics who praised the effects and the soundtrack but were critical of the character development and lackluster performances. Nevertheless, the film became a blockbuster success making over US$400 million, the tenth-highest grossing film of the year. Before you have time to digest that crummy nugget of knowledge from a very special source, I’ll quickly say my goodbyes and disappear into the night, but not before inviting you to return next week to sacrifice another ninety minutes of your precious life to witness dark depravities never before realised (well, almost never) with…Horror News! Toodles!