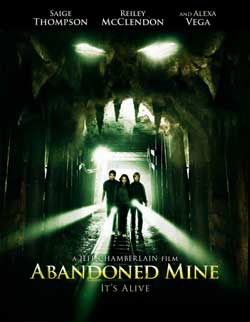 Five school friends seek adventure on Halloween night in an abandoned, haunted mine, only to find to their horror that the ghostly rumors may be true as they fight for survival.

Ask me if you heard this one? 5 friends walk into a haunted mine………

Every time I hear mine or cave mentioned in the context of a film premise, I’m quickly reminded of the 80’s film “The Boogens” (or one of those other cave-themed films that have arisen in the last decade). Mine and caves do have their place, but what you should know is that they are chosen more for their low cost production value. In other words, it’s very affordable to rent a cave for a film shoot as opposed to building a new set. 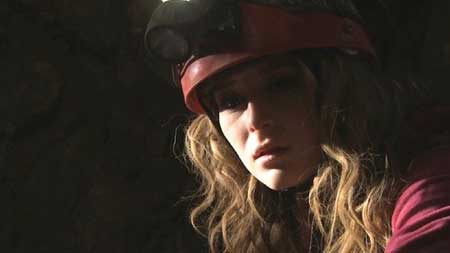 Production aside, “Abandoned Mine” is a horror film that feels like it could be better lumped into a Disney style production category. The movie’s tension uses basic elements such as walking around in the dark, encountering undiscovered regions of an old workers mine and the back story of a small group of ghosts who are said to haunt the vicinity. The setting is Halloween, so the motive is intended for fun and games, but for horror fans the film still feels much lighter than usual fare. I don’t think its an accident that the film could be better served labeled as “family appropriate”.

As 5 friends plan for a Halloween get together (organized by Brad, the more out spoken of the group (Reiley McClendon)), we begin to discover that Brad has been busy, not only planning some theatrics, but dating 2 of the girls who were invited to come. Actress Alexa Vega plays the role of Sharon, Brad’s current girlfriend, while Saige Thompson plays Brads old girlfriend Laurie who seems to have returned from being out of town (sorry, I didn’t quite take notes on that premise element). The 2 girls also happen to be bets friends (yep, I smell conflict). 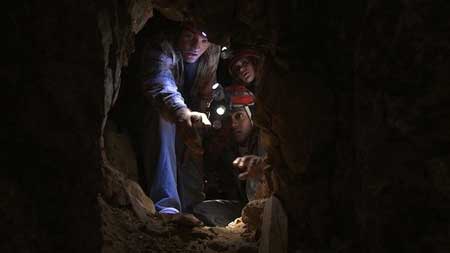 Joined by 2 more friends, (Charan Prabhakar) Ethan who is clearly the comic relief character and (Adam Hendershott) Jim who fits the role of the nerdy, meathead talking best friend, it is not long before the gang is off to the mine for fun and games.

The legend here goes that 100 years ago, a man named Jarvis and his family were tortured and left for dead by some of the miners who had issues with Jarvis owning the lands. Essentially buried alive, Jarvis and family are said to still haunt the caves.

The group seems to enjoy small pranks on each other, which “kind of” foreshadows some the events yet to take place. As a storm comes in, the team is forced to take shelter in the mine leading to a small “Goonies” style adventure. 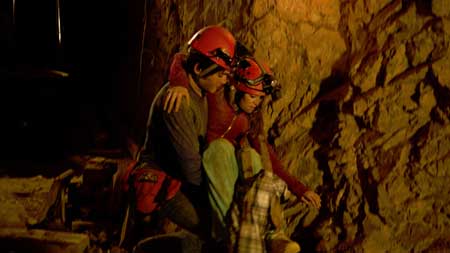 To date, actress Alexa Vega has been quite alot of films, but only small handful of horror films. While I’ll admit that we receive alot of horror films (at HNN) , Alexa’s addition made this a curiosity point thus getting priority in the stack. She’s a talented actress who at times might be too good for the company she keeps in some for these ensemble pieces. That aside, I still would love to see her break out in a horror featured role that is worthy. This one was a nice warm-up, but fans really want to see her do some damage.

Directed Jeff Chamberlain, the movie is not a bad film, but it is probably best suited for a younger audience than adults who want more intensity. Most the reactions to “Abandoned Mine” seem to focus on that one key point (family filtered). 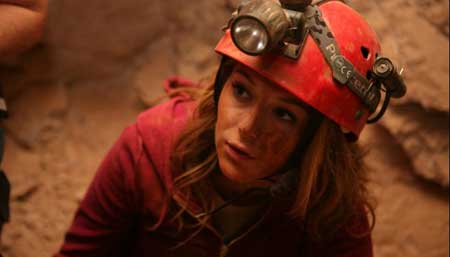 If I didn’t mention it before, there is a small role for found footage tactics weaved in that never get overly cliqued. I found this to be a good thing in this case, as surely it would be a complaint point if it had (redundancy…etc). 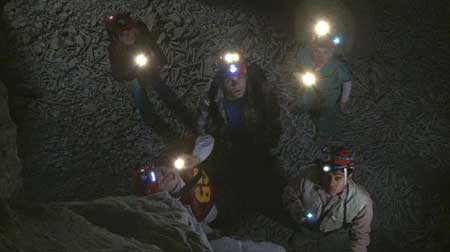 To sum things up, this a film you could buy for young teens that would be a perfect fit. If your crowd is of age to see films like “Evil Dead” and “The Conjuring”, then they probably wont sit thru after the popcorn is consumed. If your looking for a reason to check it out, then watching Vega in action is always a plus. For now, it is probably best left to rental only. 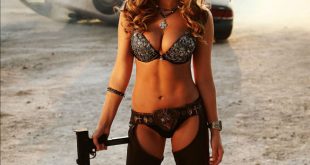