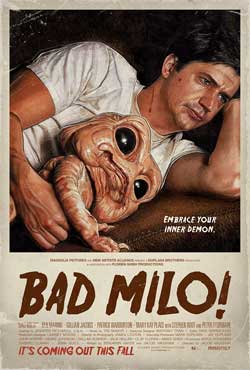 A horror comedy centered on a guy who learns that his unusual stomach problems are being caused by a demon living in his intestines.

You read the above correctly. That’s what director Jacob Vaughn’s “Bad Milo” is all about, a man with a demon living in his intestines that emerges from his ass every so often to slaughter those who are causing its host undue stress (I can’t believe I just typed those words).

Why this creature (Dubbed Milo by his host) is even inside someone’s anus is touched on but it hardly matters does it? The film isn’t as shocking as you might think judging from the synopsis, it’s actually something of a love story between a man, his wife and the vengeful creature living inside of his ass. Ken Marino plays Ken, the hapless host of the beast living inside of his butt. He works as an accountant for a large company and during the first third of the film he finds himself transferred to a new office (a bathroom) and a new job in the human resource dept. His immediate boss, Phil (Patrick Warburton) has just told him that the company is downsizing and he designates Ken as the one man who is well liked enough to fire employees although that isn’t really true. In addition to all of that, Ken is trying to have a child with his wife, Sarah (Gillian Jacobs), reunite with his long estranged father, Roger (Stephen Root), get over the fact that his mother (Mary Kay Place) is living with a much younger man & figure out why his stomach hurts so badly when he uses the toilet. 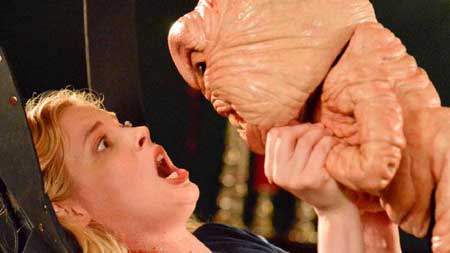 Let’s just call a spade a spade shall we? What Bad Milo trying to be is a dirtier, bloodier and more violent turn on films like “Gremlins“ and “Ghoulies”. What puzzles me is exactly why the filmmakers a film like this one was particularly important to make. It’s not very original nor does it seem to know what direction it wants to go in, it feels somewhat broken and lackluster in a lot of its scenes and despite the film’s one truly original idea (That being “Milo”), it’s not a particularly interesting film either. 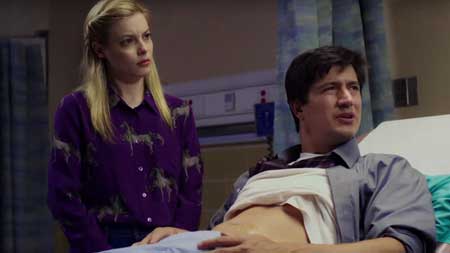 But you know what? I kinda liked “Bad Milo”! Maybe it’s just me (I’m sure it is actually) but if you’re telling me someone made a film about a dude with a demon living in his butt that crawls out and viciously kills people before crawling back inside the dude’s ass then I’m pretty sure that I wanna see it! The performances are what make the film better than the sum of its parts as a whole. Ken Marino plays Ken as a harried everyman whose a lot more complicated on the inside than on the outside although at times his role feels better suited for a sitcom than in a feature film. Gillian Jacobs is very good as his wife also, she has a wonderful bug eyed simplicity about her that make her double takes very funny to watch. The film is filled with good to great performances but it’s Peter Stomare who really runs away with the movie as Highsmith, the therapist hired to help Ken figure out his problems. Stomare feels initially a bit like a sleaze or a huckster who’s just in it for the money but it’s his character that actually helps Ken not only figure out what’s wrong with him but also figures out what needs to be done to stop Milo from making his deadly appearances from out of Ken’s ass. It’s the best performance in a film full of good ones. 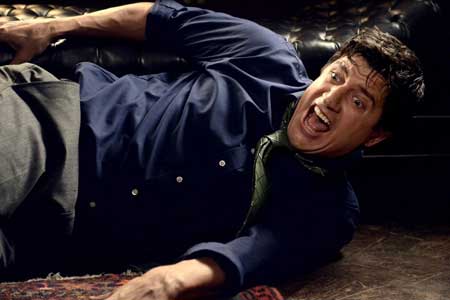 And then there’s Milo! One of my favorite things about the film is that there is very little CGI involved here at all. Milo is an animatronic puppet rather than a CGI creation and the film feels a lot more realistic (if that’s at all possible) thanks to that choice. Milo has rows of razor sharp fangs in his really large mouth and he’s a muscular little bastard as well so he’s no pushover in spite of his diminutive size. Another nice choice was to give Milo a cute voice, he sounds like Gizmo’s long lost brother with an attitude. As a matter of fact, Milo sorta looks like Gizmo if someone shaved all of his hair off. Milo’s movements are a little on the stiff side but he still feels like a complete character and he has an impish sense of humor to boot and that makes him kind of cute. There’s a great montage scene in which Ken is trying to domesticate Milo so that he can live in the real world peacefully and stay out of Ken’s butt and while the both of them are bonding it felt like a father/son relationship was forming between the two. It’s a nice little series of scenes where you will actually learn to like Milo and hope it works out for him.

Bad Milo” is really violent and bloody but that shouldn’t be an issue for anyone who’s planning to see it. If you’ve seen the trailer for this film then you know exactly what you’re gonna get. One of the more violent scenes felt like a tip of the hat to Frank Hennenlotter’s “Basket Case“ which, if I’m right, is a cool little homage to that classic of the 80’s. As a matter of fact, the film looks and feels like a homage to 80’s grindhouse classics (film grain & everything). 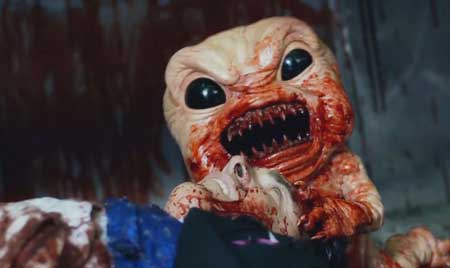 I noticed the name David Cronenberg nestled in the “Special Thanks” section of the end credits and Bad Milo does indeed feel like something Cronenburg might have attempted in his career (maybe with a lot less humor though), so it’s obvious where the film makers got their inspiration from. The fact that they fall far short from what a director like Cronenburg might’ve accomplished with the same material isn’t meant to be a knock on them or their cinematic sensibilities, it’s just the truth. But none of this means that I thought this was a bad film. Actually it is a bad film but your pal The Black Saint digs flicks like this one no end! I had fun with “Bad Milo” but not as much fun as I had expected and I think that’s my biggest gripe with the film. It might sound odd but I just didn’t feel like it was bad enough!

But I can still heartily recommend “Bad Milo” with a smile on my face and a hand over my butt hole. If I have something like Milo living inside of me I’m gonna keep him in there and if I don’t then I’m not gonna give him a chance to rent some space in there either.