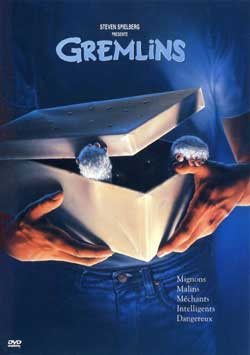 A boy inadvertently breaks 3 important rules concerning his new pet and unleashes a horde of malevolently mischievous monsters on a small town.

I was but an innocent teenager when I managed to finagle my way into a free screening of Joe Dante’s amazing “Gremlins”. Well, actually I wasn’t all that innocent but it sounded good didn’t it? I used the word “Innocent” because this movie still has that quality to it, it’s a spectacular film with lots of thrills, laughs & a few legitimate scares as well but it still maintains an air of innocence throughout it’s running time. Maybe it’s the way the film looks, the town it takes place in (Kingston Falls) is truly something out of a Rockwell painting. The people populating the town are the type of people who you’d like as neighbors (Save for Mrs. Deagle but I’ll get to her later). Jerry Goldsmith’s wonderful score soothed the audience during the opening minutes of the movie as the camera takes us on a quick tour of the snow covered trees that line the streets and sidewalks of the town. It all just feels so quaint & refreshingly sweet but it’s all a ruse! It ain’t called “Gremlins” for nothing acolytes… 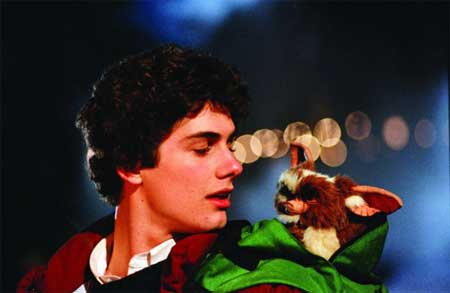 Billy Peltzer (Zach Galligan) is your standard young adult. He has a pair of loving parents & a job as a teller at the local bank. His mom, Lynn (Francis Lee McCain) is a stay at home mom & his dad, Randall (Hoyt Axton), is an inventor of oddball household products that don’t quite seem to ever work they way he says they will. As a matter of fact their home is full of his inventions (A juice extractor, egg cracker, an all in one toothbrush, etc) but all we ever see them do is make a gigantic mess. It’s nearly Christmas day and Randall is off to hawk his wares at an invention expo and hopefully find something really different to give to his son as a Christmas gift. He stops off at a small shop in Chiantown where he is introduced to a small, furry creature called a “Mogwai” (“Devil” in Cantonese) that is simply the most adorable thing on Earth. It has giant, expressive eyes and a wonderfully expressive little voice (Thanks to Howie Mandel who gave it it’s voice), the damned thing even sings! Randall has to have it to bring home but he’s denied by the owner of the shop, Mr. Wing (Keye Luke), who claims that Randall is “Not Ready” to take care of the Mogwai. Randall pleads but leaves empty handed when he’s surprised by Wing’s grandson who offers to sell the Mogwai to Randall but tells him there are three rules that MUST be followed to keep the tiny creature alive: Bright lights will kill them so they must be kept in dimly lit rooms, they must never get wet as water burns their flesh and the most important rule of all…never, but never let them eat after midnight… 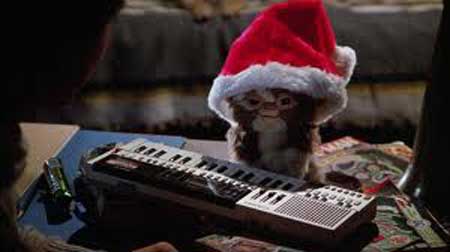 Now most if not all of you must know what happens next. Randall brings the Mogwai home to a delighted Billy and recites the three rules to him although he can’t fathom the last one. Billy names the little guy “Gizmo” and the two of them bond instantly. Gizmo is uncannily intelligent and immediately makes himself at home in Billy’s room. A short while later Billy is showing Gizmo off to a friend and some water is spilled on him which seems to really hurt Gizmo. His back starts to smoke & bubble up as he cries out in pain but those same bubbles pop off his back and have Mogwai’s in them! They look the same as Gizmo does but there’s a difference in their attitudes, they’re not as lovable as Gizmo is. They don’t like Gizmo too much & they seem to revel in mischief. They just aren’t very nice to be around and there’s a reason for that. Gizmo’s sad face on the realization that there are others is enough to tell the audience that something is really wrong with the new additions to the Peltzer family. Soon afterwards the newer Mogwai’s trick Billy into feeding them after midnight (By unplugging his clock) and shortly afterwards surround themselves in slimy green cocoons. What emerges from these cocoons give the movie it’s title…Gremlins! 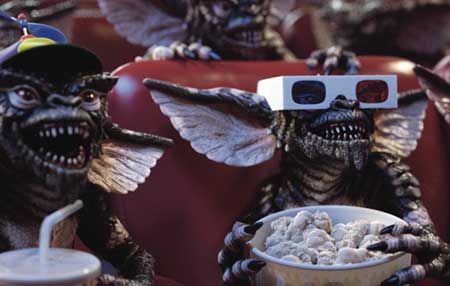 It’s at this point where the film just goes into overdrive! The titular creatures want nothing more than to create mischief wherever they go. They’re much larger than Gizmo, have long talons, sharp teeth and bad attitudes. Much like a renegade gang of Bikers they create havoc all through Kingston falls as they seek nothing more than to have a good time at everyone else’s expense, if someone gets hurt all the better! Billy feels responsible for the attack and takes it upon himself to stop them from destroying his town & spreading out to neighboring towns. Along with Gizmo & his girlfriend Kate (Phoebe Cates) he goes out to figure out how to stop them and their diabolically clever leader, Stripe (Named that for the distinctive white stripe of hair on his head).

“Gremlins” straddles a very fine line between a family film & a horror film. While the gremlins themselves aren’t out for blood they certainly don’t mind if someone gets hurt as they’re having fun. There are scenes of them attacking people and Billy’s mom has an extended scene during which she is locked in mortal battle with one of the slimy beasties where there is a tiny bit of blood shed. She eventually wins the battle by tossing the beast into the microwave & turns it on which blows it up in the film’s most repulsive scene. People are killed in the film but Dante was wise enough not to focus on that although the ruthlessly evil Mrs. Deagle (Polly Holliday) gets hers in a way that delighted both the audience & the gremlins themselves. Chris Columbus’ original script had scenes of the creatures eating people but the script was wisely toned done a bit to stay away from the dreaded “R” rating which would’ve limited it’s audience. But make no mistake, the film does have some scenes of violence that might scare younger viewers. 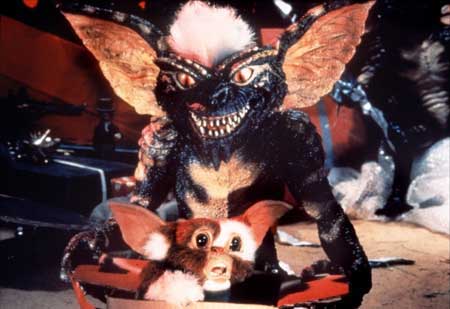 There are tons of in jokes spread throughout the film as well. Watch the scenes of the inventor’s convention to see a cameo by Steven Spielberg & the time machine from George Pal’s original film from 1960. Deagle’s cats are all named after different types of currency (Drachma, Kopeck, etc), A gremlin is seen wearing mickey ears during a showing of “Snow White”, the final battle between Billy & Stripe was inspired by “The Texas Chainsaw Massacre”. Those are but a few of the Easter eggs waiting to be discovered here.

All of the actors do well in their roles but they know that they’re playing second fiddle to Gizmo & his slimy brethren. Hoyt Axton is the standout in the film for me, his deep, reassuring voice resonates warmth & love for his family and I wish he had a bigger role in the film but he does what he’s supposed to do with aplomb. Galligan & Cates are also really good if a bit vapid. Cates has a standout moment when she tells the story of why she doesn’t like Christmas anymore (She really has a good reason to feel that way too). It’s one of many instances of the black humor that is spread throughout the film. 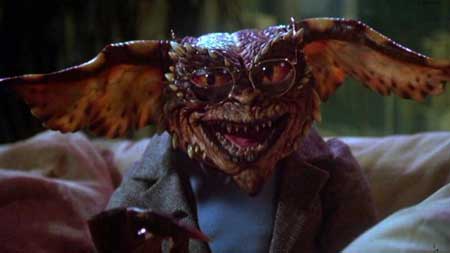 None of this would work if the creatures weren’t believable but Chris Walas’ Gremlin effects are still fairly amazing, if old fashioned, to this day. Gizmo is perhaps the most adorable creature ever and the gremlins themselves are ugly to be sure yet not too frightening. All of the effects are practical except for one scene in which dozens of gremlins are excitedly running down a street (Stop motion animation). In some instances Gizmo looks so real that you’d swear that he’s an actual animal, not a animatronic puppet. Walas’ effect work is what made the film so very unique upon it’s opening but Dante’s deft directorial hand is evident all over the film as well. 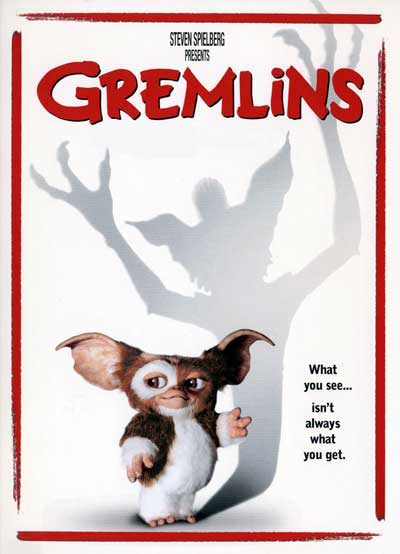 “Gremlins” was a major hit when released. It made $149 million dollars against an $11 million dollar budget in the US and had similar success overseas as well. All of this led to mountains of Gizmo & Gremlin related merchandise and as expected, a sequel (“Gremlins 2: The New Batch”) that was nowhere near as popular. Rumors of a remake have been stirring through Hollywood for awhile but as of yet nothing has materialized, let’s hope it stays that way. “Gremlins” has that special something that can never be replicated and it would be a shame if someone tried.