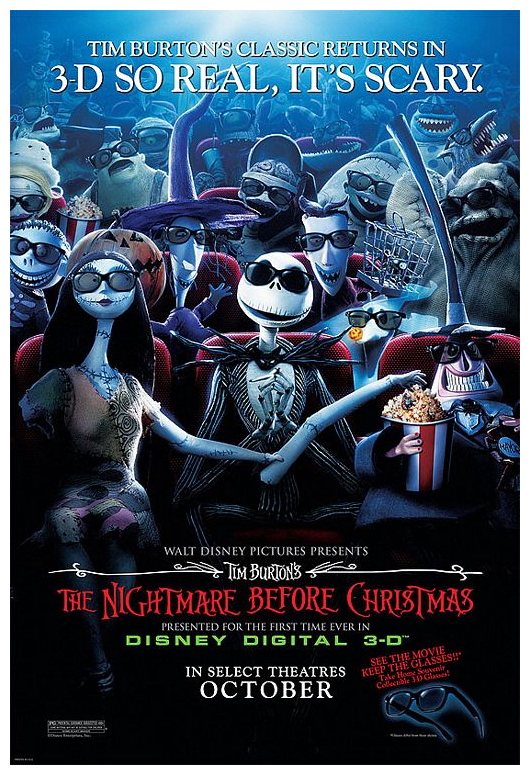 “It is the same routine every year in Halloween Town, on Halloween the monsters come out and perform a real scare. This particular Halloween the pumpkin king Jack Skellington, bored of the idea, saunters off into the woods with his dog Zero after Halloween night. Upon the break of dawn, he discovers a clearing of trees with different doors representing various holidays. The Christmas Tree door attracts his attention and upon entrance into the world of Christmas, Jack is fascinated with this new idea of Christmas that he must absolutely share with the citizens of Halloween Town.” (courtesy IMDB)

Tim Burton has become something of a one-man cult, and deservedly so, for he brought a new albeit Gothic-inclined look to eighties commercial cinema which was in desperate need of something (anything!) to redeem it from creeping mediocrity. Batman (1989) is as good as it is because of Burton’s genuine comic-book vision of a subject that lingers in the souls of most grown-up male children (the subliminal wish to be a hero) and it is Burton’s particular strength that he understands the child inherent in the man and caters to it, while bringing a demonstrably adult understanding and skill to the construction of his creations: Pee-Wee’s Big Adventure (1985), Beetlejuice (1988), Edward Scissorhands (1990), Batman Returns (1992), Ed Wood (1994), Mars Attacks! (1996), Sleepy Hollow (1999), Big Fish (2003), Charlie & The Chocolate Factory (2005), Corpse Bride (2005), Alice (2010), Dark Shadows (2011) and, most recently, Miss Peregrine’s Home For Peculiar Children (2016). One of Hollywood’s most visionary and original filmmakers, Burton’s films are often characterised by a Neo-Expressionistic style that features childhood images spliced into adult themes, and vice-versa. 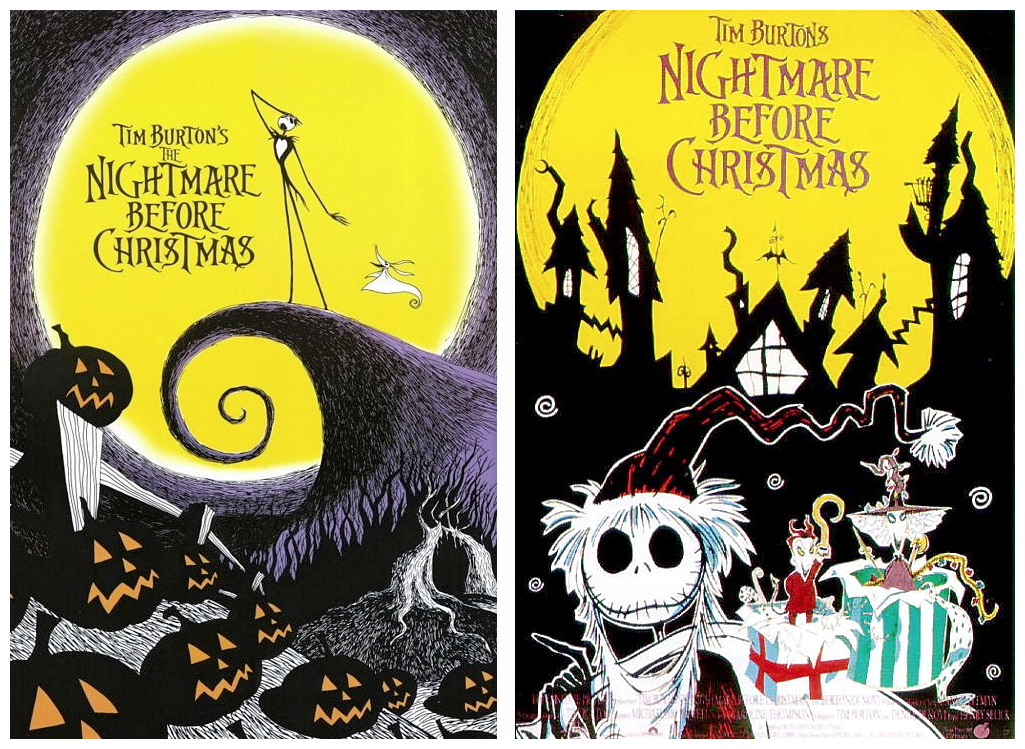 The Nightmare Before Christmas (1993) is a genuinely original slant on an overused and (for the most part) under-imaginative genre. Burton’s childhood in sunny California was not marked by seasonal changes, so holiday decorations were an important factor in the progression of each year. As the end of the year approached, there was a melding of Halloween and Christmas promotions in stores eager to make the most of both seasons. This became the seed for Burton’s tale of the king of Halloween Town attempting to take over Christmas Town. While Burton was working as an animator at Walt Disney Studios on films like The Fox & The Hound (1981) and The Black Cauldron (1985) he also tinkered with his own projects, which led to short films like Vincent (1982) and Frankenweenie (1984) as well as writing a poem entitled The Nightmare Before Christmas. A parody of Clement Clarke Moore‘s poem The Night Before Christmas, Burton’s three-page tale told of Jack Skellington’s discovery of Christmas Town and Santa Claus, and featured his ghost dog Zero. The vintage animated Christmas specials produced by Arthur J. Rankin and Jules Bass were hugely influential. Like Rudolph The Red-Nosed Reindeer (1964) or Santa Claus Is Comin’ To Town (1970), Burton thought his story could be screened annually on television. He pitched it to television studios and book publishers, but no one took interest until he repackaged it as a full-length feature film. Almost two decades had passed from the artist’s original inception to its theatrical release in October 1993.

Halloween Town is a world peopled by citizens such as monsters, ghouls, ghosts, goblins, zombies, mummies, vampires, werewolves and witches. Jack Skellington (Chris Sarandon, Danny Elfman) is a skeleton who leads the organisation of the annual Halloween holiday. However, Jack is tired of the same routine every year and looks for something more. Wandering through a forest, he stumbles across seven trees containing doors representing various holidays, and accidentally enters Christmas Town. Impressed by the cheery feeling and colourful style of Christmas without completely understanding its meaning, Jack informs friends in Halloween Town. He becomes dismayed that no one understands Christmas, and obsessively studies the holiday but fails to find any further explanation. Coming to the conclusion that it’s not right for Christmas Town alone enjoy this mysterious emotion, Jack announces that he and the citizens of Halloween Town will hijack Christmas this year. Every resident is assigned a task, while beautiful rag doll Sally (Catherine O’Hara) falls in love with Jack. However, after she has a vision of a burning Christmas tree, Sally thinks Jack’s plans will result in disaster but is unable to convince him. 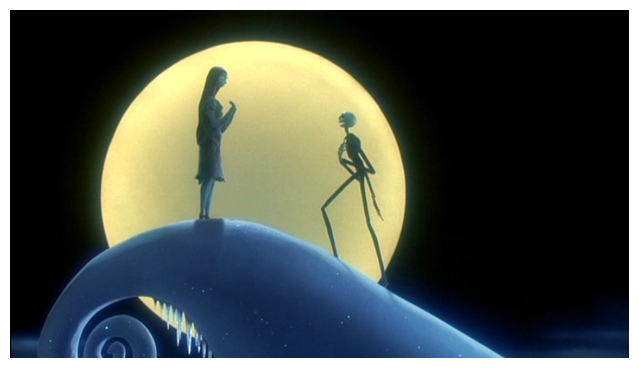 Jack assigns a trio of mischievous trick-or-treaters named Lock, Shock and Barrel (Paul Reubens, Catherine O’Hara, Danny Elfman) to abduct Santa Claus (Edward Ivory) and bring him back to Halloween Town. Against Jack’s wishes the trio instead deliver Santa to Oogie Boogie (Ken Page), an insect-infested gambling-addicted bogeyman who intends to play a game with Santa’s life. Soon it is the day before Christmas and Jack departs in a coffin-shaped sleigh pulled by skeleton reindeer guided by his dog Zero, who happens to have a shiny nose. Jack starts delivering gifts to children around the world, but the Halloween-styled presents begin to attack and terrorise each household. Jack is then shot down by the army and crash-lands in a graveyard. Although he survives the crash, he is depressed by his failure, but he quickly regains his old spirit and returns to Halloween Town to put things right again. Meanwhile, Sally has been captured by the sinister Oogie while trying to set Santa free, until Jack eventually sneaks into his lair, frees the hostages and finally confronts evil Oogie face-to-face.

Tim Burton‘s The Nightmare Before Christmas was not actually directed by Burton, but by his old Disney colleague Henry Selick, while Burton was busy wrapping up Batman Returns (1992) and gearing up for Ed Wood (1995). Burton’s name goes above the title of course, for being the creator, producer and writer, not to mention designing the characters and look for the entire movie. Burton also took inspiration from artists Ronald Searle and Edward Gorey, and attempted to recreate the cross-hatching and textures found within their works. Former Oingo Boingo front man Danny Elfman composed the soundtrack for Burton’s first feature Pee-Wee’s Big Adventure (1985) and the pair have been almost inseparable ever since, so it was no surprise that Elfman was called in to write the score and lyrics for his first full-length musical, as well as lending his singing voice to Jack. Elfman quickly became one of the most acclaimed film composers of the last three decades (rightfully so) and his score for The Nightmare Before Christmas is undoubtedly one of his best. 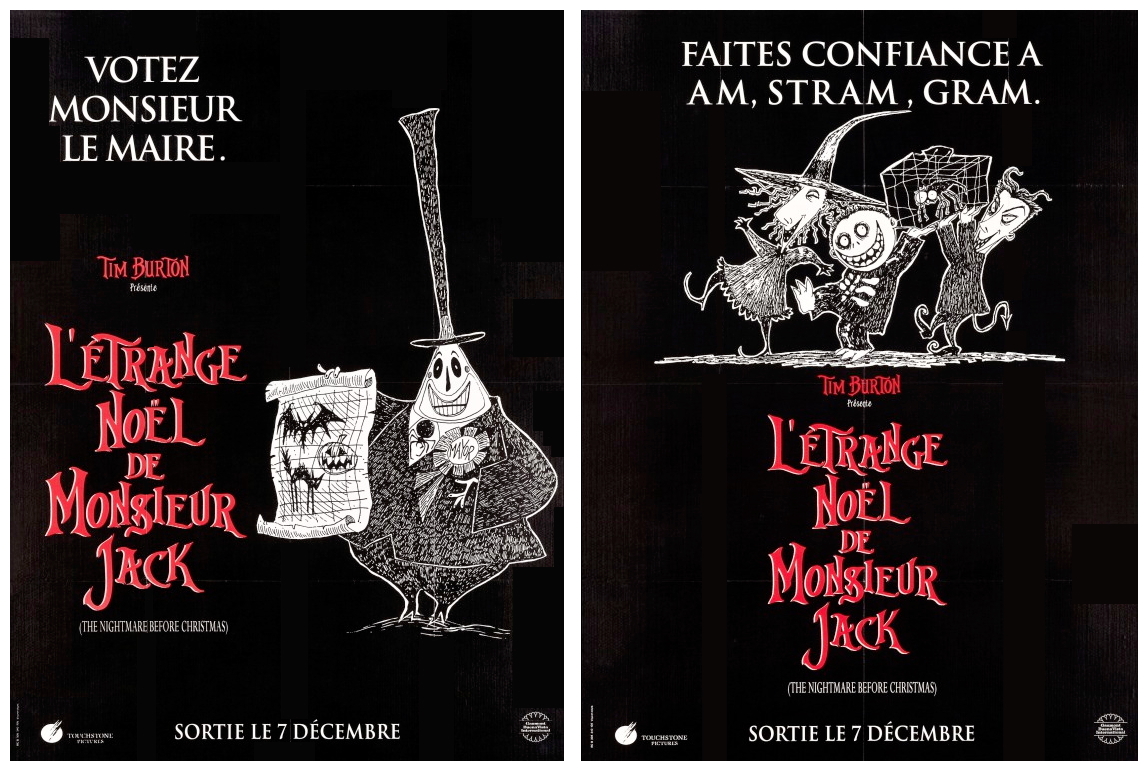 Stop-motion animation demands a great deal of time so, once Elfman had completed most of the songs, Selick hired thirteen animators and about a hundred prop makers, set builders and camera operators, and started with Jack’s first song about Christmas Town entitled What’s This? Shooting twenty-four frames per second meant the animators had to create unique motions for more than 100,000 frames. One minute of footage took about a week to shoot, and the entire film took three years to complete. Despite Burton’s reputation (four hits in a row garnering over US$400 million at the box-office) Disney executives were still unsure, and insisted Jack be given large friendly eyes, normally considered crucial to having an audience connect with a character, but Burton refused to budge and ultimately proved his anti-hero didn’t need eyes to connect. Because of the dark and weird nature of the film, Disney decided it was too off-brand to be released under their banner, so the film was distributed by their ‘adult’ banner of Touchstone Pictures. After raking in more than US$170 million all was forgiven, and The Nightmare Before Christmas was re-released in 2006 with the Disney logo. 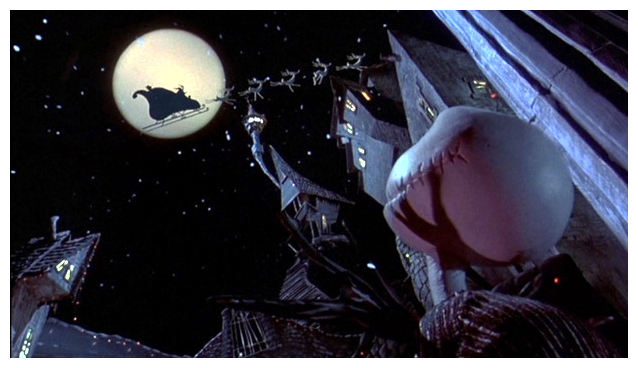 Much credit is given to Burton and Selick for their work on the film, but a lot should also be attributed to co-designer Denise Di Novi, visual consultant Rick Heinrichs and cinematographer Pete Kozachik. Along with the talented voice actors, The Nightmare Before Christmas results in a triumph of artistic ingenuity. Some may dismiss it as too strange or too stylish but, for its fans, it is one of Burton’s finest accomplishments. This classic holiday movie will always hold a special place in many hearts, a wonderful and charming story that is original, funny and moving. You can see the love that was put into its creation, all the characters are likeable and a real pleasure to watch as they bring this dark comedic tale to life. With Pixar currently dominating the world of animated movies it’s easy to forget that Burton delivered this delightful family film to the screen using traditional stop-motion animation and a huge amount of imagination. The basic plot is a terrific little fairytale with a very dark edge to it that makes it far more enjoyable for having that edge. Too often children’s films are soaked in a sweet sentiment that simply forgets that kids are not stupid and indeed prefer a bit of nastiness in the story. 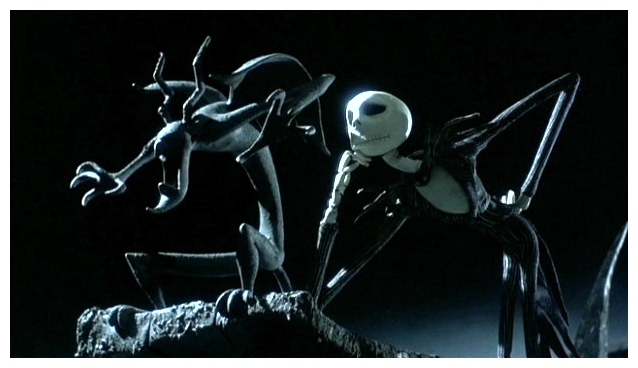 The material plays equally well to adults and children because it neither panders to nor excludes one group over the other at any time. It manages to be charming and enjoyable thanks to a well-written script that never tries for the basic laugh or easy sentiment. Some viewers may bemoan it for not being hilariously non-stop funny, but they’d be missing the point. Though Disney has found success pumping out straight-to-DVD sequels of their animated hits, Burton has absolutely no interest in making The Nightmare Before Christmas Part II: “I was always very protective of Nightmare Before Christmas, not to do sequels or things of that kind. You know, ‘Jack Visits Thanksgiving World’ or other kinds of things, just because I felt the movie had a purity to it.” At this juncture I’ll politely ask you to please join me next week when I have the opportunity to tickle your fear-fancier with another feather plucked from that cinematic ugly duckling known as…Horror News! Toodles!

The Nightmare Before Christmas (1993)