Land of Shadow and Substance: The Monsters Are Due on Maple Street

Written by Rod Serling, paranoia is the subject of this episode, powerfully directed by Ronald Winston, as neighbor turns on neighbor in a mob mentality that, oddly enough, seems to continue to ring true even today. 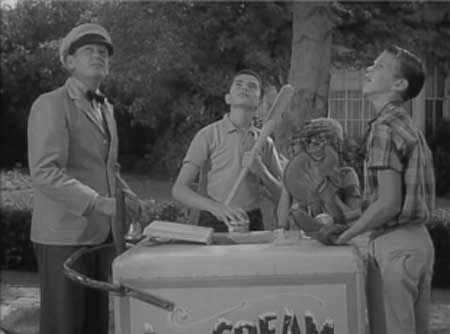 Actually filmed on Andy Hardy Street at MGM, this tale of prejudice, suspicion and mistrust, having close similarities to the Spencer Tracy film Fury, is considered one of the more well-known episodes.

Coincidently, the alien costumes were borrowed from film The Forbidden Planet, as was the episode’s final saucer flying away shot, changed by inverting and running it in reverse.

Maple Street is the epitome of 50’s America, calm and peaceful with familiar and friendly caring neighbors simply happy to co-exist. Today, all are typically enjoying the summertime, washing cars, drinking lemonade and tinkering about.

As children obtain ice cream from a cart vendor, an odd flash of light appears overhead, which most of the residents notice. Immediately there is a mysterious and total power outage affecting all electrical based objects, including telephones and automobiles.

Pete Van Horn (Ben Erway), a geriatric gentleman who was busy constructing, finds that his power saw is inoperable and mentions to neighbor Steve Brand (Claude Akins) that he is going to go over to the next street to inquire as to whether they are experiencing the same situation and walks away. 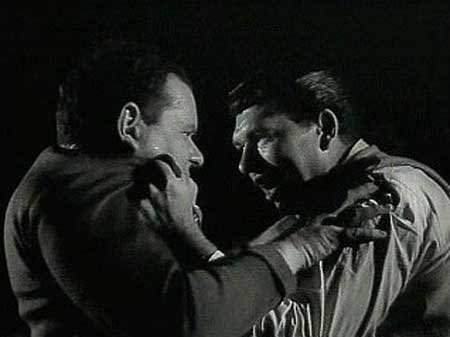 On the sidewalk, the remaining neighbors huddle in a cluster with each providing a reason such as a meteor or sun spots. Steve decides to go to the police station seeking answers, but his car won’t start. This is where the mob mentality, (the true star of the show) and paranoia begins to set in. Steve, accompanied by Charlie Farnsworth (Jack Weston), having decided to walk to the authorities, turn away and start heading down the sidewalk.

Tommy (Jan Handzlik), a young connoisseur of science fiction, calls out to them with his opinion, based on a recently read tale, and says that he knows what is happening. He goes on to explain that it is some sort of alien invasion in which a few human looking ones were sent ahead as infiltrating scouts. He pleads with them not to go, that they wouldn’t want them to leave, and if they did, they just might not make it back.

Initially, Tommy’s theory isn’t taken seriously and is even laughable. However, when Mr. Goodman’s (Barry Atwater) car suddenly and inexplicably starts on its own, Tommy’s concept seems more real than not and Goodman becomes the first to fall under fearful suspicion. Even more damning is the fact that his neighbor lady (Joan Ludlow) has, on numerous occasions, seen him traipsing about his yard in the small hours, looking up to the sky. Goodman tries justifying and attributing the late night/early morning walks to insomnia, but the crowd has trouble believing him. 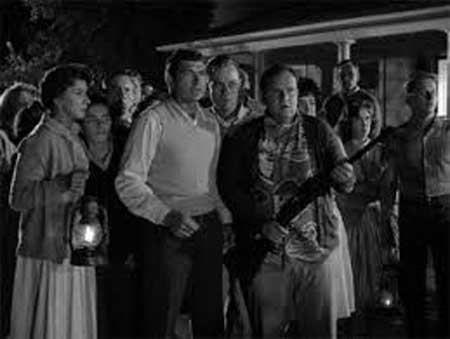 Darkness sets in as Steve, attempting to retain some sense of normalcy and remain logical, tries to keep the residents rational and calm. From the shadows at the end of the street comes a slow walking figure. Alarmed with dread, the crowd panics and Charlie grabs a neighbor’s gun and fires. The potential threat crumples to the street, having been killed.

The crowd rushes to the collapsed body, finding that it was simply Pete Van Horn returning. It is now Charlie who falls under suspicion as everyone begins assuming that he killed on purpose to keep his secret hidden. Tommy is soon accused also, since he seemed to know exactly what was occurring. Within moments, as lights begin flashing in the homes, lunacy and madness descend on the residents and a small scale riot begins.

From a nearby hilltop overlooking the street, two aliens stand before their saucer, controlling an electricity manipulating machine and watching as the scene unfold. One explains to the other that by controlling the human energy sources, man will typically turn on one another and eventually destroy themselves; that every single street in America is similar to Maple Street and therefore, war is essentially un-necessary.

Next time – A World of Difference

Tags The Monsters Are Due on Maple Street The Twilight Zone