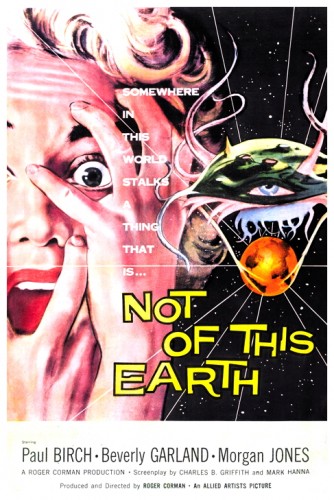 SYNOPSIS:
“An alien agent from the distant planet Davanna is sent to Earth via a high-tech matter transporter. There he terrorizes Southern California in an attempt to acquire blood for his dying race, the result of a devastating nuclear war.” (courtesy IMDB)

REVIEW:
For more than half a century, my old friend Roger Corman has been somewhat of a maverick in the film industry. He’s been a writer, a director, a producer, a distributor and occasional actor. He knows the business inside-out and like all good businessmen, he’s had to keep an eye on the almighty dollar. Steven Spielberg and James Cameron have to keep their eyes on the dollar too, and if you don’t believe me, you’re ignoring the box-office. You can’t make movies if your movies don’t make money – unless you’re Dino De Laurentiis, that is. But if money was Roger’s only concern, I suspect he could have made a lot more money selling real estate. The fact that his films were consistently superior to his competition suggests that he simply enjoys making movies. In 1957 screenwriter Charles B. Griffith told Roger it was time to do another science fiction picture. Roger asked if Griffith had something particular in mind, and Griffith said, “Yeah, a guy with X-ray eyes that zaps people!”

It took him a month to write it. His wife at the time was a nurse and she gave him a lot of the information he needed to make the medical technobabble more believable. It was also one of the first science fiction films to deal with both mental telepathy and matter-transmission. On the planet Davanna, prolonged atomic warfare has created a race of people whose blood is literally evaporating in their bodies, which means they require daily transfusions. Looking for fresh blood, and hoping to find a cure, one of these aliens is sent to Earth. Using the name Paul Johnson (Paul Birch) and sporting a pair of thick dark sunglasses to conceal his egg-white eyes which can burn right into a person’s brain, the alien seeks help from Doctor Frederick Rochelle (William Roerick). Johnson hypnotises Rochelle to make him work on a cure without discussing the matter with any of his colleagues. Rochelle gladly lends Johnson his nurse, Nadine Storey (Beverly Garland), so she can give Johnson his necessary daily transfusions of blood.

Nadine’s boyfriend, a police officer named Harry Sherbourne (Morgan Jones), doesn’t like this set-up at all. Johnson seems like a cold fish to him, and Johnson’s chauffeur is a two-time loser named Jeremy Perrin (Jonathan Haze). Both Nadine and Jeremy become suspicious of Johnson and do a little snooping, leading to the discovery of a secret panel concealing a strange machine which, unbeknownst to them, is a matter transmitter which Johnson has been using to teleport live human specimens back to Davanna. Meanwhile, a female Davannian (Anna Lee Carroll) arrives to inform Johnson that the specimens he sent arrived crushed so he needs to send more as soon as possible. The alien is also in need of an immediate transfusion, so they break into Doctor Rochelle’s office for some blood, unaware that Rochelle has been experimenting with blood from a rabid dog.

The female Davannian staggers into a hospital and dies. Since the dark sunglasses she’s wearing are identical to Johnson’s, and her blank eyes indicate she’s from another planet, Harry puts two-and-two together and heads for Johnson’s house. Johnson returns home and catches Nadine and Jeremy at the matter transmitter machine. He fries Jeremy’s brain with his X-ray eyes and chases Nadine through the woods and, in a final car chase, Harry catches up to Johnson and turns on his police siren. Johnson can’t stand loud noises, loses control of his car and plummets over the edge of a mountain road to his death. Later, as Harry and Nadine walk away from Johnson’s gravestone (“Here Lies A Man Who Was Not Of This Earth”) another stranger approaches wearing dark sunglasses. 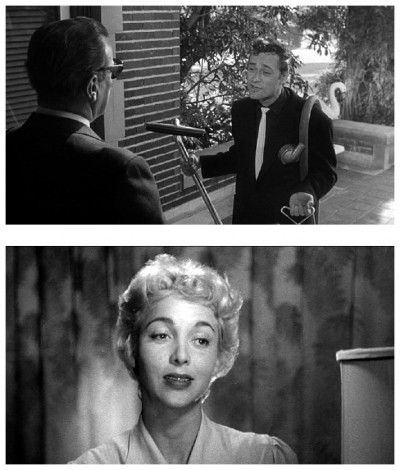 According to Griffith, his original screenplay contained many other ideas that were not filmed due to time or budget restraints. “It had other things that didn’t get shot. You know, during the war it was illegal to sell yellow margarine because of the butter interests, so they’d sell white margarine in a plastic bag with a yellow food capsule inside. I had something like that in Not Of This Earth where the invader broke a capsule and mixed it in a bathtub full of water that turned into a big dog. I wanted a great dane to be dressed in a monster suit with a crocodilian mouth on it and everything.” Instead, low-budget monster-maker Paul Blaisdell designed a jellyfish-like thing that flew through the air. In one of the most gruesome moments in fifties films, Blaisdell’s creature envelopes the head of Doctor Rochelle and, as he struggles to remove it, a trail of blood oozes from his head which is completely covered by the creature, and collects in a pool on the desk in front of him.

“I believe he was getting a fixed rate to do a picture – so many thousands of dollars. Now, he could do the picture in two days or two hundred days, but he’d still get the same amount of money. So he would start a panic and do it in two days. From a business point of view there’s nothing wrong with that, but from the standpoint of theatrics and narrative technique, Shakespeare he ain’t. I do have some admiration for Roger, I did like some of the pictures he went on to do like Fall Of The House Of Usher (1960) and stuff like that which was really good – not the grade-B stuff he hammered and tried to rush out for AIP.” 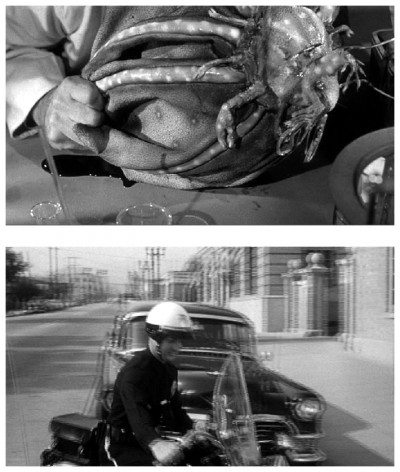 Since it was economically imperative for Roger to ‘hammer’ out his productions, Blaisdell’s ability to design and create monsters and props with remarkable efficiency and speed made him one of the most valuable members of Team Corman. Yet when both Roger and American International Pictures moved on to bigger-budgeted films in the early sixties, Blaisdell fell out of favour and was more-or-less forgotten by everyone but his most devoted fans until the late eighties, when a Japanese company began manufacturing a line of impeccably accurate monster model kits. Blaisdell’s creations proved to be the most popular of the lot. It’s unfortunate that he didn’t live long enough to enjoy this resurgence, sadly passing away of cancer in 1983. He’d spent his later years in seclusion wondering why Hollywood had left him behind. 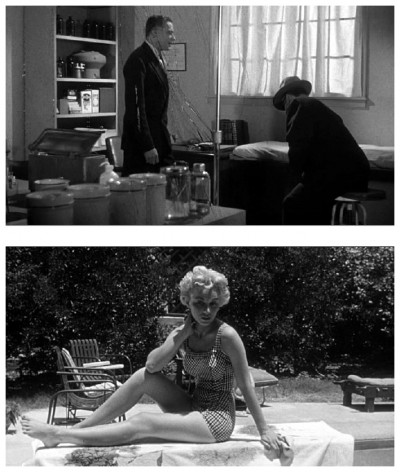 Blaisdell also created the matter transmitter seen in Not Of This Earth. “Rog just wanted a teleportation machine so I said, ‘Okay, you get a teleportation machine.’ I didn’t have much time to build it and I wish I could have designed it better. I would have liked it to look a lot jazzier than it did, but there was no time. At least you got the framework and the lights, as you know from seeing the movie. So I guess, such as it was, it did the job, but wouldn’t we all like to see it done better if we didn’t have to have it ready ‘yesterday’ for Rog?” As well as being one of the first films to contain matter-transmitting and mental telepathy, Not Of This Earth is also one of the first pictures to use contact lenses as part of its makeup, specifically to create the white-eyed alien, as worn by actor Paul Birch.

“Roger had Paul wearing contact lenses. I’m not talking about the ones you slap on your cornea, I’m talking about the full-size ones which can become very painful after a few hours. And Roger just had Paul sitting around between takes all ready to go. A couple of hours passed and Birch felt like his eyes were burnt holes in a blanket. Then he took the lenses out and his eyes hurt so bad he couldn’t see straight.” Birch finally got so angry about it that he and Roger got into a fight on the front lawn of the house where much of the picture was filmed. “It was a farce and came to nothing really. They took off their glasses and squared off, pushed and shoved and so on.” Which ultimately led to the actor walking off the picture. Fortunately for Roger, most of Birch’s scenes were already in the can. A stand-in was used in a couple of sequences and, since Birch wore dark sunglasses through most of the film, it was easy to palm-off a substitute.

The double can be spotted when Johnson first enters Rochelle’s office, sitting in the waiting room and reacting adversely to a loud noise. Later, he’s the one who accidentally gives the rabid blood to the woman from Davanna. Actress Beverly Garland hit the nail right on its proverbial head when she said, “I really believe Roger can get around just about anything.” I’ll leave you to ponder these insightful words, but not before thanking Mark Thomas McGee and Carl Del Vecchio of The Beverly Garland Fan Club Journal for their vital assistance in my research for this article, and I look forward to your company again next week when I have the opportunity to freeze the blood in your veins with more sickening horror to make your stomach turn and your flesh crawl in yet another fear-filled fang-fest for…Horror News! Toodles! 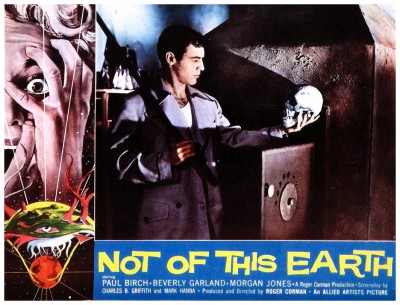