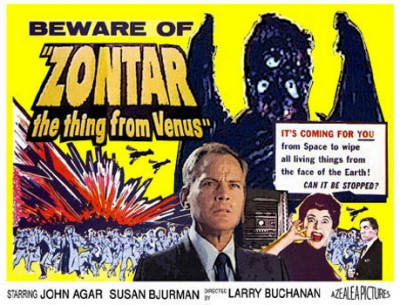 SYNOPSIS:
“A misguided scientist enables an alien from Venus named Zontar to come to earth in order to help solve man’s problems. However, Zontar has other ideas, like disabling the power supply of the entire world and taking possession of important officials with mind control devices.” (courtesy IMDB)

REVIEW:
This week I wish to discuss a well-intentioned scientist who brings an alien from Venus to Earth to help solve man’s problems, but the evil alien has other ideas involving mind control. If you think that sounds a bit like the Roger Corman film It Conquered The World (1956), you wouldn’t be far wrong. It’s actually Zontar The Thing From Venus (1966). You see, in the sixties, Larry Buchanan was contracted by American International Pictures to remake some of their already impoverished films as part of a television package. These became a ready-made late-night movie program – insert one hammy horror host with an assortment of bad puns, and you have your late Friday night time-slot taken care of. Hey…

So AIP films like The Day The World Ended (1955) and The Astounding She-Monster (1957) were remade at a fraction of their already minuscule costs – not since Mary Martin gave birth to Larry Hagman has a Texan done such an outrageous disservice to the entertainment industry. Nonetheless, Mr. Buchanan persevered and delivered unto us his own version of It Conquered The World starring John Agar, Tony Huston, Andrew Traister, and a dozen other names you’ve never heard of before or since. Prepare to be probed by Zontar The Thing From Venus!

According to legend, Larry Buchanan was the only director ever to edit his films using duct tape. This may not be true, but it sounds as though it should be – Larry was commonly known as a untalented cheapskate. For instance, NASA has been apparently downsized to only four scientists who spend their time reviewing stock footage of rocket launches. I’m reluctant to start mocking Zontar The Thing From Venus for fear I won’t be able to stop, so I’ll discuss the, um, latent talent in front of Larry’s 16mm camera instead. I almost feel sorry for the actors. Almost. Not just for being stuck in a film this bad, but for having to look threatened by those flying yabbies. I especially felt sorry for actor Tony Huston for having to say his dialogue without smiling.

Tony Huston plays Keith with real relish, probably because this is his most prominent role ever. As an actor, no-one would hire him, so he decided to write his own screenplays, then insert himself into them. As a result, Tony wrote seven films and appeared in a total of seven films, including Comanche Crossing (1968), Curse Of The Swamp Creature (1966), Mars Needs Women (1967) and The Eye Creatures (1965), which I hope to inflict upon you soon. Tony Huston has often been confused with the talented writer Walter Antony Huston, son of director John Huston and brother to Anjelica. Even the IMDB mistakenly lists Tony’s real-life wife, Pat Delaney, as John Huston’s daughter-in-law. You shouldn’t believe everything you see on the interweb, unless you’re reading this on-line. In which case it’s all true!

Pat, who plays John Agar’s suffering wife, probably had more decent roles than any other member of tonight’s cast, albeit on television. Starting in the long-running soap opera General Hospital in 1963, she was able to shake-off the stigma of Zontar The Thing From Venus and go on to appear in dozens of television shows including I Dream Of Jeannie, The Big Valley, The Courtship Of Eddie’s Father, Ironside, Ellery Queen, The Sixth Sense, Shaft, Mannix, The Streets Of San Francisco and The Rockford Files, reaching the pinnacle of her success in 1975 starring in the Irwin Allen series Swiss Family Robinson as Helen Hunt’s mother – Family Planning could have helped there. After the mid-seventies it was all downhill for Pat, appearing in Switch, Charlie’s Angels, Barnaby Jones, Falcon Crest, Simon & Simon, Airwolf, Murder She Wrote and Seventh Heaven, only to end up back where she started more than four decades earlier, in the long-running soap opera Days Of Our Lives.

Neil Fletcher, who plays General Young, appeared in a total of eight films, mostly as a series of nouns such as Survivor, Chief, Secretary, you get the idea. The most high-profile appearance Neil ever made was as Gravedigger #1 in Deadly Blessing (1981), Wes Craven’s second worst film ever and, as far as I remember, he wasn’t even allowed to say much.

Would you believe Andrew Traister, who plays Sergeant Magalar, is still working today? A total of five films in half a century – and you thought Stanley Kubrick took his time between movies! Andrew’s most recent appearance is in an epic comedy called Mommy And Me (2012) due for release this year, which is described as a cross between Pretty Woman (1990) and Arthur (1981) in diapers – make of that what you will. I looked it up on IMDB only to discover it’s just one of five motion pictures called Mommy And Me produced in the last four years! Hollywood does it again…and again…and again…and again!

John Agar, who plays Doctor Curt, once starred alongside the great John Wayne in The Sands Of Iwo Jima (1949), Big Jake (1971), Chisum (1970), The Undefeated (1969) and She Wore A Yellow Ribbon (1949), but was eventually relegated to B-grade movies such as Tarantula (1955), The Mole People (1956), Brain From Planet Arous (1957), and the Lucille Ball vehicle The Magic Carpet (1951). In 1945 John became Shirley Temple’s first husband, and they worked together in Fort Apache (1948) and Adventure In Baltimore (1949), but the contract…I mean, marriage lasted only five years. He married model Loretta Combs in 1951, the two remaining wed until her death in 2000, and reunited a year later – thanks to John’s emphysema. He’s memorialised in Frank Zappa’s The Radio Is Broken, and The Young Fresh Fellows songs The New John Agar and Agar’s Revenge.

Strangely, the most talented name attached to Zontar The Thing From Venus doesn’t even get a credit – composer Ronald Stein. Not only did Larry Buchanan remake AIP films, he also raided their music library. Ronald Stein was assistant musical director for the Saint Louis Municipal Opera in the early fifties, and it was at this time he wrote to the various music department heads at the film studios in search of advice. He received only one reply, from Lionel Newman at 20th Century-Fox who simply said, “Don’t come.” He chose to ignore this sage advice, and from 1955 to 59 he was the music director of American International Pictures, which just goes to show how right Newman was. Both Ron Stein and Les Baxter were staff composers at AIP for many years and though they never actually met, they co-scored at least eight movies together. Ron’s most popular compositions include Raymie, Mexico City, Romantic Idyll, and The Garden, as well as the film scores for Dime With A Halo, The Littlest Hobo and Of Love And Desire. His most dubious contribution to the arts is teaching Francis Ford Coppola how to play the tuba.

I think I’d rather be on Venus without any protective clothing instead of watching Zontar once more. I swear, I’ll never say another bad word about Michael Bay again – well, maybe less often – or am I being too hard on Larry? With a reported budget of only $35,000 – most of which went to John Agar, and the rest on the Zontar suit – it’s amazing this movie even exists. Larry couldn’t afford to go for a lot of futuristic looking props, and instead had to rely on surplus electronics, with the odd benefit that his high-tech gear actually looks more realistic, except for that Jacob’s Ladder merrily buzzing away. There’s no denying that Larry’s films are marred – or made distinctive – by his inexperience and inability to figure out where to put a camera or when to cut away to another angle. Yet somehow, forty years later, here we are watching them over again – like aircraft accident footage – trying to work out what went wrong. I’ll now take my leave of you with that frightening thought in mind, trusting to see you next week after I have scraped the bottom of the Public Domain to find another rotten apple to throw at you from…Horror News! Toodles!