Home | Behold The Awesomeness That Is DEXTER: THE COMPLETE SERIES

It’s a given that Comic Con is going to spew out a shit load of cool information, it goes with the territory but this one ranks up there as some of the coolest ever.

Get a load of this incredible collectable packaging for the Nov. 5th release of DEXTER: THE COMPLETE SERIES. 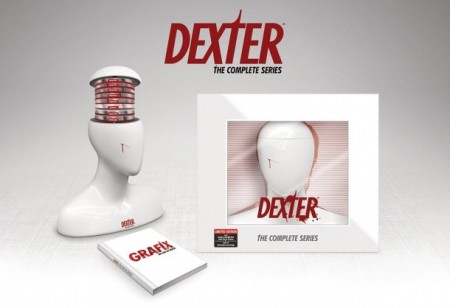 I don’t know about you but I am a bit partial to the “slide box” packaging but they are both pretty damn cool.

I’m sure we’ll be getting an official press release on this whole thing soon and there are a lot of different things being reported around the net, nothing confirmed mind you but what does appear to be fact is that the the DVD collection will hold 33 discs while the Blu-ray will have 25 discs. A whole slew of special features will be included and both sets will include a book titled GRAFIX which will highlight the amazing promo artwork through the years as well as some fan art and other assorted goodies.

Pricing is a bit much with the DVD collection getting a SRP of $352.99 and the Blu-ray a whopping $427.99. Might have to take out a loan for this one. It will be well worth the dough though. Some of the coolest packaging I have ever seen!

Watch the site for updates!!