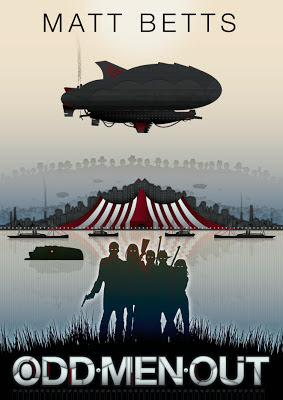 “Look around you. You’re on a military vehicle. They said it themselves- they fight people. That seems to run counter to keeping you safe and my blood inside of my body.”

I’m not a good cook. It took me far too long to learn that, no matter how awesome chorizo, oregano, cabbage and mangos are, they shouldn’t go in my French toast. The tastes will fight each other for attention, not allowing me to taste any of them and the result will be confusing to my pallet, at best. That ‘s kind of how I feel about my experience with Odd Men Out. It has a whole bunch of awesome, but there was a bit too much going on to keep track of what was supposed to matter.

The story has a simple enough basis: An unlikely and disparate group of misfits (heretofore referred to as the O.M.O.) bands together to stop a plot by the big bad guys. Okay, there is a bit more than that going on: Mid Civil War, the fighting on both sides has stopped because zombies. A group called the Sons of Grant is rather peeved that they didn’t get to run rampant over those filthy rebs and has found a secret weapon that they think might wipe the Confederate government out completely. There is also some stuff about a circus magnate (perhaps a PT Barnum stand-in) and a giant lizard that may or may not be of oriental origin. And the leavings of a genius/mad scientist.

The core story, about a single minded individual driven by powerlust and an unwillingness to let go of his bitterness in the face of a much larger problem and the humble men and women who find they have no choice but to try to stop him, is a great one. I wanted to dive into that and drown. I liked the members of the O.M.O. and the idea of regular people stepping up in the face of general buttheadedness. I was concerned once the previously mentioned single minded man got ahold of a WMD. I was invested in that conflict.

However, the narrative was a bit too scattered for my taste. Yes, there were zombies, but they didn’t seem to matter much besides providing a threat worth setting the Civil War aside for. Even then, I had a hard time taking them seriously since they barely made any appearances and were usually dealt with quickly. Yes, there was a giant lizard, but I failed to see where it mattered in the plot. That sublplot was so ancillary that I didn’t even notice when it was resolved. I had to go back at the end to find out what happened to the giant lizard that had been destroying a major city. Also, the characters were too spread out and I had a hard time parsing who was where doing what. Maybe it‘s because I’m a shitty reader, but it still created a problem for me.

The biggest issue, though, was how much I adore Matt Betts. I know him from poetry and short fiction where he shines and dances like a shimmery bit of fetchlight. His voice is distinctive, confident and always means that a good time is about to be had. That’s why I was sad to be left wondering where that voice went while reading Odd Men Out. Every once and awhile a line or a paragraph or a moment of unbridled Matt Betts-iness would appear (like the quote at the top of this review) and there would be much rejoicing, until it faded away again. That made me sad because I missed his voice.

There’s a solid heart to the Odd Men and I wanted to enjoy this story. All the same, I had a hard time cutting through so much of everything and it made it hard for me to enjoy the experience.

Buy it this August from Dog Star Books.
Share