Mid summer and the talk of October TV has already begun. To be expected though with SDCC barreling towards us it only stands to reason that one of the big topics is going to be the hit series THE WALKING DEAD and who better to spill some beans on what is heading our way then the creator of the whole thing Robert Kirkman.

Robert talked to THR about things and he dropped some pretty hefty details.

When asked about how Season Four will evolve he said:

“It’s a much more character-based story. It’s going to be more focused on who these characters are and what they’re going through. To a certain extent, we got away from that a little bit in season three. Coming into season four, we’re definitely going to know a lot more about these people so it will be that much more gut-wrenching and worse when we lose these characters.“

And on how Season Four will kick off:

“There’s going to be a bit of a time jump. Some time has passed between season three and season four. It’s only a few months, we’re not nailing down the exact number of days or anything like that. The prison that we see is a very different prison and the characters that we see are very different from the last time we saw them. We go into season four with characters you’ve known for four years and still find new things to explore with them and new aspects of their character and see that they are growing and changing in extremely dramatic ways due to the strains that this world has put upon them.”

Probably the most interesting conversation took place about the future of Carl on the show:

“That’s something that has become huge part of Carl’s character. That event and the fact that he did that. It’s something that Rick has been somewhat terrified by; the fact that his son went to that place and is growing into that person. That’s informing both Rick and Carl’s actions as they move into this season. There are more people around, there are people from Woodbury that are now living there and Carl is having to deal with this. His behavior is being guided by Rick and his role as father to him. There’s some interesting stuff coming up with Carl that I can’t reveal right now but there’s good stuff ahead.“

Also some interesting points about Andrea’s departure and the future of Michonne so make sure to check out the entire interview at THR. 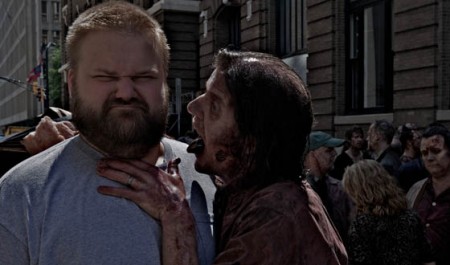