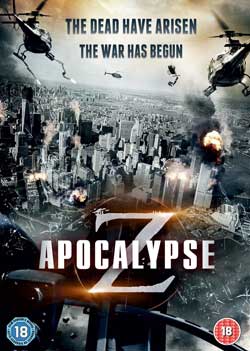 A bacteriological weapon developed by the Us Government to create a super soldier – spreads an epidemic in a quiet little town in the middle of Eastern Europe. All citizens have been turned into infected zombies. The plan is to bring an atomic bomb into the city’s nuclear plant to pretend a terrible accident occurred. No one has to know the truth. A team of mercenaries is hired to complete the mission. The battle is on. Hordes of monsters against the team. Who will survive?

Ditching its original and much lamer moniker of “Zombie Massacre” in favor of a commercially viable title, “Apocalypse Z” immediately gained favor by not being an Asylum rehash.  After a strangely artful opening sequence detailing the initial days of an undead invasion, the credits offer a stylish breakdown of the military’s campaign against the monstrous hordes, featuring impressive make-up and CGI gore effects.  It was all going so well, until the words every horror fanatic dreads appeared on the screen:  “Produced by Uwe Boll.”  Uwe.  Freaking.  Boll.  This is what we critics refer to as a “bad omen.”

For those blissfully unaware of Boll’s dubious career, a brief summary:  He sucks.  All right, perhaps a not-so-brief summary is in order to make my point here.  Since his appearance on the scene in the 1990’s, Uwe Boll has been the driving force behind some of the most pathetic excuses for horror films in the last twenty years, including such infamous titles as “House of the Dead” and the excruciating “Bloodrayne” series.  Don’t even get me ranting about his stabs at genre comedy, with truly tasteless offerings such as “Postal” and “Blubberella.”  From his penchant for casting barely intelligible amateur performers to direction and production design that make Grandma’s video of your 2nd grade Christmas pageant look like the latest Cameron blockbuster, there is no denying Boll’s place in cinematic history.  At least old Ed Wood bombs are good for a chuckle and carry their creator’s misguided, tireless adoration of the medium.  Boll seems to not only hate motion pictures, but those who watch them as well. 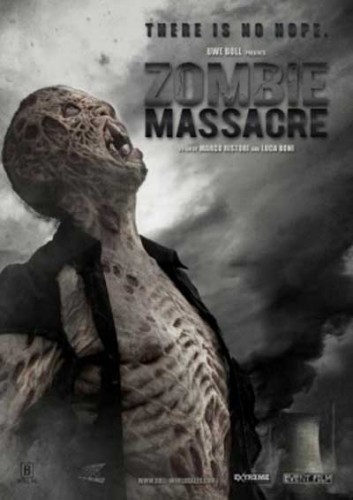 A few of the maestro’s touches are present in “Z,” the most noticable being the parade of bizarre dialects that bear absolutely zero relationship to the characters the actors are portraying.  Once Boll himself appears as the United States President complete with thick German accent that sounds straight off the boat at Ellis Island, you’ll give up trying to figure out where any of these people are supposed to be from.  For the record, most of the thespians involved are playing true blue Americans, though I suspect a couple of the actors were merely reciting an unfamiliar language phonetically.  On the plus side, the performances are Oscar caliber compared to “Alone in the Dark” (another Boll filmed video game), and no sign of Christian “Talking Like Nicholson Is Acting, Right?” Slater in the cast.

The plot utilizes the same “Aliens” template we’ve seen regurgitated approximately three thousand times since 1986, as a band of badass merceneries are hired to infiltrate the quarantined village in Romania where the outbreak began.  The mission is simple: Drop off a bomb at the nuclear power plant and make it back to the helicopter in one hour before the entire city is wiped off the map.  Our soldiers of fortune consist of sharpshooter Dragan (Daniel Vivian), demolitions expert Mad Dog McKellen (Mike Mitchell), and Barbara Streisand impersonator Eden, played by Tara Cardinal.  Apart from her Vegas day job (I may have invented that part), Eden is also no slouch with a samurai sword.  Leading the ragtag team is Jack Stone, a former U.S. soldier and quite possibly the only American in the entire cast.  As portrayed with cue card-reading aplomb by Christian Boeving, Stone is serving a stretch in military prison for reasons later revealed and completely inconsequential to the plot.  Upon completion of the task, he is promised his freedom as well as custody of his young daughter, who has apparently been hanging around General Carter’s (Carl Wharton) office since her father’s incarceration. 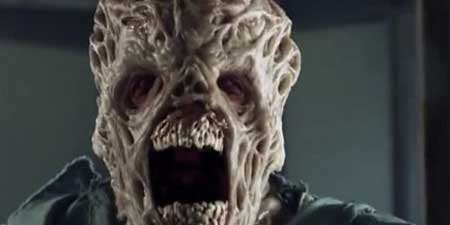 If only the inconsistencies and glaring lapses in logic ended there.  The entire operation begs the nagging question, Wouldn’t it be much safer and more efficient to fly a plane into the hot zone and just drop a bomb on the target, ensuring success?  This query is sort of answered after Dragan meets his bitey demise and the group stumbles upon Sam (Ivy Corbin), daughter of the scientist who originally created the virus.  Locked up in the local jail for disorderly conduct, Sam holds the key to a cure for the infection, as she was bitten and survived an undead fate via a secret vaccine.  Somehow, not only had the government lost complete track of this walking miracle, but so had her own dear ol’ dad, regardless of the fact that he had to have been in close proximity to the young woman in order to cure her.  How the hell did he get away once the proverbial dookie hit the fan without busting his kid out of the drunk tank on the way?  The “Whaaaa . . .?” moments come fast and furious, from the questionable sword-fighting skills of Young Babs to the gang’s insistence that they’re running out of ammunition just moments before blindly firing into a crowd of zombies.  This happens several times throughout the film’s run, yet the supply of bullets never seems remotely depleted. 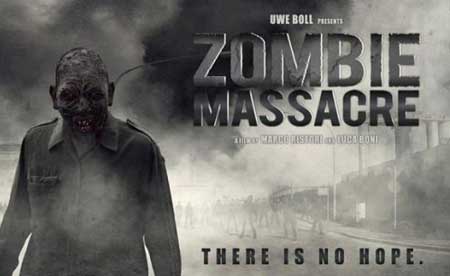 A double-cross is uncovered (of course), and our heroes must face the “Ultimate Creature” (their credit, not mine) in a final showdown that manages to belatedly eke a little excitement out of the tawdry affair.  Despite the overall awfulness “Z” wears on it’s bloodied sleeve, it does have a few positives to its credit.  The direction of Luca Boni and Marco Ristori (who both also penned the script) is sure-footed and keeps the film moving at a decent pace, and as I’d previously mentioned, the make-up and visual effects vary from capable to nearly outstanding in places.  There’s an outside possibility you may even find yourself enjoying “Apocalypse Z” should you take the gamble of a viewing.  After all friends, this is as close to singing the praises of a Uwe Boll production as yours truly may ever reach.  In fact, I’d bet money on it.