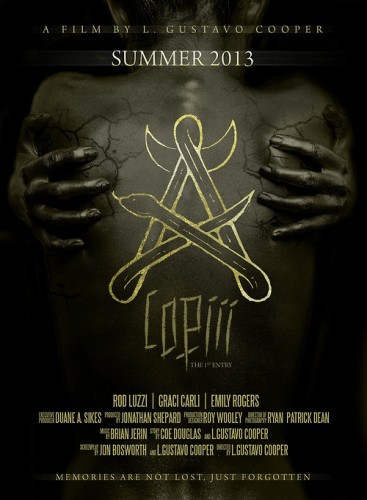 Jacksonville, FL – May 1, 2013 – Executive Producer, Duane A. Sikes, has once again teamed up with Director, L. Gustavo Cooper and Producer, Jonathan Shepard to produce the highly anticipated follow up to their award-winning short film, Velvet Road. Over the last 18 months Velvet Road has appeared in over 30 film festivals around the world, garnering awards in more the 17 of the festivals. Much like Velvet Road which blended the Zombie genre with the very real tragedies of historical & present day racism, Copiii: The 1st Entry blends the realities of psychological damage with the paranormal to blur the line between reality and the imagination.

Production has wrapped and post production already begun on Copiii: The 1st Entry, the first feature-length film by the Producer/Director team of the award-winning short film Velvet Road. Velvet Road has played more than two dozen film festivals all over the world in 2012 and won Best Picture, Best Short Film, Best Cinematography, and scores of rave reviews and other awards. Now Director L. Gustavo Cooper will begin principle photography on his first feature film Copiii: The 1st Entry in February.

Filmed entirely on location in Northeast Florida, the micro-budget feature completed principal photography in 15 days, wrapping on March 4, 2013. Now in post production, it is slated for completion on June 30, 2013. In addition to the producing team, much of the same technical team from Velvet Road has returned to Copiii, pooling the resources of seasoned industry professionals to surpass the financial limitations of the film’s budget. Roy Wooley (Face Off – SyFy) provided Production Design and special effects make-up. Award winning sound designer, Andrew Avitabile (SyFy) also returned to the team, bringing his keen sense of timing and “ground up” construction of the film’s sound design. He team’s with Velvet Road composer, Brian Jerin on the original score for the film. And the soundtrack includes local acts, The Black Kids (Columbia), Evergreen Terrace (Metal Blade Records), Swimm (formerly B.L.O.R.R) and others.

Copiii: The 1st Entry is the story of two newlyweds, Trevor and Holly Davidson, driving through Florida on the way to their honeymoon in the Keys. At a simple tourist stop in the psychic capital of the world, they encounter Vjestica Patkavior, the scion of the ancient curse known as Copiii Pierdere, roughly translated as “loss child.” Holly Davidson walks into Vjestica’s home for a tarot reading, only to be informed that she’s pregnant, and her unborn child’s lives are now in danger. Trevor and Holly return to their new home in North Florida and begin preparing the house for the coming child, but something is amiss with Holly. What Trevor and his parents dismiss as hormones, Trevor’s younger sister, Marissa, sees as something more. Determined to understand Holly’s aggressive and violent tendencies, Marissa learns about Holly’s dark past and the curse of copiii pierdere. Convinced that Holly is the victim of spiritual forces,

Marissa tries to convince Trevor to make amends with Vjestica Patkavior. Left with no other alternatives, Trevor and Marissa embark on an adventure they don’t understand to save Holly and their unborn child. But will their ignorant actions only invite further tragedy into their lives or will Holly recover, give birth, and enjoy their happy new life together as a family?