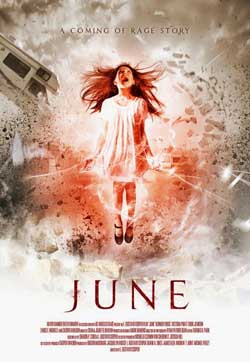 A couple gets more than they bargained for when they decide to take in a little girl named June. You see, her body just happens to inhabit a powerful entity, and unfortunately it isn’t a very friendly one as people seem to die wherever June happens to go.

If you ask me it’s been a while since I’ve seen a good creepy little kid movie. Don’t get me wrong, there have been several of them to come along in recent years but most of them have been pretty lackluster for the most part and failed to deliver for a number of reasons. As a result I went into June expecting more of the same and didn’t really think that it was going to be anything special. While it wasn’t the greatest movie I’ve ever seen I still thought that it wasn’t that bad and that it succeeded in many areas where a lot of other movies similar to it failed. Even though it was sorely lacking in the area of originality I still enjoyed it and thought that it worked for the most part. I didn’t find it to be particularly scary by any stretch of the imagination but at the same time there was just something about it that I liked. Out of all the movies I’ve seen in recent years that featured some sort of evil and/or demonic kid I can honestly say that June has probably been the best of its kind.

Combining elements of The Omen, Carrie, and several other films June may seem a little cookie cutter but I really didn’t mind. I genuinely enjoyed the film and thought that it had a pretty interesting premise despite the fact that it wasn’t very original. One of the things that worked is the fact that June herself isn’t exactly evil. She doesn’t like the fact that she has an evil spirit lurking inside of her and she does her best to keep it under control so that she doesn’t hurt those around her that she loves. I thought that it was a nice idea that she is basically in a constant battle to keep the entity (which she calls “Air”) at bay and deep down she is your typical sweet little girl who just wants to be loved and live a normal life. Unfortunately Air has other ideas and when it does take over (which is usually when June is feeling upset, angry, or just emotional in general) all hell breaks loose (the scene where she loses total control at the trailer park toward the beginning of the movie is quite awesome if you ask me). While June does hurt people from time-to-time due to her predicament it isn’t really her fault as she isn’t really an evil little girl at heart that intentionally sets out to cause death and destruction, and I thought that this was a nice touch. I like the whole struggle to control the entity that she has to go through during the course of the film and I think that viewers will too.

I also really dug the cast as well. I have always been a huge fan of Casper Van Dien and don’t think the guy gets the respect that he deserves. I personally think that he is awesome and he does an excellent job this time around in the role of Dave. Dave is just your typical nice guy character who makes the mistake of taking June into his home. He loves June but at one point he starts to have second thoughts about having her around due to all the terrible things that start to happen once he takes her in and I thought that this was a realistic response. I know I sure as hell wouldn’t want her around after seeing some of the things she’s capable of and don’t blame Dave for wanting her out of his home one bit. Victoria Pratt is also very good as his wife Lily and is probably the most sympathetic character from the film aside from June herself. Like Dave she is a good person who only wants the best for June but at the same time she is a little scared of her due to some of the things that she does. I genuinely felt sorry for her and couldn’t help but root for her. Of course Kennedy Brice does a bang up job as the title character and pretty much nails the role. She is creep as hell at times while sweet and innocent at others and like with Lily I couldn’t help but feel bad for her (the scene where she is in the classroom and has a Carrie-like moment is depressing and a little hard to watch). All in all every one of the actors in this film did a great job and none of them turned in a bad performance whatsoever.

My only real gripe with the film is the ending. It is so rushed it isn’t even funny and just sort of runs out of steam. I was expecting something really huge and amazing to happen at the end but sadly it didn’t turn out that way. Something sort of big happens at the end and then it just fizzles out and comes to a screeching halt (I’m still not sure if one of the important characters is dead at the end or not as the film just pretty much forgets about him during the conclusion). I wasn’t real big on the final scene either as it just doesn’t work. I don’t want to give anything away but it reminded me a lot of the last scene of the 2002 remake of Carrie). I know that it was done this way to leave the door open to a possible sequel but I just wasn’t that big on it and think that something else should have happened to end the movie as nothing is really resolved for the most part.

Despite the fact that it wasn’t perfect I still really dug June. I think that it has a lot of heart and is just an interesting film in general. There is a lot to like about it (including the cast and the nice little twist that is thrown in involving one of the characters toward the end) and I think that if viewers would give it a chance they would agree with me. Check it out when you can, and believe me when I say that you could do a whole lot worse.