Gonna be one hell of a haunt season. A bevy of “must own” discs are heading our way and here’s another one to add to that list. The HAMMER classic DRACULA: PRINCE OF DARKNESS.

Originally release in 1966 and starring Christopher Lee, Barbara Shelley, and Andrew Keir the Blu-ray will be hitting shelves here on Sept. 3rd.

Synopsis:
For many years after becoming one of the definitive movie Draculas in the 1958 Hammer Films classic Horror of Dracula (in which he was pitted against Peter Cushing as Dr. Van Helsing), Christopher Lee refused to reprise his role as filmdom’s most infamous vampire. He finally returned to the role in this belated sequel, once again directed by Hammer studios veteran Terence Fisher. It’s not as effective or as intelligently written as the earlier film, but it has become a minor classic in its own right for horror connoisseurs, notably due to the combination of eerie atmosphere (a Terence Fisher specialty) and violence that was, by mid-’60s standards, quite bloody and graphic. Indeed, the story begins when Count Dracula’s servant revives his master by hanging an unsuspecting victim over the tomb containing Dracula’s ashes and draining the blood from the unlucky fellow so it can trickle into the tomb and restore life to the remains of the undead vampire! It’s this kind of unholy communion that was a trademark of Hammer horror, and Dracula: Prince of Darkness continues with all the requisite ingredients–including a group of tourists who arrive at the count’s secluded castle just in time to feed his insatiable bloodlust! True horror fans will appreciate the performance by Hammer regular Barbara Shelley, widely considered to be one of her best. So, file your fangs and enjoy Lee in his most famous and immortal role. 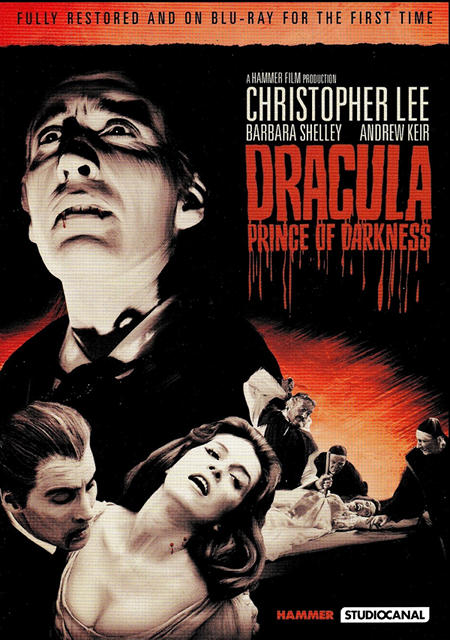