HorrorNews.net is happy to announce the new True Blood®:The Complete Fifth Season
and we have FREE Blu-ray copies.

Please email joyhorror@horrornews.net and put True Blood in the subject line.  Next, you put your full name and complete address in the body of the email.   We will be picking winners at random.  United States and Canada ONLY. 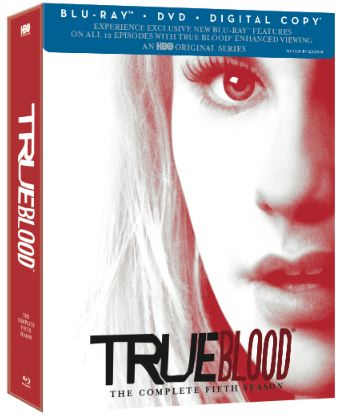 New York, N.Y., March 13, 2013 – A vampire civil war is brewing, Sookie’s best friend is dead and an old vampire foe has returned to wreak havoc on the human race. True Blood continues to be one of television’s most popular series and the wildly entertaining fifth season will be available on Blu-ray with DVD and Digital Copy (Blu-ray with HBO Select* $79.98), DVD ($59.99) and Digital Download on May 21, 2013. Both sets include the full 12-episode season, along with extensive bonus materials including exclusive interviews and never-before-seen content.

Called “fangtastic” (US Weekly) and “cheeky…great fun” (Variety.com), True Blood: The Complete Fifth Season finds Sookie triumphant over her climactic encounter with Marnie. However, her showdown with Debbie may have had fatal consequences for Tara. Meanwhile, the denizens of Bon Temps are approaching a new crisis with Russell Edgington, Bill and Eric are in deep with the Authority and new threats from unexpected sources loom.

True Blood Episode Six: Autopsy – Join the cast and crew as they dissect the major events of episode six and provide an in-depth, behind-the-scenes look at how True Blood is made.
Authority Confessionals – Learn more about the mysterious institution known as The Authority, from Nora, Kibwe, Rosalyn, Salome, Steve and Russell.
Enhanced Viewing:
Character Bios, Vampire Histories and Hints/FYIs: Get even more background on favorite characters, trivia facts as well as show hints and clues.
Flashback/Flash Forward: Move through time in the world of Bon Temps. Flashback to relive pivotal moments or Flash Forward to reveal the significance of a certain scene.
True Blood Lines – Uncover secrets from relationships past and present in this engaging, fully interactive “re-Vamped” guide and archive.

Inside the Episodes – Get the back stories on each episode with revealing interviews from the show writers.
Audio Commentaries – five commentaries with cast and crew including creator/executive producer Alan Ball, Anna Paquin, Stephen Moyer, Denis O’Hare, Carrie Preston and many more!
Previews & Recaps

*Blu-ray with HBO Select offers buyers the choice of three ways to watch in one set – Blu-ray, DVD and Digital Copy – and at no additional cost. The digital copy is redeemable via a provider of your choice: iTunes, Vudu or Amazon, as well as an UltraViolet copy through supporting providers.

About HBO Home Entertainment®
HBO Home Entertainment markets an extensive array of programs ranging from the critically-acclaimed and groundbreaking series including the international phenomenal hits Game of Thrones and True Blood, favorites such as The Sopranos, Sex in the City and Entourage along with multiple Emmy Award-winning mini-series The Pacific and Band of Brothers. The company’s catalog contains hundreds of titles including the Peabody Award-winning children’s program Classical Baby, provocative programs from HBO Documentary Films including When the Levees Broke, innovative movies from HBO Films including Game Change and Temple Grandin, and comedy specials featuring stand-up performers like Chris Rock and Ricky Gervais. The division distributes programs to the home entertainment market in three formats: Blu-ray, DVD, and digital download. Launched in 1984, HBO Home Entertainment has offices in New York, London and Toronto and the company’s releases are marketed in over 70 countries around the world.