Land of Shadow and Substance: The Fever

With an intense soundtrack closely similar to the classic Man With the Golden Arm, another addiction tale, abet a drug version starring Frank Sinatra, the premise remains consistent and is fully conveyed, the only exception being this time it is gambling.

At the time, with gambling machines stringently illegal in California, finding a slot machine to use as the antagonist proved hard to come by. However, after obtaining an impounded one from the police department, the production resumed, but only with the stipulation that an armed police officer guard and ensure that the machine wasn’t inadvertently taken to some back room for debauchery. 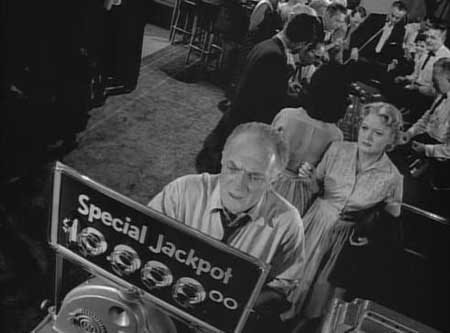 Another aspect needing to be overcome for the episode to be a success was to have a believable speaking sound effect that was distinguishable, as well as impersonate a slot machine’s tumbling coins. To create this effect, after recording change flowing down a metal trough (quarters and dimes only with nickels being avoided due to their dull lead-filled sound), the recording was then piped through speakers that were attached to a person’s throat. When the person opened their mouth, the tinkling sound came through and the person, using no vocal chords, needed only mouth and simply mimic as if they were speaking in order to form and create the one single needed word…Franklin.

Stacking chips, rolling dice, spinning fruit laden tumblers and flashing lights, the setting is Las Vegas and Kansas natives Franklin and Flora Gibbs ( Everett Sloane and Vivi Janiss) are there by virtue of her winning a sweepstakes.

As they stroll around the room, watching roulette wheels spin and many pulling handles, it’s obvious that they are out of their league. Franklin, as miserly as they come, preaches to Flora about the harmful vice of gambling. He is not what you would consider happy with their all-expense paid trip and only because it’s free does he try to be positive and make the best of it. 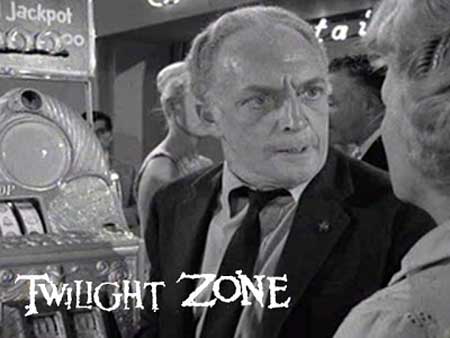 Flora, in awe of the controlled chaos of inserting coins and pulling handles, with some obvious hesitance decides to try a coin herself and retrieves one from her purse. Cautious, she slips it into the feeder slot and pulls the handle. She loses, but no harm no foul, she is content, and maybe even relieved, to have lost only a coin.

Franklin appears, informing that he intends to go back to the room and shave before dinner. Along the way a drunk (Art Lewis), with his wife beckoning, stops him to offer a dollar coin for play in the machine he had been playing. Franklin tries to decline, but before the man insists, forcing the coin into Franklin’s hand and guiding it to drop in the feeder slot before walking away. Stunned and conflicted, Franklin carefully looks over the machine before finally pulling the handle…and winning twenty or so coins.

Flora appears and comments how lucky Franklin must be. Although, after another lecture about how immoral gambling is, he remains tight-fisted, puts the coins into his pocket and the two walk away. Within a few steps, Franklin hears the metallic sound of his name being called out and stops to listen. When it doesn’t repeat, the two continue off to their room.

That night, while lying in bed, again Franklin hears the jingling voice calling out to him. Rising from the bed, he goes to the stack of coins having had placed on a dresser near the window and looks deeply at them. Obviously, the bug is biting. 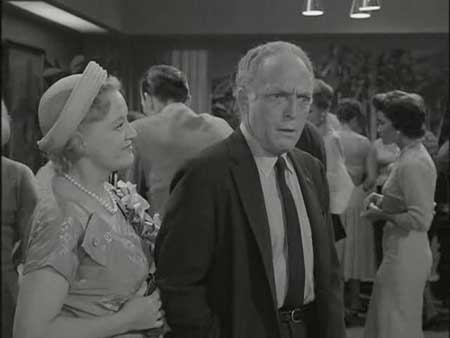 When Flora arouses and notices, she inquires whether anything is wrong. Franklin rationalizes and tells her that the money won is tainted and needs to be returned and he intends to do it. She finds his justification amusing, but nonetheless, returns to sleep as he heads out the door.

The following morning, Flora finds him still inserting coin and pulling the handle. Full of concern, making mention that it is eight o’clock in the morning, she is only rejected. The fever having fully grasped, Franklin doesn’t care.

Through a haze of cashier window check cashing, handle pulling, wheels spinning and coins falling, hours go by and Franklin is not winning. On occasion Flora makes a supplicating appearance, but his aggression towards her continues.

Eventually, Franklin, having gone broke is wishfully holding up his last coin. He drops it in and clutches and tugs the handle. The handle won’t budge as the machine appears to have broken. Franklin cracks and starts yanking and hitting the machine, crying out that it took his last dollar. He pushes the machine over and begins beating on it. With a tearful and frightened Flora looking on, she calls for help and two casino men come to her aid to drag a babbling Franklin back to their room.

That night, a delusional Franklin again hears the call of his name. Through hallucinatory visions, the slot machine emerges at the room’s doorway. Flora, oblivious to Franklin’s visions, cries out, asking what is wrong. He appears to regain composure for a moment and realizes that the door is actually closed.

But, the sanity doesn’t last for long and the hallucination is back as the door swings open and the slot machine begins to pursue.

Franklin, continually backing up away from the fantastical apparition and with an panicky Flora unaware of his loss of reality, she watches as he continues on until falling through the window to his death on the concrete sidewalk below.

With a crowd of people dispersing from around Franklin’s lifeless body, the slot machine stands in the shadowy midst. A single coin rolls toward Franklin’s open palm, falling to its side mere inches away.

Next time – The Last Flight

Land of Shadow and Substance: The Fever