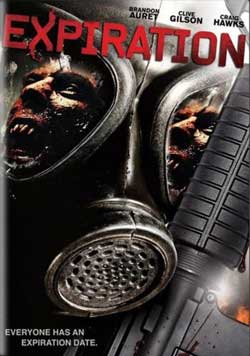 Four participants sign up for a mysterious medical test.

Desperate times call for desperate measures. Cliche statement, that might be, but, its all too true, sadly. In an oftentimes rocky economic world, people can be driven to extremes in a bid for survival. Some take grueling shifts at burger joints, some do dirty deeds for dirt cheap, and some, like the four people we meet in “Expiration” offer themselves up as human guinea pigs for experimental medication. 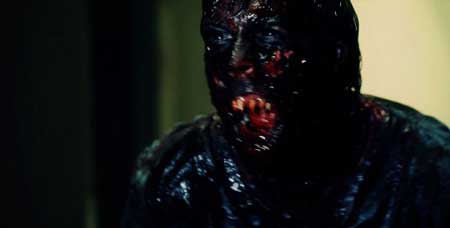 Not the safest method to earn a few greenbacks, but, it all seems straightforward enough, in the beginning. Fill a few forms, take a sedative, and a swift trip to dreamland follows. The participants are understandably anxious, but dive headlong into their sojourn courtesy of Big Pharma.

When they awaken, however, things are more than a bit off. Confused, and groggy as hell, the test subjects are not only surprised to realize they’ve been out for two months, but, they also have undergone some strange, and in some cases, serious physical transformations, ranging from removed tattoos and piercings to one paraplegic test subject now being able to walk.

Obviously realizing that they are getting far more than they signed up for, all they can do is wait in what appears to be an abandoned hospital of some sort that is filled with surveillance cameras and crawling with armed, gas mask sporting guards. 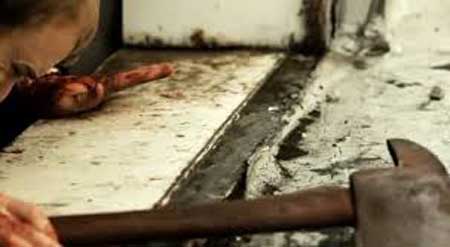 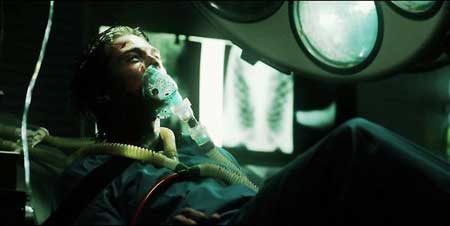 The four human lab rats aren’t the only ones feeling freaked out and f*cked up. When guards begin to get attacked by rogue individuals (former test subjects?) the experiment begins to spin out of control.

A palpable sense of dread covers the production.The audience knows from the jump that the journey taken by the participants is going to be a rocky one, but excellent, compelling establishment of tone keeps us watching the proverbial noose tighten around the necks of these seemingly doomed individuals. The production, sharp as the edge of a newly unwrapped scalpel blade, and all around solid performances keeps the film afloat.

The claustrophobic, POV shots of human decay, coupled with the morally anemic surveillance footage of oncoming sickness observed by the faceless corporation that is causing torment for the poor unsuspecting bastards, makes for some interesting body horror.

However, this can only be said for the first half of the production. 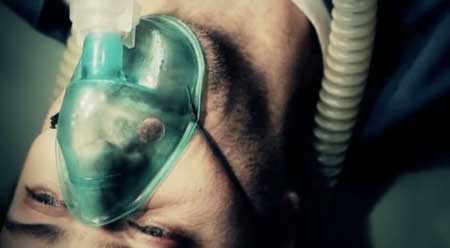 About the midway point is when things begin to go dizzyingly, disappointingly, off the rails. A great deal of “huh?” bombards the production as the script decides to abandon originality and instead cherry picks all across the horror genre. Zombies, video game style fights, even a bit of completely pointless torture P*rn (isn’t that an oxymoron by now? one can hope) is thrown in for good measure. Even the soundtrack sounds recycled at this point, like a 14 year old interpreting tomandandy’s better works.

It’s a bit of a neat trick really, an anti cinematic magic show, how quickly things dissolve. One second, things are going in a promising direction, then it swiftly becomes a “Resident Evil” knockoff. Even the cast, starting out nuanced and charismatic, becomes totally crappy, either over emoting to beat the band, or forgetting how to act entirely and resorting to stumbling around, mouths agape, fake trembling every once in awhile to at least appear to still be on board. 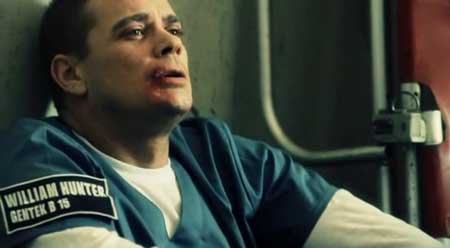 Ironically, the film serves as a bit of an experiment in and of itself. The results tell us this: if you have something to say with your film, say it boldly, proudly, and believe in the story you are telling, and we, the audience, will believe in it as well. If you start to stumble, mumble, stammer , fall and lose faith, we’ll lose faith as well.

It’s as if the entire film realizes it’s good at 50 minutes in, and that people are watching it, and gets gun shy from the pressure and starts frantically, self consciously yanking out every stop, every gimmick it can muster in a bid to be even further liked.

Don’t you know, little horror movie, you don’t need to do that? Don’t go changin’, to try to please me…I liked you just the way you are…er, were, that is.