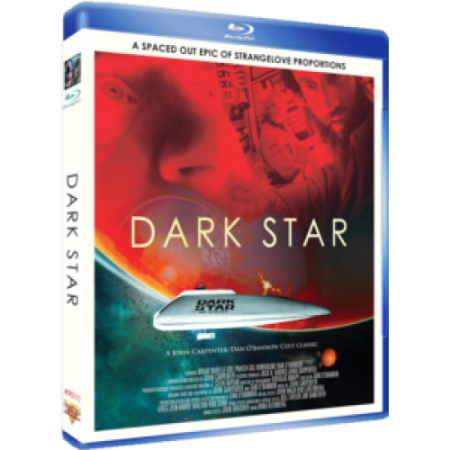 “The crew of the Dark Star are on a twenty year mission to clear a path in space by destroying planets that are in the way of navigation routes. As their mission nears completion, they must cope with a runaway alien which resembles a beach-ball, faulty computer systems, and a ‘smart bomb’ who thinks it is God. The late commander Powell is stored in deep freeze, where he is still able to offer advice. Even the dead captain is of little help in arguing with Bomb who is bound to do his duty.” (courtesy IMDB)

John Carpenter was one of the new generation of young directors to come out of the same film school – the University of Southern California School of Cinematic Arts. Though his first feature Dark Star (1974) was well received at film festivals, it was years before it gained any sort of wide distribution, and he did not become generally known to the film-going public until the release of Halloween (1978). Dark Star was originally a 45-minute short film shot on 16mm for around US$6,000. It was the brainchild of Carpenter, who started pre-production in 1970 and shortly afterward interested Dan O’Bannon in joining the project. For the next three years they spent all their spare time working on the film, financing it out of their own pockets.

They were influenced by 2001: A Space Odyssey (1968) for the interior design of the ship and many of the exterior shots, although O’Bannon always insisted that the talking bomb, one of the story’s most interesting devices, was not based on HAL 9000 but on an old idea of his own. Jack H. Harris, producer of low-budget genre films such as The Blob (1958), The 4-D Man (1959), Dinosaurus! (1960), Equinox (1970) and Schlock The Banana Monster (1973), provided the necessary money to enable extra footage to be shot by O’Bannon and to transfer the whole film onto 35mm, bringing the total budget to US$60,000. Even so, distribution remained very limited for years, but the success of Star Wars IV A New Hope (1977) gave Dark Star a new lease on life and has a strong cult following, especially among undergraduates.

It’s an amazingly good film for only US$60,000, better than films that have cost literally a thousand times as much. Unlike so much science fiction on the screen during the seventies, it is obviously made by people who love and understand the genre. The plot defies simple synopsis, but its realisation is achieved with wit, precision and painstaking special effects that look pretty damn good despite the shoestring budget. The result is a splendidly inventive, hip, irreverent space satire that provocatively illustrates how astronauts, when confined to their spaceship for too long, become irretrievably ‘spaced-out’. This dehumanisation theme is much better realised here than in John Carpenter’s version of The Thing (1982). In fact, seeing these astronauts in their sorry state at the film’s beginning, we are concerned not about what will become of them, but about how they became that way.

The Dark Star of the title is a spaceship (miniatures built by Ron Cobb and Greg Jein) in which four astronauts roam the universe on a boring and apparently endless mission. Neglected or, more likely, forgotten by earth base, their captain dead, their ship radioactive, their toilet paper long gone, their minds wandering in various directions as they fly through infinite space on a now-pointless mission to locate unstable worlds and destroy them with thermostellar bombs. Conditions on the ship have deteriorated – the computer is having difficulty maintaining the life-support system, the crew members are in various stages of psychosis, the captain is dead but still partially conscious in one of the ship’s freezers, and the ship’s mascot – a rather nasty alien shaped like an inflatable beach ball with Creature From The Black Lagoon (1954) claws – is getting increasingly belligerent.

But the most urgent problem involves one of the thermostellar ‘smart’ bombs which has to be continually talked out of exploding prematurely. The apocalyptic ending in which the bomb decides, “Let there be light,” leaves surf-loving Lieutenant Doolittle (Brian Narelle) blissfully riding a board through space and burning up in a planetary atmosphere while another, an autistic stargazing mystic named Talby (Dre Pahich), meets his ecstatic end in a passing asteroid shower. The co-writer, editor, effects artist and star was Dan O’Bannon, who would later write Alien (1979), Dead And Buried (1981), Blue Thunder (1983), The Return Of The Living Dead (1985), Lifeforce (1985), Invaders From Mars (1986), Total Recall (1990), and Screamers (1995). One of the highlights is a long sequence in which the witless Sergeant Pinback (Dan O’Bannon) tries to feed the alien they’ve taken on board. Although the scene is pure comedy, you’ll recognise this sequence as the genesis of Alien (1979).

The film has traces of amateurishness, yes, but it’s brimming with ingenuity and quirky quotable humour. How they spend their time is the gist of the film – mostly they just irritate each other and polite conversation is a thing of the past. They groove to an eclectic selection of music, from hard rock to country to dreadful string muzak, played by their sexy-voiced female computer. They send disgruntled messages back to earth, contemplate the universe, play makeshift musical instruments and, every so often, avoid catastrophes. It’s ironic how everything in space takes forever, yet when a crisis hits, the panicky men have only a few seconds in which to save themselves. It’s with this irony in mind I’ll quickly ask you to please join me again next week when I shall discuss another dubious classic for Horror News. Until then, good night and remember, as my old friend Bela Lugosi would say, “Bevare! Bevare of the big, green dragon that sits on your doorstep – and the gifts it leaves on your lawn.” Toodles!