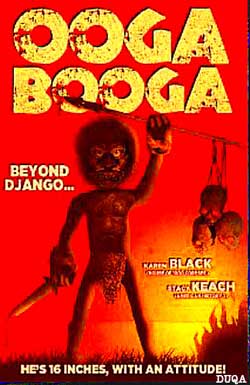 Ooga Booga follows an innocent African American boy who is brutally murdered by dirty cops, but his soul is magically transferred into an action figure named Ooga Booga. With on his tribal spear and old girlfriend to help he takes to the streets and trailer parks to find the men that ended his once bright future.

I’ve always admired the vast and spotty career of Charles Band.  He and the production company he founded in 1989, Full Moon Features (or any of the several similar monikers it’s gone by over the years) are proof positive that so many independent horror film makers never seem to grow up.  Like gleefully insane, fake viscera-spraying Peter Pans, they give you exactly what you’re expecting of them.  Full Moon classics such as “Castle Freak”, “Head of the Family” (I could go on for days here) and the one that kick-started everything, “Puppet Master”, are comfort food for the brain. 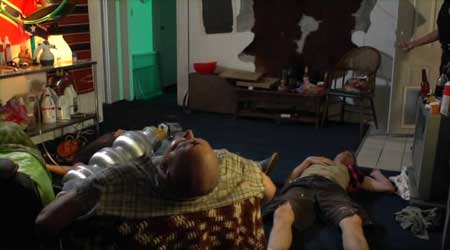 Ever since the guiltiest of pleasures, “Gingerdead Man,” I’ve learned one thing about Mr. Band.  He’s never met a murderous animated object (toys, cookies, bongs) that he didn’t like.  Our latest offering is no exception, though I was immediately a bit aghast by the title.  Certainly, I wasn’t expecting political correctness, but neither did I wish to harbor the shame brought on by laughing at Robert Downey Jr. in “Tropic Thunder,” or every second of Spike Lee’s “Bamboozled.”  The title doll is a crass invention of Hambo (Chance A. Rearden, reprising the role from “Zombies Vs. Strippers”), a low-rent children’s show star whom we meet at the onset, drunk and masturbating in his dressing room when he’s supposed to be onstage for his live telecast.  He makes a lecherous ass of himself on-air, and is promptly fired by his director.  Cut from the same ilk as dysfunctional clowns Shakes and Krusty but bearing a pig nose where the red ball should be, Rearden eventually brings a shred of humanity to the role, no small feat after such an abrasive first impression.

Hambo calls his only apparent friend on the planet, Devin (newcomer Wade F. Wilson), an aspiring doctor who remained a fan into adulthood.  Hambo then brandishes the dolls he’s created and is certain will earn him millions overseas, which bear more than passing resemblences to larger versions of the questionable Homies line of figurines.  All of the wince-worthy stereotypes are accounted for: the redneck, the crack whore, the Asian, you get the gist.  His gift to Devin for always being there is his favorite of the lot, a two-foot tribal doll complete with spear, bone through the nose and half-torched joint protruding from his lips named Ooga Booga, who first appeared in “Doll Graveyard.”  This amiably racist (probably won’t find myself typing that phrase often) gesture warmed me up a bit to the title and movie overall.  Perhaps I would escape the screening without despising myself for being white. 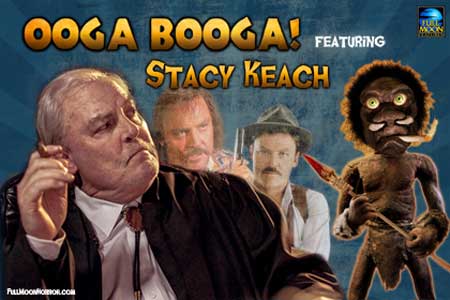 This sensation of relief didn’t last long.  After witnessing three thugs who become much more pivotal to the plot than I would have liked rob the store he’s in and shoot the clerk, Devin is then executed by the corrupt Officer White (Gregory Niebel), who naturally assumes the clean-cut black kid perpetrated the crime.  Compliments of a malfunctioning Frozen Slurshy machine and a little errant electricity (Is there anything that stuff can’t do in genre flicks?), Devin’s soul is transferred to the doll, whose name I am clearly avoiding even though I remain forgiving.  For the name only, friends, because there are far more ghastly atrocities committed by “Ooga Booga” to leave one bitter.

With the aid of his girlfriend Donna (Ciarra Carter, giving a better performance than the enterprise deserves), our pint-sized avenger hunts down those who wronged him and ruthlessly slaughters them, spearing his way up the nefarious cracker food chain until facing off against Judge Marks, portrayed with scenery-chomping joy by Stacy Keach.  The trail of carnage left by our latex poor man’s Crow should be a lot of fun to behold, shouldn’t it? 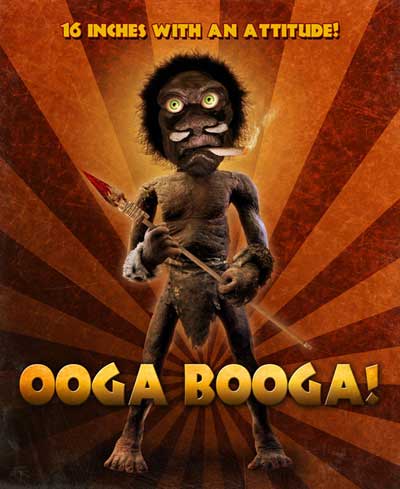 The Ooga Booga puppet itself is a nifty bargain effect, and manages to be somewhat expressive, though it’s perpetual look of surprise never changes save for the eyes glowing red when it kills.  Apart from that technical factor, there isn’t much else to elicit fondness here.  In fact, this is an example of the worst Full Moon trash, and that’s including the ridiculous “Trancers” sequels.  Instead of the goofy revenge flick promised by the set-up, we are forced to muddle through an hour of exposition involving the inner workings of the crime syndicate, and unnecessary supporting characters (I’m looking in your general direction, Karen Black) who exist solely to bog the pace with unfunny comedy shtick.  Or in Black’s case, to be an obvious inside joke not once (She was pursued by another pissed-off African figure in 1975’s “Trilogy of Terror”), but twice.  Her character, Mrs. Allardyce, bears the same name as the unseen mother in “Burnt Offerings,” which she also starred in.  At the very least, this role serves as a double reminder that she used to be in quality once upon a time. 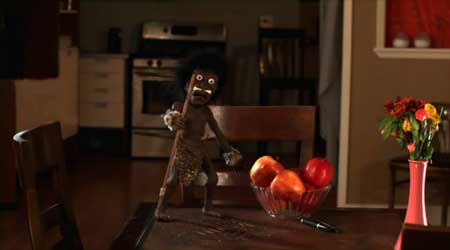 The three store bandits, Skeez, Zero and Boner, also cook crystal meth and run a prostitution ring out of their trailer for the Judge, as well as raping Donna in an ugly and extraneous scene.  In fact, the adjective “extraneous” describes such a large chunk of the 85 minute run time, I have literally been reviewing filler for the brunt of this link already.  When the fatal lessons of equality (our clunky moral message) are finally dealt to the bad guys, they are mundane and virtually bloodless.  The only true payoff for the audience is the arrival of the closing credits.

I’m a huge fan of watching hateful racists brutally murdered by supernatural forces, but “Ooga Booga” (still don’t like typing that) is no “Tales from the Hood.”  It isn’t even the tragic Vic Morrow episode from “Twilight Zone: The Movie.”  It’s the typical Full Moon/ Band lackadaisical effort, therefore to be avoided at all costs.  Despite my new found crush on the radiant Carter, I wash my hands of the entire debacle.  More specifically, I think I need a shower.