Land of Shadow and Substance: The Hitch-Hiker

The only radio play ever to be transformed into a Twilight Zone episode, the Hitchhiker saga is rather Twilight Zonish in itself.

Originally entitled Sorry, Wrong Number and broadcast on The Mercury Theatre on the Air, author Lucille Fletcher came up with the idea during a trip from the east coast to the west coast, after seeing the same man on two separate occasions at two different places. While her original character was a man, coincidently portrayed by Orson Wells, when Serling bought the rights, he changed the primary character to a woman and named her Nan, a family shortened version of Anne, his daughter. And, it always bothered him why he chose that name.

In the episode there is a scene when a train is barreling down on the woman, whose car has suddenly stopped midway across the set of tracks. Director Alvin Ganzer, known for creative and suspenseful camera work, wanted to film the train coming directly at the camera. However, unable to afford the renting of a train for the shot, he decided to use an actual train during an authentic route. But, this could be dangerous. Regardless, it was a peril he was willing to attempt…until viewing an opposite traveling train and realizing just how fast it was essentially going. Assuming that the train he intended to film would be moving at the same speed, a correct assumption, second thought dictated that the camera be set up alongside the tracks instead of directly on the tracks. This eventually proved to be a rather effective shot.

One last tidbit: this was the second time that the Twilight Zone personified Death, the first being One For the Angels, this time depicting him as a calm and relatively unthreatening shabby suit wearing middle aged man. And, it was Ganzer’s quick, unexpected and up close shots of him that the tension derived from. 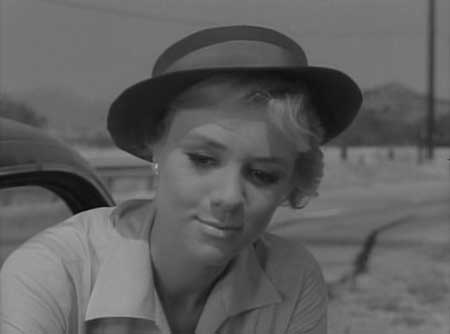 While traveling from New York to California on a well-deserved vacation, Manhattan department store merchandise buyer Nan Adams (Inger Stevens) has a tire blowout on a country two lane Pennsylvania road. After being assisted by a local mechanic (Lew Gallo), in which he makes mention of the black skid marks she had left and how lucky she was to not have had an accident, he offers for her to follow him back to the garage to obtain a new tire. Before pulling away, she notices a hitchhiker (Leonard Strong), a tranquil and composed appearing man, looking back at her, his thumb requesting a ride.

At the garage, while paying for the repairs, she again sees this hitchhiker, in the mirror of her cosmetic case and it is when she begins to grow noticeably worried and the tension of the episode starts to grow.

With her journey continuing across various highways, so does her narration concerning the odd hitchhiker, referring to him as a skinny little scarecrow of a man, after seeing him at various places along the way, and of the vagueness of it all,.

She stops at a diner and inquires whether the area is prone to many hitchhikers. The counterman (Russ Bender) finds it to be a funny sort of question since the turnpike is a ways off and typically a hitchhiker would have trouble getting a ride with the local sparse traffic. But yet, that hitchhiker was there.

At a construction site in which the road is temporarily closed, she stops for the flagman (Dwight Townsend) and again sees the hitchhiker. In a panic state she takes off on a dirt side road, attempting to get away. 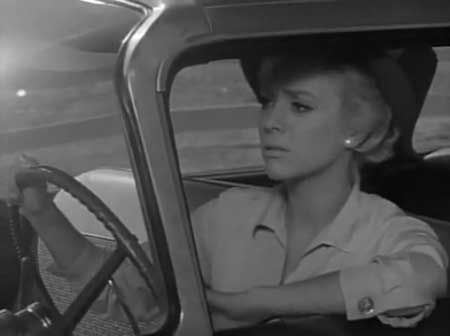 Some time passes and once again on her way, she comes to a set of railroad tracks. The train appears far off and she decides to cross, assuming there is plenty of time to make it safely. However, the car shuts off while straddling the tracks and she again sees the hitchhiking man, his thumb typically pointed, waiting at the opposite side of the tracks. As the train barrels down, she manages to start the car and slap the shifter into reverse, narrowly avoiding catastrophe.

Fast forward ahead a few days and her narration continues, describing the endless roads, hills and towns; of stopping only for food before moving on in her flight to get away from the hitchhiker, which she has seen many times along the way.

In Arizona she runs out of gas just before midnight and takes off on foot to a gas station not far ahead. But, the station is closed. She beats on the door, awaking the somewhat grouchy proprietor. Unfeeling and insensitive to her plight, he tells her to come back in the morning.

Suddenly, a hand reaches out and touches her shoulder. She whirls around to see that it is a Navy man (Adam Williams) on his way back to his San Diego based ship. Offering him a ride, she appears relieved when he accepts and before long, gas is obtained and the two are on their way.

Bantering along the way, the subject always being hitchhiking in general, things appear to have settled and calmed. But, when the hitchhiker again appears, Nan is at her wits end and swerves in an attempt to run him down. The sailor grabs the wheel and presses a foot on the brake, forcing the car to a stop. With Nan fully alarmed and the sailor mentioning that he hadn’t seen anyone, he assumes that she is simply tired and offers to drive the rest of the way. But Nan disagrees and he decides to get out. Nan pleads and begs for him to stay and not leave her alone, but he leaves anyway.

Trying to find or regain some sort of sense of it all, she thinks that a familiar voice may help and finds a payphone to call her mother back in New York. Although, instead of her mother answering the other end, family friend, Mrs. Whitney (Eleanor Audley), answers instead, surprising her. Nan demands to speak to her mother and is informed that her mother is resting after having suffered a nervous breakdown six days prior when her daughter Nan was killed in an accident; an accident that occurred after a tire had blown out and the car had rolled over on a Pennsylvania country road.

Nan drops the phone receiver and a strange numbing calm overcomes her. The fear had fled and she gets back into the car. Adjusting the rear view mirror, she sees the hitchhiker sitting in the backseat. He replies with, “I believe you are going my way.”

Next time – The Fever

Land of Shadow and Substance: The Hitch-Hiker