The red band trailer for HATCHET III showed up today and it’s looking good. I’ve always been a little cold towards the first two HATCHET films, I mean, they’re OK but never really got me fired up but this trailer for number three, well they’ve got my interest.

A press release accompanied the trailer, here are the highlights:

HATCHET III is set to open in New York City’s Cinema Village and in Los Angeles at Laemmle Music Hall on June 14th. New cities have just been added – fans in Denver and Columbus will also be able to catch the film in theaters on June 14th. The film will also premiere on VOD and digital download on the same date. Opening week will feature special appearances by cast and crew, followed by Q&A’s at each location.

Danielle Harris and Kane Hodder return in HATCHET III and are joined by Zach Galligan (Gremlins), Derek Mears (Friday the 13th 2009), Caroline Williams (Texas Chainsaw Massacre 2), Sean Whalen (The People Under the Stairs) and others.
HATCHET III continues the tale of the now-iconic villain Victor Crowley (Kane Hodder). As a search and recovery team heads into the haunted swamp to pick up the pieces and carnage left behind from the first two films, Marybeth (Danielle Harris) hunts down the true secret to ending the voodoo curse that has left the ghost of Victor Crowley haunting and terrorizing Honey Island Swamp for decades.

The sequel, which was filmed outside of New Orleans, Louisiana from late May to mid- June, 2012, is a co-production of MPI/Dark Sky Films and Green’s Los Angeles-based ArieScope Pictures. 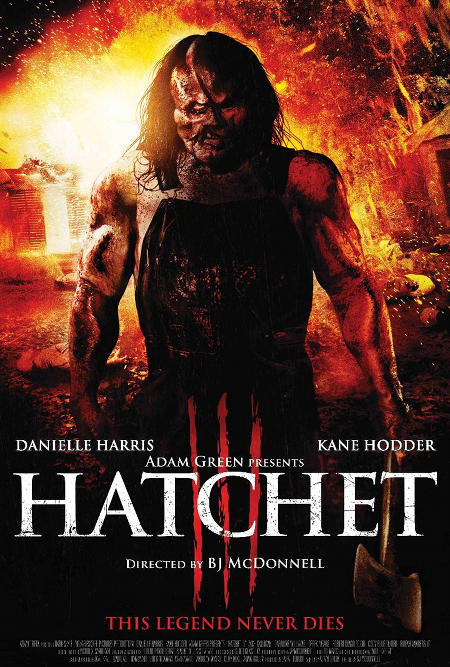