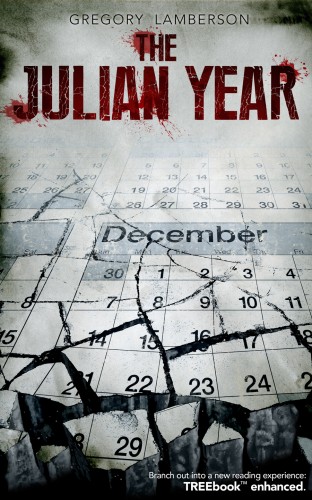 Medallion Press, a division of Medallion Media Group, has released the cover for The Julian Year by Gregory Lamberson. The novel is the first TREEbook (Timed Reading Experience E-book), a unique e-book platform for the ipad and android phones which employs time triggers and branching technology to provide numerous alternate versions of a story. Readers can download the MMG Sidekick e-reader for free from iTunes now, ahead of the novel’s December release, and can purchase titles from Medallion’s library through the app. TREEbooks can only be read through the MMG Sidekick.

The Julian Year is a horror/science fiction thriller that depicts what happens when every person on earth becomes possessed on his birthday, with the doomsday clock counting down the extinction of mankind in one year’s time. The lead characters are Julian Weizak, an obituary writer who becomes a leading columnist, and Rachel Konigsberg, a police woman born on Leap Day.

The MMG Sidekick measures the average reading pace of each individual reader, then causes the story to branch off in wildly different directions when the reader’s reading pace changes. The reader is unavailable that the storyline has changed until he reaches the end of the book, when he is free to jump around the alternate versions of events or simply start over, which will inevitably lead to a new reading experience.

“This remarkable new technology has enabled me to tell a story in a new way,” says Lamberson, author of the occult detective series The Jake Helman Files and the werewolf series The Frenzy Cycle. “This book is the first of its kind, and I’m honored Medallion selected me to be the first author to use it. A character can live in one branch, die in another, or become possessed in another. I’ve never been able to explore characters this fully before, because the technology dictates that I place them in different situations with different outcomes.”

Medallion and Lamberson will preview The Julian Year at C2E2 in Chicago Friday, April 26th – 28th. The publisher is giving away preview books which include sample chapters from The Julian Year, which will be published in December, and Storm Demon, Book Five in The Jake Helman Files, coming in October. Lamberson will sign copies of the preview book.