Yeah, not sure how excited you all will be about this but the info arrived for the Blu-ray release of TEXAS CHAINSAW the 3D remake of the remake of TEXAS CHAINSAW MASSACRE. Didn’t make it to a theatrical viewing of this one so when it arrives on Blu-ray, it will be the first time I’ve seen it, much like most of the rest of you I’m guessing.

So, here’s the breakdown from the press release, all your questions will be answered, maybe even a few you don’t want answered:

Texas Chainsaw continues the legendary story of the homicidal Sawyer family, picking up where Tobe Hooper’s 1974 horror classic left off. In Newt, Texas, people have been going missing without a trace for decades. Years later and hundreds of miles away from the original massacre, a young girl, Heather (Daddario), discovers that she has inherited a sprawling Texas estate from an unknown grandmother. To claim her estate, Heather goes on a road trip with her friends to Newt but learns that wealth comes at a price when she discovers the horror that waits in the cellar of her new mansion.

The Blu-ray and DVD features extensive bonus materials including audio commentaries, a look back at the history of the Texas Chainsaw series, exclusive interviews with the film’s director, producer and writers, plus multiple behind-the-scenes featurettes. Texas Chainsaw will be available on Blu-ray Disc and DVD for the suggested retail price of $39.99 and $29.95, respectively.

Special Features
Audio commentary with producer Carl Mazzocone and filmmaker Tobe Hooper
Special “Chainsaw Alumni” audio commentary with stars Bill Moseley, Gunnar Hansen, Marilyn Burns and John Dugan
“Texas Chainsaw Legacy” featurette – A look back at the history and 40-year legacy of the Texas Chainsaw Massacre series with filmmaker Tobe Hooper
“Resurrecting the Saw” featurette – A look at the development of Texas Chainsaw with director John Luessenhop, producer Carl Mazzocone and writers Adam Marcus, Debra Sullivan, Kirsten Elms and Stephen Susco
“The Old Homestead” featurette – A detailed look at the re-creation of the shooting location from the original Texas Chain Saw Massacre with production designer William A. Elliott and cast members (and Chainsaw series alumni) Bill Moseley, Gunnar Hansen, Marilyn Burns and John Dugan
“Casting Terror” featurette – Interviews with the cast including Alexandra Daddario, Trey Songz, Tania Reynolds, Keram Malicki-Sanchez, Scott Eastwood, Sean Sipos and others
“Leatherface 2013” featurette – An interview with Leatherface actor Dan Yeager on his interpretation of this legendary role, along with a look at the creation of Leatherface’s costume, mask and signature chainsaw
“Lights, Camera, Mayhem” featurette – A look at the film’s 3D photography with director of photography Anastas Michos along with a look at the creation of several sequences from the film
“It’s in the Meat” featurette – An detailed look at the film’s grisly special make-up effects with make-up effects supervisor Robert Kurtzman, and make-up artists Alex Diaz and Mike McCarty
On-Set Short Subjects: Five-Minute Massacres
– Burning Down the House
– Trapped in the Van
– Carnival Time
– Leatherface in Action
– Hot Times in Louisiana
– Bloody Good Times

Don’t know about you but that “Special Chainsaw Alumni” commentary track kind of peaks my interest!! 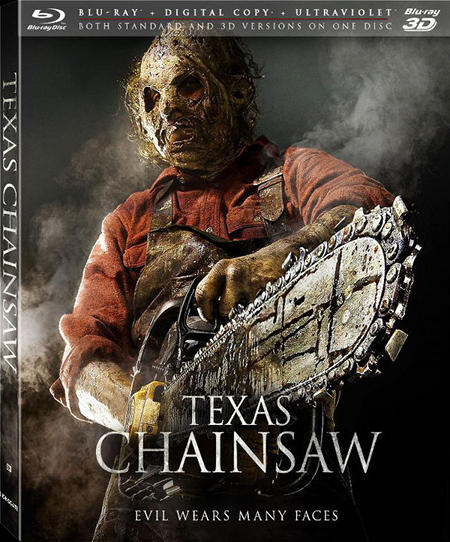