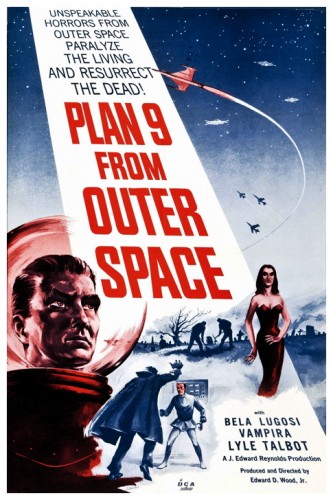 “In California, an old man (Bela Lugosi) grieves the loss of his wife (Vampira) and on the next day he also dies. However, the space soldier Eros and her mate Tanna use an electric device to resurrect them both and the strong Inspector Clay (Tor Johnson) that was murdered by the couple. Their intention is not to conquest Earth but to stop mankind from developing the powerful bomb ‘Solarbonite’ that would threaten the universe. When the population of Hollywood and Washington DC sees flying saucers on the sky, a colonel, a police lieutenant, a commercial pilot, his wife and a policeman try to stop the aliens.” (courtesy IMDB)

This week I have the pleasure to deliver unto you a real classic of movie-making, a film so ingenious that Hollywood spent three hundred times its budget in an attempt to reproduce the truly jaw-dropping effect this motion picture has had over millions, nay, billions of movie-goers all over the world. When it comes to naming the best film ever made, a lively debate will inevitably occur. There will be fanboys insisting on Star Wars IV A New Hope (1977), cinephiles advocating Citizen Kane (1941), champions of old Hollywood suggesting Gone With The Wind (1939) or Casablanca (1942), and the cult worshipers pushing anything by Akira Kurosawa, Stanley Kubrick or Alfred Hitchcock. But when it comes to naming the worst film ever made, there’s an almost unanimous candidate that always gets pegged for that sorry title: Edward D. Wood Junior’s Plan 9 From Outer Space (1959). 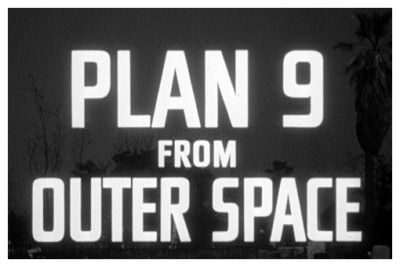 With its incoherent plot, jaw-droppingly dreadful dialogue, inept acting, threadbare sets, and special effects so shoddy they border on the surreal, Plan 9 From Outer Space has often been called the worst movie ever made, but it’s really just an oddly captivating disaster. Boasting genuine enthusiasm and undeniable charm, it’s obviously the work of people who loved movies and loved making them, even if they displayed very little actual talent. Extremely funny and consistently entertaining for all the wrong reasons, Plan 9 From Outer Space is an anti-masterpiece if there ever was one and, as The Amazing Criswell so brilliantly puts it, “Can you prove it didn’t happen?” Well, can you? 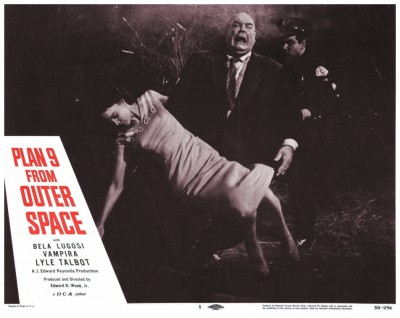 You know when you’re watching an Ed Wood film, you couldn’t confuse it with the work of any other filmmaker. It’s like any film by Frederico Fellini or Ingmar Bergman or Frank Capra – yet totally unlike any of them – he has an unusually distinctive style, a total individual. Love them or hate them, you can’t deny his films are certainly strange and unique, as was the life of Ed Wood Junior. He was someone who could be truly called a cult director, thanks largely to movies like Plan 9, his low-budget extraterrestrial extravaganza starring an extremely odd collection of actors. 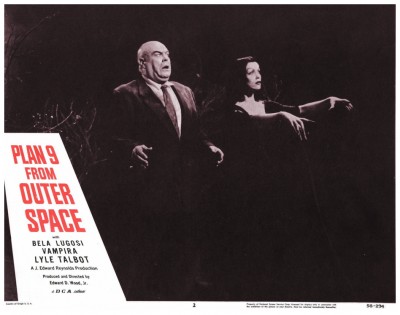 For those of you who have made it this far and still don’t know about Bela Lugosi, well, I’m not going to help you. Instead, watch Martin Landau‘s Oscar-winning performance as Bela in Tim Burton‘s Ed Wood (1994). In fact, you should do it right now! On second thoughts, best to leave it until after you’ve finished watching Plan 9. Bela had effectively peaked with Dracula (1931) and was on a slow sodden spiral downwards that would ultimately end with this, his final performance, as a nameless old man. He passed away after filming a single scene and was replaced by a much taller and more sober chiropractor who cunningly held his cape in front of his face to complete the deception. You probably didn’t notice. By this time Bela and I were no longer on speaking terms. His constant need for ‘medicine’ and cash had literally drained me dry – he was a real bloodsucker. 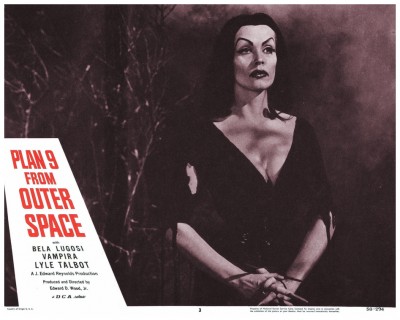 Gregory Walcott, who plays hero Jeff Trent, had roles in more than a hundred films and television shows, many of them westerns like Bonanza, Maverick, Wagon Train, The High Chaparral, Sugarfoot, Laramie, The Rifleman, and several episodes of Rawhide, through which he began a long collaboration with Clint Eastwood. Subsequently Walcott appeared in many of Eastwood’s films including Joe Kidd (1972), Thunderbolt And Lightfoot (1974), The Eiger Sanction (1975) and Every Which Way But Loose (1978). Non-Eastwood films include On The Double (1961) with Danny Kaye, Prime Cut (1972) with Lee Marvin, Norma Rae (1979) with Sally Field, and Sugarland Express (1974) directed by a 24-year-old Steven Spielberg. Walcott always regretted having anything to do with Plan 9 From Outer Space but, as he once told me, “It’s better to be remembered for something than for nothing.” Which is a nice way to say his life had been reduced to a trivia question. A hard one at that, worth at least a decent-sized meat tray. 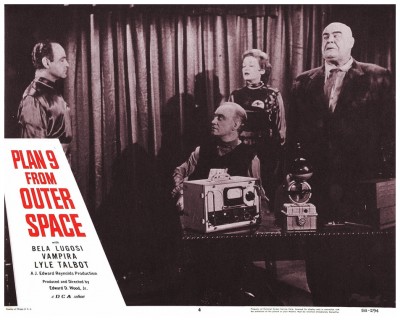 Tom Keene, who plays former major Colonel Tom, made his debut in the silent film The Just-A-Little-Late Club (1923), following through with The Godless Girl (1929) directed by Cecil B. DeMille, Tide Of Empire (1929), Tol’able David (1930) and Sundown Trail (1931). King Vidor cast him in the socially conscious Depression classic Our Daily Bread (1934) and, during the forties, he appeared in two Dick films: Dick Tracy’s Dilemma (1947) and Dick Tracy Meets Gruesome (1947). In the fifties he moved to television with guest roles in The Range Rider, Buffalo Bill Junior, Judge Roy Bean and The Adventures Of Ozzie And Harriet. His experiences making Plan 9 From Outer Space proved too much for Tom Keene, forcing him to retire from acting altogether to go into something far less stressful: Selling both insurance and real estate. 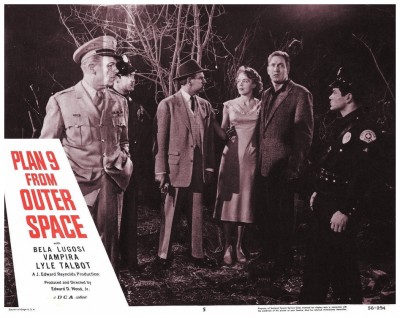 Swedish-born Tor Johnson weighed 181 kilograms at his heaviest, and actually had a full head of long blonde hair but shaved it all off to look more menacing as a professional wrestler. His film career began in 1934, getting bit parts in films until the early sixties, thereafter making appearances on television and in commercials. In the mid-fifties Tor befriended Ed Wood, who directed him in a number of films, most notably The Bride Of The Monster (1955) and Night Of The Ghouls (1959). Like Gregory Walcott and Bela Lugosi, Plan 9 From Outer Space was his final film role, not counting his non-speaking cameo in The Monkees movie Head (1968). Jack Nicholson, who wrote Head, once told me he always wanted to make a sequel, just so they could promote it as “From the people who gave you Head.” I’m not making this up. 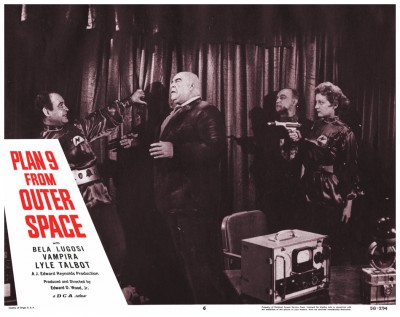 General Roberts is played by Lyle Talbot, whose incredibly long and varied show-business career began right after high school, when he joined a traveling tent show as a magician’s assistant. By 1931 he was in Hollywood just as sound films were beginning to take-off, and he not only had the look of a star, he sounded like one too, which was rare. Talbot was one of the founders of the Screen Actors Guild and the first Warner Brothers employee to join the union, much to their annoyance. He appeared in A-grade movies during the thirties, B-grade movies during the forties, and Z-grade movies during the fifties. Talbot took on a tremendous number of roles, oblivious to the quality of the films given him, hence his appearance in several Ed Wood films, including Jail Bait (1954) and the infamous transvestite tearjerker Glen Or Glenda (1953). After appearing in more than three hundred films and television shows, it’s no wonder he passed away from exhaustion in 1996, the last of the original SAGs to shuffle off this mortal coil. 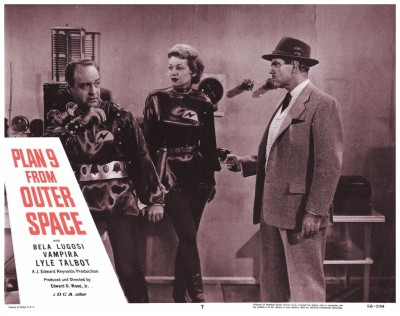 Criswell, first name Amazing, son of Astounding, was a psychic famous for sleeping in a coffin and making wildly inaccurate predictions, like Colorado would be struck by a space ray that would turn all metal into rubber, causing horrific accidents at amusement parks – or amusing accidents at horrific parks, depending on your point-of-view – and that mass cannibalism would become popular throughout America. To his credit he did get some things right, like the United States would become the new Roman Empire and collapse under its own weight, and that John F. Kennedy would not be able run for re-election in 1964 because something was going to happen to him in November 1963. He also predicted the complete destruction of the Earth by the year 1999 – which actually did happen but no-one noticed – yet he wasn’t able to predict his own death by natural causes in 1982. 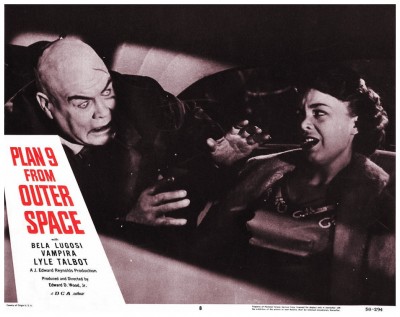 The alien ruler is played by John ‘Bunny’ Breckinridge, the descendent of an extremely wealthy Californian family who attended both Eton and Oxford Universities. Judging from his performance tonight, I hardly need to inform you that Plan 9 From Outer Space was his only film appearance. Openly gay during a time when it was very dangerous to be so, he was well known for his flamboyant lifestyle, his outrageous sense of humour, and famous friends like Noel Coward, Elvis Presley, Ed Sullivan, J. Edgar Hoover, Princess Margaret and yours truly. Shady characters indeed. Unfortunately, soon after the premiere of Plan 9 From Outer Space, Bunny was convicted on ten counts of ‘sexual perversion’ for taking two underage boys on a school excursion to Las Vegas, and was committed to the Pinky Tuscadero State Hospital For The Criminally Insane.

The hourglass with eyes is played by the world’s first female horror host, Vampira, who I was fortunate enough to work with during the fifties. I handled the money and we split everything straight down the middle, sixty-forty. I got the sixty of course because, as her sofa, I had more screen time. Decades later, when I was foolishly entrusted with hosting The Schlocky Horror Picture Show, I was delighted to have the opportunity to emulate Vampira, having studied under her…and behind her…and from a few other angles. She set the high standard to which all horror hosts aspire, but so few reach. I know I’m one of those few – mother told me so.

By the early sixties, Ed’s career as a filmmaker was already over, his dream of joining the cinematic greats was never to be realised. Unable to raise money for his own projects or sell any of his scripts, he barely survived by writing trashy pulp novels aimed at the sex market, one of which was filmed as the soft-P*rn titillater Orgy Of The Dead (1966) starring, well, me. Hey, a gig’s a gig. By 1978, Ed was drinking heavily and virtually homeless, but he never lost faith in his own films, particularly Plan 9 From Outer Space, and a whole new generation was about to rediscover them. Mere months before becoming one of the most famous directors of all-time, Ed sadly passed away.

What ever you may think about the films of Ed Wood, he had one great talent that no-one can deny. He could take his ideas and, against impossible odds and common sense, put them on the screen. While most mainstream directors of the fifties are now forgotten, the films of Ed Wood are still being talked about and enjoyed all over the world, which only goes to show that ‘ninety minutes of wrong DOES make a right’. It’s with this confusing thought in mind I’ll make my farewells, but not before inviting you back next week so I can scour your eyeballs with another nominee for the worst film of all-time on the most horrible news website of all-time…Horror News! Toodles!