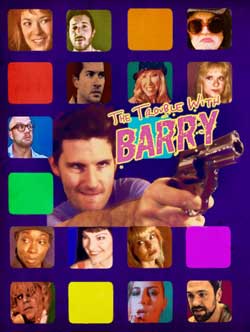 The Barry of the title is a self absorbed, out, but not too flaming gay actor whose multiple brushes with the law and party hardy, irresponsible lifestyle has left his career struggling for breath on the beaches of Malibu. When his own mother is no longer able to secure him pity nepotism roles in schlocky horror flicks, a down and out Barry takes a role in a webseries that stars an actress named “Pussy” played by Rena Riffel, an actress audiences may remember as stripper Penny in the notorious 1995 flop, “Showgirls”. The trouble mounts when a masked killer begins bumping off the cast and crew members, one by one. 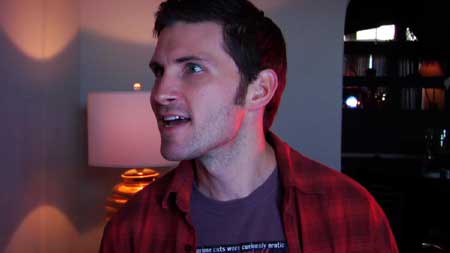 What is it then? Well…that’s not easy to determine either. It’s not really a movie with a genre, its more like an exercise demonstrating what happens when character and structure in a script are totally ignored. Or what happens when you don’t have a physical script, but want to make a movie anyways, so you have a group of people kinda shuffle from one very awkward scene to the next with a kinda similar plot that is followed, but not really. 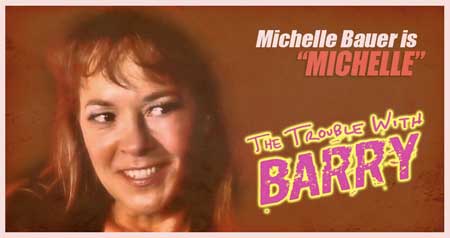 One of the many troubles with “The Trouble With Barry” is that it is an extremely low budget, extremely stupid horror movie that tries to mock the world of extremely low budget, extremely stupid horror films. Whether or not it is shitty on purpose, or shitty by default is difficult to tell, since “Barry” is so pleased with itself and so smug that I have to wonder if it thinks it is much more clever and ironic than it actually is.

Regardless, it is an expensive viewing experience. By that, I certainly don’t mean it has physical dollar value, since that is painfully lacking, but it is an enormously taxing film. Its inane pacing, and total fixation with piling on snappy one liners in place of real dialogue is absolutely maddening and draining. 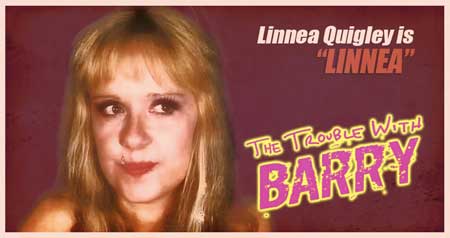 This movie is the cinematic equivalent of being stuck on a couch at a party with a vapid, overly effeminate gay guy who is obsessed with Hollywood and movie stars. At first, he may seem kinda funny, maybe even a little astute with the world he seems so obsessed with…but, very quickly, you realize that an hour and a half listening to this guy drone on and make bitchy comments about other people in the movie business is a sojourn straight to Hell.

While it slums it mostly in Z grade movie ville, “Barry” does raise its drunken head from time to time to take potshots at other, more established, better filmmakers. I have to wonder though- the people being parodied are known, but not necessarily so widely known as to ensure that some of the “jokes” will not go totally over certain viewers heads. I mean, other than rabid cinephiles, especially of the horror variety, who is would find get snide remarks uttered about Tiffany Shepis and Asia Argento? 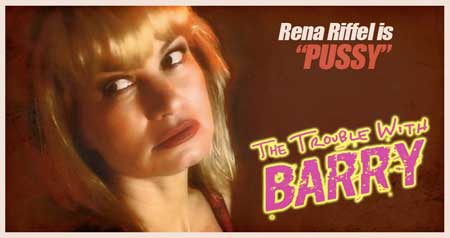 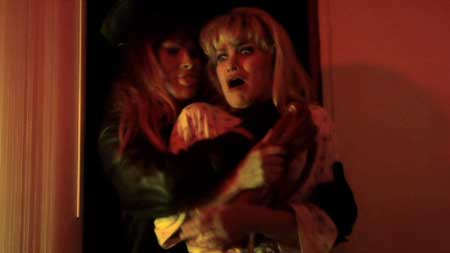 But, alienation reigns supreme with “The Trouble With Barry”. It’s a difficult movie to watch to the end…hell, its a difficult movie to watch period. There is something extra icky and off putting about a movie that only puts any effort at all into making fun of people who actually produce real films…you know, ones that have scripts, and plots and acting, and wardrobe, and makeup, and lighting and editing…those people might not always succeed, but, at least they put forth an effort into telling a story of some sort, not just mocking others via video camera.