Land of Shadow and Substance: The Four of Us are Dying

As with many Twilight Zone episodes, the original tales they had generated from were typically rewritten by Serling, adding this and taking away that, and usually always keeping with the original premise.
With The Four of Us Are Dying, a tale by George Clayton Johnson about a man whose changeable face appears to others as the person they most want to see, once again rewriting was the case. In this writer’s opinion, the tale’s original ending of having a gas station attendant inadvertently recognize as the person he most wants to kill, would have provided a more twisted conclusion. However, one does wonder whether the tale was purposely changed due to the era in which it was created, a time when most might have found the tale too macabre. Regardless, the changes still offer a successful ending. 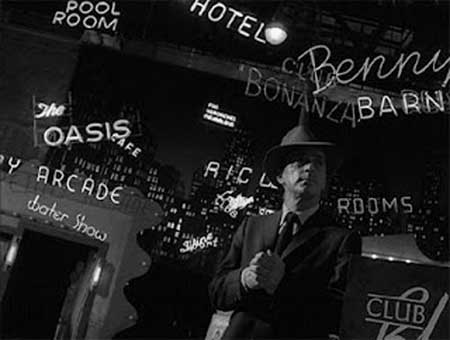 The hardest aspect of constructing this episode, according to producer Buck Houghton, was finding four actors who could play the role with overall similarities, making them appear as the same person. Eventually, four with the same eye color were found and as they say…the rest is history. Coincidently, six actors played this same role in the episode. However, two were used only during the opening scene, when the camera continuously pans from the primary character shaving directly in a mirror, to a changed face version (the second actor) from an implied copy off to the side. In actuality, the implied was simply a frame with the second actor also shaving on the opposite side of it. Brilliant!

Arch Hammer (Harry Townes), a corrupt man with the ability to change his face has a vindictive plan; to obtain a dame, a bankroll and to get out of town unscathed. After checking into a shabby hotel loaded with a few newspaper clippings, each having a photograph of the recently departed he intends to depict, he begins his façade filled evening with a shave.

After primping, Hammer views the first photograph, Foster (Ross Martin), a recently deceased trumpet player. His intent it to get Foster’s heartbroken girlfriend Maggie (Beverly Garland), a lascivious and indelicate lounge singer, to leave town with him. His impersonation is flawless and successful as she agrees. As he’s leaving, his plan is almost foiled when being recognized by an amazed old band member who chases after him. Quickly changing back into his old face just as the guy approaches, he is able to fend off and the obviously perplexed guy apologizes for the mistake and slinks away. 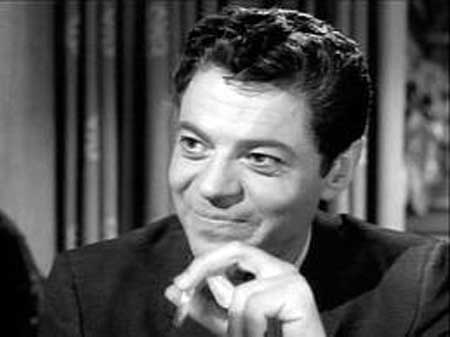 Next, Hammer impersonates a murdered mobster, a Mr. Virgil Sterig (Phillip Pine), and pays a visit to Penell (Bernard Fein), the man who had Sterig disposed of. His intent is simple, to extort money.
Things turn bad and Hammer must flee from two henchmen sent by Penell. While fleeing, Hammer as Sterig, finds himself trapped at the end of a dark alley. It is now that the audience is allowed to see Hammer’s Achilles’ heel; that he must have a face to look at in order to change. As the thugs approach, Hammer desperately searches the shadows for a face, fortunately finding one on a worn poster pasted to the wall of a has-been fighter by the name of Andy Marshak (Don Gordon).

The would-be killers eventually catch up with the trapped man, who has his back toward them. He turns around and much to their amazement, it is Hammer emerging as Marshak, and therefore, perplexed as it seems, they obviously leave Marshak alone.

Confident and elated, Marshak re-joins society on the city sidewalk, strolling passed a newsstand where low and behold, the man working it happens to be Marchak’s real father (Peter Brocco) and notices him. Marshak, preserving Hammer mentality and in fact has never met this man before, bears the brunt of a hardened relationship. La familia choice words are spoken and Marshak shoves the father aside. While fleeing back to his hotel room, the old man vows to fully disown him.

There is a knock at the door and Hammer answers appearing as his self. It is a detective (Milton Frome) finally having tracked the two bit hustler down. Hammer goes quietly, at least until the two reach the lobby’s glass spinning exit door, where Hammer continues going around, back in and coming out looking like Marshak again. The detective inquires as to whether he has seen a man resembling Hammer and Marshak replies no. 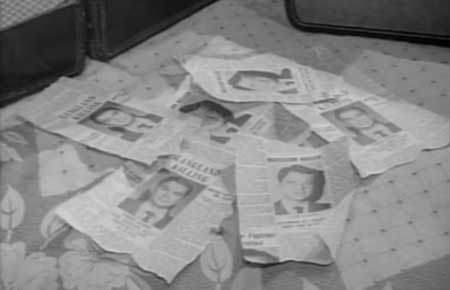 Heading down the street, Hammer, gleeful to be rid of the detective but still retaining the Marshak appearance, runs into the gun toting father intent on maintaining his vow and eliminating his wicked son. Hammer pleads with the old man to allow him time to concentrate and change in order to prove that he is a case of mistaken identity. But, the old man has little patience and shoots Hammer. Collapsed on the ground dying, Hammer’s face continually changes, going through all the faces of the evening before finishing with his true self.

Next time – Third From the Sun