Home | We Will All Know Her Name! – The Trailer For CARRIE Arrives!!

We Will All Know Her Name! – The Trailer For CARRIE Arrives!!

It appears from the footage seen that they don’t sway to far from King’s source material and it all just looks polished and great. Check it out for yourself and see what you think.

Synopsis: A reimagining of the classic horror tale about Carrie White (Chloë Grace Moretz), a shy girl outcast by her peers and sheltered by her deeply religious mother (Julianne Moore), who unleashes telekinetic terror on her small town after being pushed too far at her senior prom.

The quiet suburb of Chamberlain, Maine, is home to the deeply religious and conservative Margaret White (Moore) and her daughter, Carrie (Moretz). Carrie is a sweet but meek outcast whom Margaret has sheltered from society. Gym teacher Miss Desjardin (Judy Greer) tries in vain to protect Carrie from local mean girls led by the popular and haughty Chris Hargenson (Portia Doubleday, Youth in Revolt), but only Chris’ best friend, Sue Snell (Gabriella Wilde, The Three Musketeers), regrets their actions. In an effort to make amends, Sue asks her boyfriend, high school heartthrob Tommy Ross (newcomer Ansel Elgort), to take Carrie to prom. Pushed to the limit by her peers at the dance, Carrie unleashes telekinetic havoc. Brian De Palma’s 1976 film version of CARRIE earned Oscar nominations for stars Sissy Spacek and Piper Laurie.

After you’ve watched the trailer, make sure to give CARRIE a call!! 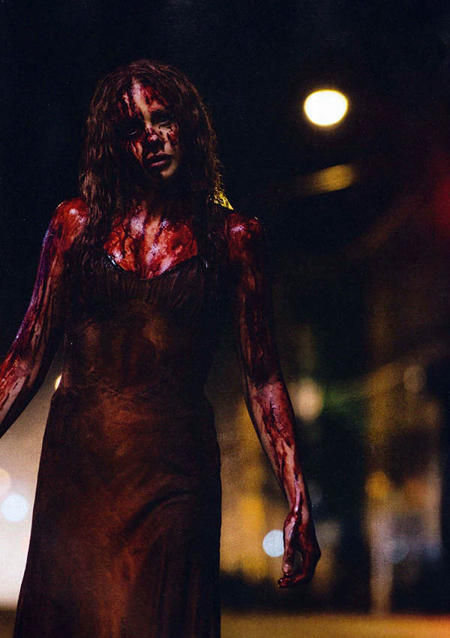