Land of Shadow and Substance: What You Need

Justice served is always a good premise and there are a number of good Twilight Zone episodes that depict this. However, this is probably one that ranks closer to the bottom of the list. While still an entertaining episode, it does suffer from crawling along at a snail’s pace and never fully engages the viewer. The tale, written by Lewis Padgett under the pen names Henry Kuttner and C.L. Moore, originally surrounded a creative scientist and a machine that can read futures. However and surprisingly, Serling wasn’t keen on the overall science aspect and instead chose to rewrite it using simply a peddler with an uncanny ability. Nonetheless, the episode does harbor a certain amount of suspense and is certainly worth a look. 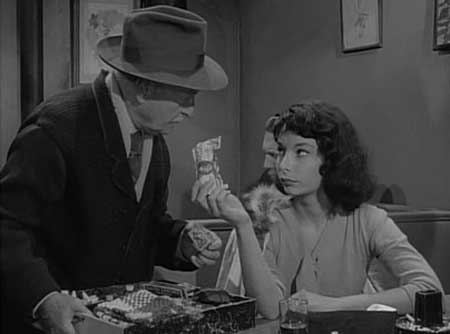 Sidewalk salesman Pedott (Ernest Truex) is a kindly old man with a special ability; he can read the future of people and upon meeting them, offers what they need, usually with splendid results. However, tonight’s chance evening has him crossing paths with a very corrupted man.

The man, a Mr. Fred Renard (Steve Cochran), upon initial introduction, has every indication of being your average thug, willing to take rather than earn. His life has seen hard times, all due to his own hand, which the episode never explains why, but does fully imply. Nonetheless, keeping a constant eye out for something better, his ruthless will not be contained.

The evening is chilly and damp as Pedott enters Del Rio, a tavern with a collection of patrons seemingly drowning sorrows, his carefree, happy grin perusing the place until noticing Renard and his normal sour look occupying the corner of the bar. Suddenly, Pedott’s obvious joy turns to concern; for he knows something that the rest of us have yet to learn. 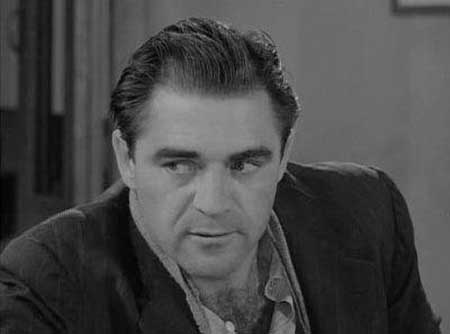 Shaking it off, he begins making rounds, stopping at various tables and trying to sell his college of wares. At a woman (Arline Sax), he inquires whether she is in need of anything and after some quick, small thought, she decides upon matches. Viewing deeply into her face, he offers a bottle of cleaning fluid instead, telling her it is what she needs.

He continues on to the bar and begins a conversation with Lefty (Read Morgan), a former baseball pitcher with a ruined arm. Lefty says there is nothing he needs, other than a new arm, but Pedott knows and much to Lefty’s skepticism, offers a bus ticket to Scranton, Pennsylvania. The pay phone rings. It is a call from a baseball manager who has been seeking Lefty for quite some time and wants his aid in coaching a minor league team. Where? in Scranton. Amazed, Lefty, who has been down on his luck for quite some time, ponders making a good impression. But, there is a spot on the only suit he owns and may prove detrimental during an interview.

Overhearing Lefty’s voiced concerns, the girl approaches and offers, successfully no less, to clean the spot with the remover Pedott had given her. Pedott sneaks out as the scene implies the beginning of a blooming relationship.

Meanwhile, Renard, who has been watching the events unfold, follows Pedott outside. Full of gruff, Renard asks the old man if there is something he needs. Pedott gives him a pair of scissors. Renard isn’t impressed until, while riding an elevator later that night, his scarf inadvertently gets caught in the doors and begins choking him as it rises. Grasping the scissors from his pocket, he cuts away the scarf, essentially saving his life.

Entering his apartment, Pedott is shocked to find Renard, having already broken in and waiting. Renard begins to banter about how the old man has a million dollar talent and it should not be wasted on frivolousness, like bus tickets and spot removers before violently forcing Pedott to give him what he needs. Pedott offers an ink pen that happens to be leaking and drips a single drop on the horse racing section of a newspaper below. Renard assumes that the drop has selected the race’s winner, and his disposition changes. 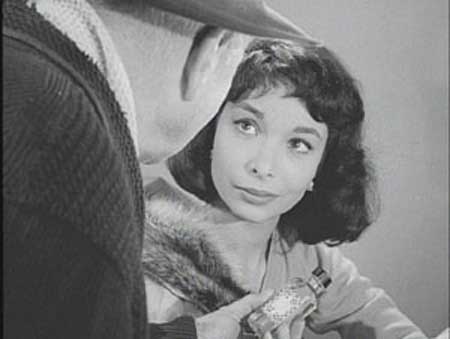 The following evening, having already cashed in on the winning horse, Renard is still unsatisfied and seeks Pedott. Finding him on street corner, he mentions that the pen is broken; that it will no longer drip. Pedott expresses that the items he gives are only good for one time use.

After some small talk in which Renard accuses his bad luck on being born under a bad sign, commands Pedott to keep supplying him with what he needs.
Full of concern, Perdott mentions that he cannot give him what he really needs; compassion, humor, hope and peace of mind; that it is beyond his ability.

Gripping the old man by the shoulders, Renard forces him to look into at him; into tomorrow and to give him what he needs. Pedott cringes and looks away before reaching into his standup trunk of goods and pulling out a box containing a pair of shoes. Renard yanks them from his hands and puts them on, complaining that they are too tight and have slippery soles. Still, Renard assumes that he needs them to walk somewhere in order to find what he really needs.

Standing in the middle of the street, the two chat back and forth, with Renard re-inquiring whether the shoes are what he needs. Pedott tells him that they are not, but that they are what he, himself needs.

A speeding car comes barrowing around the corner at Renard. Trying to avoid, he slips and is run over, killing him. Pedott approaches the corpse, mentioning that what he saw was his own death if he continued dealing with Renard, and so he eliminated him.

As gawkers begin to gather at the accident scene, a surprised onlooker with messy hair asks Pedott what occurred. Pedott answers that it was a hit and run and then hands the man a comb, at no charge, before walking away.

A photographer appears and asks the man to take his picture for the newspaper and the man realizes that the comb is exactly what he needed.

Next time – The Four of Us Are Dying