Home | New Teaser For UNDER THE DOME Uncovers Some Damage

New Teaser For UNDER THE DOME Uncovers Some Damage 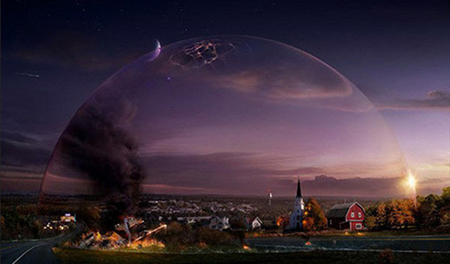 The CBS adaptation of Stephen King’s UNDER THE DOME is still being filmed down in Wilmington NC, and it’s set to air on the network on June 14th! Cutting it a little close? Maybe not but it sure feels like it. At least the action will be fresh and there will be little if any time for anything to leak onto the net before the premiere.

During Wondercon this weekend a second teaser premiered and still we see no actual footage from the production but we do get a couple of quick glimpses at some destruction and some tweets or quotes apparently from those involved inside the dome. While rather uneventful it still peaks interest and is worth a quick look.

Here’s all the details you need for now:

Under the Dome”, which premieres Monday, June 24 (10:00-11:00 PM, ET/PT) on CBS, is based on Stephen King’s bestselling novel “About a small town that is suddenly and inexplicably sealed off from the rest of the world by an enormous transparent dome. The town’s inhabitants must deal with surviving the post-apocalyptic conditions while searching for answers to what this barrier is, where it came from, and if and when it will go away.”