Have you ever awakened from a dream and thought you were still dreaming? Or, better yet, have you ever remained dreaming and thought you were awake? This is the premise for Perchance To Dream, a tale written by Charles Beaumont, who, coincidently, also wrote the script, his first of many notable Twilight Zone tales yet to come, an accolade second only to Rod Serling himself.
While the primary scene locale is simply that of a psychiatrist’s office, it is the carnival dream scenes that steal the show by eliminating any inkling of joy and instead depicting fear and creepiness in a foggy haze complete with twisted camera work. Richard Conte is superb as the anxiety ridden lead. By using tight dialogue to create a slow suspenseful build that increases with every scene the viewer is taken on a hundred mile per hour hallucination that grips from the beginning and never let’s loose. 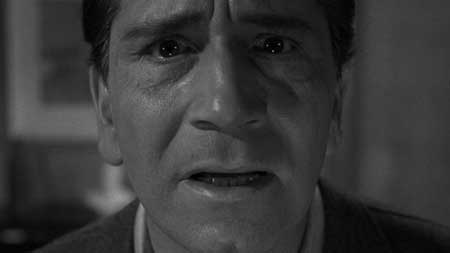 Edward Hall (Richard Conte) has a serious dilemma. Chronically aware of his weakened heart’s condition since teen years, Edward is now to the point where just the tiniest fright could prove fatally detrimental. In more recent days, with his dreams having become more vivid, so has the increased emotional distress. Fearful and certain that the dreams will be the source of his demise, he avoids sleeping at all, at least for the past eighty hours or so. However, this is a catch twenty-two, also adding unneeded stress to his already frail heart. But, if he falls back asleep, she will be there again.
Paying a visit to his psychiatrist, Dr. Rathmann (John Larch), a clearly frightened Edward enters his office and mentions that he needs rest. The doctor offers his couch and Edward lies down and closes his eyes. A moment later, much to the shock of Rathmann, Edward pounces up and begins to explain the situation. At first hesitant, for fear that he may be seen as crazy and end up locked away, he eventually explicates, emphasizing how his dreams have become much like film serials and running in chapters. 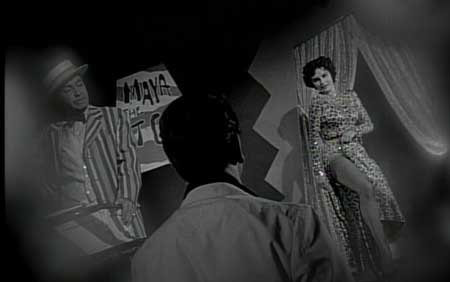 As the two chat, through Edward’s heavy stressed breathing he discusses a boat painting on the wall that he implies being able to make move with simply his mind, followed by a flashback of a car crash when he was certain that someone was in the rear seat, even though they weren’t. With sweat dripping from his brow, Edward requests fresh air and goes to the window. Upon opening it, he peers out to the street far below and mentions that it is a long way down. Leary that he may very well jump, Rathmann approaches, closes the window amd guides him away from it.
Edward continues on with his tale, explaining that in the dreams at a somewhat demented amusement park, he meets a seductive dancer named Maya (Suzanne Lloyd), who is attempting to kill him by using the lure of the carnival’s more exciting offerings. Already having followed her into the funhouse, where he had been subjected to plenty of creepy oddities, from skulls to devils to bug eyed aliens, and that when he awoke, his heart was racing and took some time for it to finally calm.

He goes on to say that the following evening, after fighting off sleep until one a.m., Maya is back, this time tempting him to ride a roller coaster, which, by feeling compelled to follow her, he does. Suspense builds throughout the ride as Maya, riding alongside, grins wickedly. Edward yells out, telling her to stop the ride. She says they can’t; that it is too late and laughs heartily as she tells him to jump.
Back in the office the discussion ends and Edward leaves, only to see the receptionist, who uncannily resembles Maya. In a panic, Edward charges back in through the doctor’s office and dives out the window, plummeting to his death on the sidewalk below. Or did he? 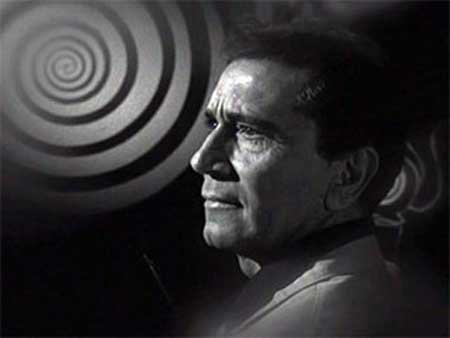 Calling his receptionist in, Rathmann explains that Edward, who happens to still be lying on the couch, is dead. That he, upon entering but a few moments ago, only complained of exhaustion before laying down, instantly falling asleep and then suddenly screaming out.

Next time – What You Need