If you think back you’ll recall a few weeks back I put this release on your radar. It’s the latest from Dark Sky Films and it’s called MANBORG. It will be getting a limited theatrical release but that same day it will also make its DVD debut. Last time we spoke all I had was a release date and that kick ass artwork, today I have the rest of the puzzle.

The forces of Hell have risen to the surface of the Earth to wreak unspeakable havoc on humanity, and it will take a real superhuman to save the world. Or at least Manborg – a spectacular creature of the future and the hero of MANBORG, the cult favorite sci-fi/fantasy homage coming to select theaters and DVD on April 30, 2013, from Dark Sky Films.
The armies of Hell have taken over the Earth, and all that stands in the way of the villainous Count Draculon and humanity’s total extinction is a motley crew of misfits led by the mighty Manborg: a warrior who’s half-man, half-machine but all hero.
Once a young soldier killed during the first war against Hell, Manborg (Matthew Kennedy, Lazer Ghosts 2) reawakens in the future, rebuilt as a walking weapon and mankind’s last hope. Struggling to learn the secret of his origins, Manborg unwittingly befriends a post-apocalyptic Australian punker (Conor Sweeney, Heart of Karl), a knife-wielding vixen (Meredith Sweeney, Father’s Day), and a kung fu master (dubbed by Kyle Herbert of DRAGON BALL Z, STREET FIGHTER) before finally squaring off against Count Draculon (Adam Brooks, Father’s Day) in a desperate and bloody bid to take back the Earth.
This campy, comedic action flick, which Variety called “enjoyably ridiculous,” is also an affectionate and clever tribute to fan favorite ’80s films and video games like The Terminator, RoboCop, and Mortal Kombat.
MANBORG is a tour de force for writer-director-editor-makeup artist Steven Kostanski, whose credits include the horror hit Silent Hill and Guillermo del Toro’s forthcoming sci-fi adventure Pacific Rim. This lo-fi sci-fi epic from infamous filmmaking collective Astron-6 (Father’s Day) was met with an uproariously enthusiastic reception from audiences. Executive produced by TIFF Midnight Madness guru Colin Geddes (Ultra 8 Pictures) and Toronto After Dark’s Peter Kupowsky, MANBORG celebrated its world premiere at Austin’s 2011 Fantastic Fest and also impressed fans at the Toronto After Dark Film Festival and Fantasia. It has played more than 30 major film festivals worldwide including Whistler, Lund in Sweden, Boston Underground, U.K. Sci-Fi, and Neuchatel in Switzerland.
Special Features: 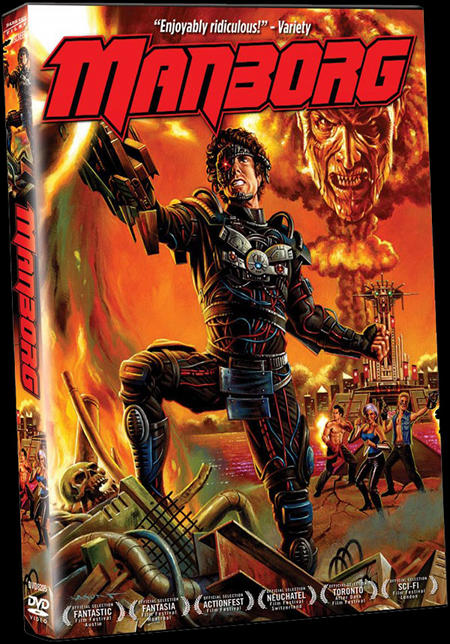