Land of Shadow and Substance: Time Enough At Last

As a short story, written by Lynn Venable for a 1953 issue of If magazine, the tale appeared bland and with very little dialogue. While the premise was undeniably cunning and crafty, it still lacked, and probably would have been completely forgotten had Rod not taken it under his wing and created characters with substance. In regards to this, the audience gained insight into the main character, cringing at the bookish little man’s treatment by his wife and boss, and having sympathy at his plight. The set used for depicting the horrendous explosion was built on springs, thus allowing both camera and set to rattle at the same time. And, the same steps used to film Pal’s Time Machine was used for this episode’s conclusion. 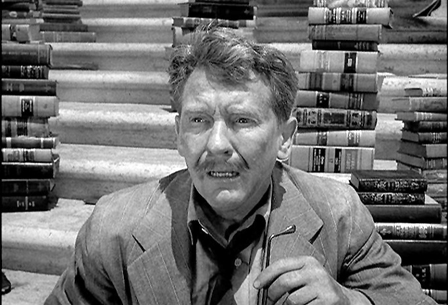 Bank Teller Henry Bemis (Burgess Meredith), a thickly bespectacled, kind hearted little man desires nothing more than to read and does so at every opportunity, even in between customers. However, everywhere he turns, from his harsh, business only and efficient minded bank manager boss (Vaughn Taylor), to his viciously cruel, non-understanding nor wavering, domineering wife (Jacqueline DeWit), the printed page proves elusive.

But, there is one place he can sneak to in order to find peaceful seclusion, the bank vault, and it is there that he spends his lunch hours, armed with media.

Time passes and he closes yet another finished book, sitting back with a look on his face so powerfully emitting delight, contentment and joy, that the audience can almost feel the gratefulness. A few moments later he looks at the day’s newspaper, peruses the headline “H-Bomb Capable of Massive Destruction” and the stage is set.

Glancing at his watch, obviously keeping vigil over break time, the crystal shatters, immediately followed by a horrendous explosion that tosses him about, knocking him unconscious. 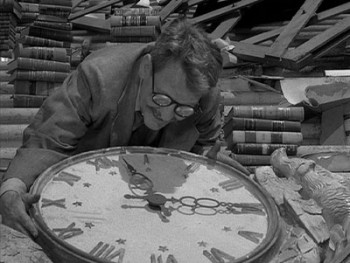 He awakens, stunned and confused, exits the vault and is subjected to the destructive after effects. In awe, he stumbles and trips over beams, rafters and rubble, up the stairs and into the bank’s main lobby, where, while bumping into a desk, he is jolted by his stringent boss’s voice. Peering over the desk, he realizes that it is only recorded dictation, and cringes at the sight of the detached hand still clinging tightly to the corded control.

He maneuvers about the annihilated obstacle course that was once the bank and finds his way outside, only to be shocked by even more damage, a world that is destroyed, leveled and gone.

Struggling through the chaos, he tries a payphone and calls out for his wife before finally realizing and accepting the fact that he is the last man on Earth. Seeking solace and questioning his existence, he takes consolation in gathering food, finding a place to sleep and basically surviving. But as loneliness and solitude begins to heavily weigh, the cracks begin to show.

Upon finding a pistol, he places it to his head, justifying the act due to the dismal situation. But, before pulling the trigger, he notices what is left of a library, with books scattered all about. 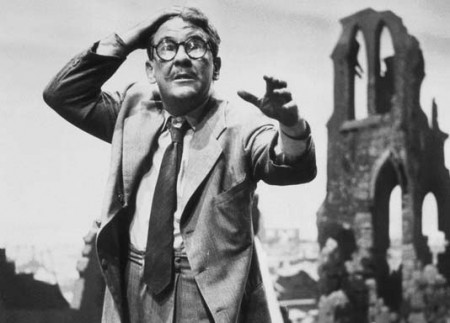 Suddenly his disposition is lifted. With hopes raised, he goes about giddily gathering up the books, stacking them on the entrance steps into organized monthly piles, planning years ahead of wonderful reading…because there is time enough at last.

Comfortably resting, he happily sits amongst the stacks and spies a lone book, lying not far from his feet. Leaning over reaching for it, he stumbles and falls, throwing his glasses to the hard concrete, shattering and disintegrating the thick lenses. Picking up the useless frames, he sadly peers to the sky and cries out that, “it just isn’t fair, not fair at all.”

Next time – Perchance To Dream

Land of Shadow and Substance: Time Enough At Last