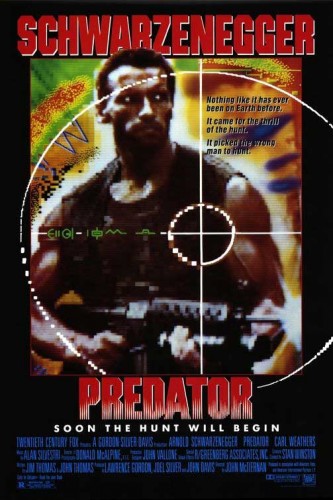 “Dutch and his group of commandos are hired by the CIA to rescue downed airmen from guerillas in a Central American jungle. The mission goes well but as they return they find that something is hunting them. Nearly invisible, it blends in with the forest, taking trophies from the bodies of it’s victims as it goes along. Occasionally seeing through it’s eyes, the audience sees it is an intelligent alien hunter, hunting them for sport, killing them off one at a time.” (courtesy IMDB)

A popular gimmick of the cross-breed action movie is to add two parts action, one part monster and overcook for two hours. Mainstream examples of this phenomena range from the good – Aliens (1979) – the bad – Leviathan (1989) – and the downright ugly – Split Second (1992). Having dipped into this pot for more than two decades, my old friend Arnold Schwarzenegger has made the most from a career constructed around fighting a range of evil incarnations. Terminator II Judgment Day (1991) introduced an advanced form of programmed killer, Jingle All The Way (1996) combined the evils of Christmas consumerism with the evils of casting Sinbad, and End Of Days (1999) aimed to cash in on Y2K paranoia with misguided apocalyptic results. With the exception of Total Recall (1990), it seems the bigger the budget, the blander Arnie got. While he kept trying to rekindle his blockbuster action-man status, he would have been wise to go back through his archives and revisit one of his more primitive roles as a special forces operative in John McTiernan‘s survival thriller Predator (1987).

Hedging his bets nicely in this shape-shifting movie (gang action romp changes into primal suspense), McTiernan fashions some brazen gung-ho caricatures into endearing heroes of the shoot-first-ask-later pedigree. Beginning with a seemingly routine reconnaissance mission for Dutch and his crack team of soldiers (to free diplomats held hostage in the jungle by Latin American guerrillas), this movie switches genre gears smoothly when a mysterious camouflaged entity begins picking off the squad one at a time. Hemmed into rugged bushland, the actors perspire in an aesthetically pleasing manner for McTiernan’s mobile camera which negotiates the terrain in slow menacing moves. Framing characters in the foreground under swaying foliage and evoking the presence of the enemy hunter, McTiernan’s displays a subtle talent for pressing the right buttons when intensifying the already stifling atmosphere. Also congruent to the steadily building suspense is Alan Silvestri‘s terrific music, which is announced with gusto over the opening credits when the charismatic heroes are introduced with steely glares and ostentatious poses. Arnie has never looked healthier as the muscle-bound cigar-chomping group commander, and Jesse Ventura‘s comical macho-saurus invocation of uninhibited bravado is personified by his ridiculous signature weapon – a gatling gun nicknamed Old Painless.

It seems ironic that the main set piece – an explosive kinetic fire-fight between the guerrillas and our heroes – is well forgotten by the time Dutch reverts to some inventive and primeval survival techniques to combat his sophisticated alien adversary. With the battle incorporating a host of expensive second unit set-ups and some galvanising stunts, McTiernan displays his storytelling abilities brilliantly by refusing to indulge in elongated action, swiftly moving his film into engrossing realms more involved in the primitive rather than the pyrotechnical. That being said, the technical pleasures of Predator are of the highest calibre. Stan Winston‘s rastafarian warrior is a stealthy nightmare of latex, firepower and bad dentistry. Meanwhile, a fantastic scene involving some of the quickest landscape gardening is likely to offend environmentalists in this millennium, works as a thrilling continuity of awesome arsenal, angry faces, supersonic sound and forest decimation.

The two-disc DVD I recently viewed has an amazing assembly of thoroughly engrossing special features, though it may well be re-released yet again in conjunction with the release of the new film Predators (2010) this year. There’s a documentary entitled If It Bleeds We Can Kill It: The Making Of Predator, an unbelievably entertaining retrospective look back on the project in most of its phases with crackerjack interviews with the prime principals and inserts of various cast and crew repeating the famous line “You’re one ugly motherf*cker,” and Stan Winston’s contribution is, as usual, a highlight. Other featurettes include Classified Action, The Unseen Arnold, Old Painless, The Life Inside (a tribute to the late Kevin Peter Hall, the Predator himself), Camouflage, Welcome To The Jungle, and Character Design (a complete dissection of the combat attributes and features of the Predator). 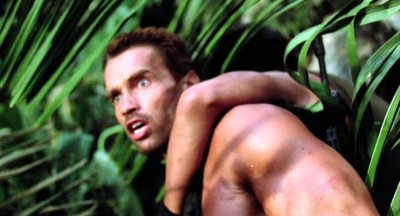 With these spicy ingredients added to the audacious premise, John McTiernan’s Predator is nothing short of a visual feast. How times have changed – in this century it’s a little hard to believe that McTiernan was once declared the new hope for action pictures. After an interesting debut with the unsettling sleeper Nomads (1986), he hit gold with the double-whammy thrill rides of Predator and Die Hard (1988), ranking alongside The Terminator (1984) as the most seminal action pictures of the eighties. After the rousing thrills of The Hunt For Red October (1990) and the too-clever-for-its-own-good Last Action Hero (1993), it’s been a long, slippery downhill journey for Mr. McTiernan. Destination: Shitsville. Medicine Man (1992), The Thirteenth Warrior (1999), The Thomas Crown Affair (1999), culminating in Rollerball (2002), his sorry remake of the seventies original. And it’s on that sour note that I will respectfully request your persistence…I mean, presence next week, when your leg will be crudely humped by another cinematic dog from…Horror News! Toodles!