This is one of my favorite episodes and one of the very first episodes to have a twisted ending, something that the show would soon become widely known for. It is also one of the few episodes that featured a main character a viewer will love to hate, leaving the observer almost grinning and quite possibly satisfied at the inevitable conclusion. Daily Variety praised it, calling it “a little gem” and gave personal compliments to Rod.

Walter Bedeker (David Wayne) is a man afraid of everything capable of causing illness. From draftiness to germs and everything in between, he is constantly fearful and on guard for the next vague sign of sickness, remaining firmly diligent and convinced that a bug will eventually catch up and health will deteriorate. This translates into chronically complaining with cruel sarcasm at his doting wife Ethel (Virginia Christine), belittling her while pondering aloud why a man has such a small lifespan in the larger, grand scheme of things. And, according to his doctor (Raymond Bailey), Walter has nothing wrong, other than being a more than average hypochondriac.

Mr. Cadwallader (Thomas Gomez), a rotund, sly, smirking fellow, aka the Devil, has always been invisibly nearby listening to Walter and his rants. Alone in his room, Walter is once again pondering his meager existence when Mr. Cadwallader appears with a proposition, his soul for immortality. While the concept is appealing, Walter is still skeptical, seemingly more concerned with his features aging and becoming decrepit looking the longer he would potentially live than with the fact that he would be doomed for all eternity. Cadwallader pounces, making mention that Walter drives a hard bargain and sweetens the deal by assuring consistent appearance, adding the power of indestructibility and even including an escape clause, a clause that, if and when Walter ever tires of living, he need only summon Cadwallader in order to end it. Walter accepts the terms and the deal is sealed, notarized with a smoking, three pronged stamp.

Immediately, Walter is a completely new man. No longer afraid, he proceeds to test indestructibility by purposely throwing himself in front of both an oncoming subway train, as well as a city bus. Always unscathed, but remaining verbally cruel, he settles for monetary gain with respective insurance company agents. However, after fourteen so-called accidents, nothing thrills anymore and he begins to realize having been duped, forced to live a non-exciting mundane life. 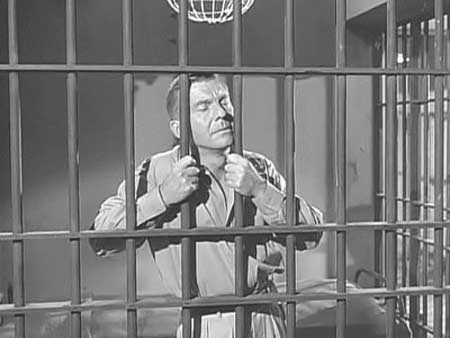 Seeking a thrill, his wife watches in horror as he combines a typically lethal concoction of iodine, rubbing alcohol and ammonia in a glass and drinks it. Referring to it having the taste of weak lemonade, there is no ill effect. Disappointed, he wonders what it would be like to fall from a building. Heading to the roof of their high rise, a distraught Ethel chases and pleads for him not to do it.

At the top, Ethel continues to beseech and physically tries to keep him at bay. The two tussle and she accidently falls to her death. The ever self-centered Walter couldn’t care less, suddenly recognizing that this could be an opportunity to experience the state’s electric chair. Back in their apartment, he gleefully telephones the police and confesses to murder. 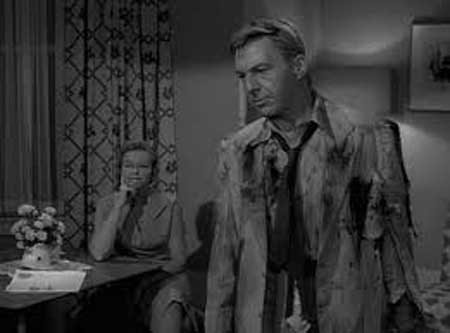 The trial gets underway, with the threat of the death penalty quite real, and trying desperately to save his client’s life, Walter’s attorney implores him to take this all very seriously. Walter remains c**ky and unfazed and continues being happy go lucky, encouraging potential execution.

Found guilty, Walter is sentenced to life in prison with no possibility of parole. Reality quickly invades and he realizes the error of his ways, for his life, however long he chooses, will now be spent in a cage.
Solemnly pacing in the holding cell the night before he is to be taken to his new prison home, Cadwallader appears and inquires whether he would like to exercise the escape clause. With only one other pending option, Walter concurs and is given a fatal heart attack. As he falls dead to the floor, a Mr. Cadwallader laughs in the background.

Next time – The Lonely