One of the pivotal films in this horror fans growth, 1981’s THE HOWLING is going to get the Blu-ray treatment from SCREAM FACTORY and that is all good. In announcing their release of THE HOWLING Scream Factory continues its long string of awesome must have Blu-ray releases.

No special features yet, we’ll get to hear about those later in March but, I do have the cover art for you and it’s looking good! 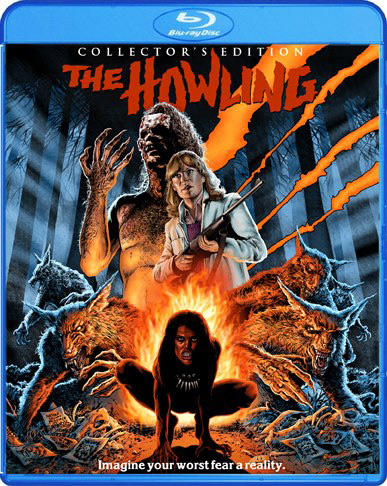 “From the director of Gremlins and Piranha comes the ultimate masterpiece of primal terror. Filled with edge-of-your-seat suspense, “genuine thrills [and] amazing special effects”, this riveting werewolf tale sinks its teeth into your deepest fears and never lets go! Severely traumatized by a near-fatal encounter with a serial killer, TV newscaster Karen White (Dee Wallace) takes time off at a secluded retreat called “the Colony.” But when, after nights of being tormented by bestial, bloodcurdling cries, Karen ventures into the woods seeking answers, she makes a terrifying discovery. Now she must fight not only for her life but for her soul!”

Featuring an amazing cast including Dee Wallace, Patrick Macnee, Dennis Dugan, Christopher Stone, Belinda Balaski, Elisabeth Brooks, Robert Picardo, and John Carradine and directed by Joe Dante THE HOWLING is a classic and this disc is definite “must own” awesomeness.