Primarily, the Twilight Zone was considered to be science fiction, only occasionally branching off into horror and fantasy (which is probably debatable). Nonetheless, Walking Distance is one of the fantasy episodes written by Serling after a bout of nostalgia attacked upon entering an MGM set. Well directed by Robert Stevens, the episode fully conveys how every single one of us, at one time or another has looked back to a time that holds fond memories, typically our youth, and probably wished for the opportunity to go back, even for just a few hours. This was Rod’s version, filmed on the famed MGM Lot 3 that had used the very same houses for filming Meet Me in St. Louis. Also, be on the lookout for a very young Ron Howard. 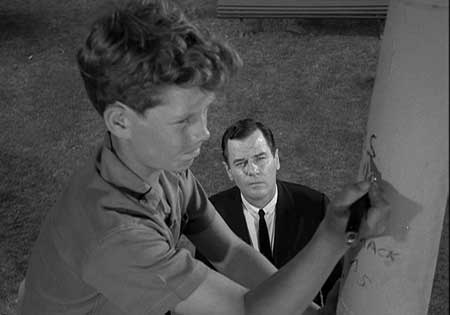 Middle aged Martin Sloan (Gig Young) is a burned out ad agency vice-president who has nearly reached the end of his rope. Attempting to get away from the stress, he takes a drive to the country and stops at a gas station. Noticing a road sign indicating the town of Homewood up ahead, he mentions to the attendant that he had grown up there and hadn’t returned for twenty years. The attendant takes to changing the car’s oil while Martin decides to walk ahead into town, referring to the mile and a half jaunt as walking distance.

Arriving in town, he enters a soda shop and inquires about chocolate sodas’ fondly recalled from his youth; ones with three scoops of ice cream and costing only a dime. The attendant gives him the order and as Martin eats it, reminisces about how much time he had spent there as a boy and of how the owner, Mr. Wilson, always slept in the big chair in his office before he passed away. The visually confused attendant simply listens until Martin leaves, and then goes to the office and awakens Mr. Wilson. 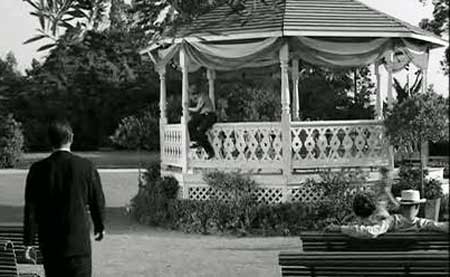 Continuing with the stroll around town, everything appears the same as he recalled from his childhood days and he comes upon a child (Ron Howard) playing marbles. Martin stops and makes small talk, telling the child that his name is Martin Sloan and that he used to live in the house across the street. The child says he knows Marty and that Martin is not him. Martin sarcastically, but with a touch of humor, reaches for his wallet and driver’s license as proof, and the child runs off.

Upon further inspection of the town, he chats with a woman, telling her that he was eleven years old when he carved his name into one of the gazebo posts. As he remembers doing so, he sees a kid (Michael Montgomery) on the gazebo carving and approaches. He looks at what the kid is carving and the name says Martin Sloan. Frightened, thinking he is in trouble, the kid pleads that he meant no harm and that everyone has done it. A few moments later, the kid runs off and Martin gives, but loses chase. 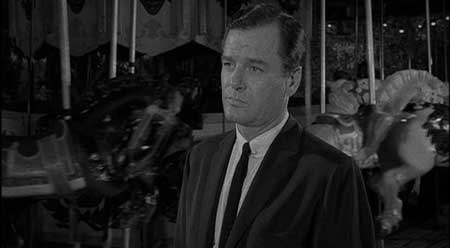 Martin goes to his parent’s home, where his father (Frank Overton) answers the door and his mother (Irene Tedrow) soon appears too, but they close the door in his face. A neighbor boy is out tinkering on the first brand new car he’d ever owned, a 1934 Roadster. This succeeds in convincing Martin that he has somehow gone back in time.

The evening falls and Martin returns to his boyhood home, where he meets up with his father in the front yard. His mother comes to the door and Martin tries to convince them that he is their son by showing them his driver’s license. Obviously they don’t believe him, viewing him as crazy.

Suddenly, he feels the overpowering urge to speak with his younger self and takes off running, searching for the kid. Finding him riding the park’s Merry-Go-Round, he again approaches and again the kid runs. However, this time the kid accidently falls from the carousel, breaking his leg.

As the boy is carried off, Martin says that he only wanted to tell him that these are wonderful times and to enjoy every moment, for it passes quite quickly.

Later on, after the park has closed, a solemn Martin sits on the edge of the darkened Merry-Go-Round. His father appears, intending upon returning the wallet Martin had dropped earlier. He mentions that he had already gone through it, and that the dates on both the driver’s license as well as the money bills haven’t occurred yet. While not understanding, his father accepts that Martin is truly his son, but tells him that he must go…”that there is only one summer to every customer” and that this summer is for Martin the child. He goes on, advising to stop looking behind and to try looking ahead.

Martin accepts the situation, reluctantly returning to the gas station and the present…limping along the way.