Home | Dark Sky Films Is Going To Leave Us In STITCHES

Dark Sky Films Is Going To Leave Us In STITCHES

My oldest daughter hates clown movies, hates em. Comes from watching IT with her old man when she was but a peanut. I’m gonna go out on a limb here and assume STITCHES will not be on her “must watch” list but that doesn’t mean it shouldn’t be on yours.

Got all the details on the release in a press release tonight, here are the details:

Years after a cruel kids’ prank during a birthday party for 8-year-old Tommy (Tommy Knight, Doctor Who, The Sarah Jane Adventures) left hired clown Richard “Stitches” Grindle (Ross Noble) dead on the kitchen floor, the childhood friends gather to plan a birthday bash to end all bashes. But they haven’t counted on the degenerate jester rising from the grave to seek vengeance on the children who mocked him and caused his grisly, untimely end.

Now Tommy and his teenage friends are on the run from an undead jokester who’s ready to use every trick in the book (and many that aren’t) to exact his revenge. Dead Meat writer-director Conor McMahon delivers a delirious slasher epic, a hilariously twisted and blood-soaked tale of one very bad clown with a talent for making balloon animals – but with one very hideous difference.

Winner of the Best Death Scene prize at Fright Fest, and also an Official Selection at the Sitges, Telluride and Brussels film festivals, STITCHES has received rave reviews.

The film will get a quick limited theatrical run on April 1st and then promptly makes a trip to Blu-ray, DVD and VOD the very next day, April 2nd. 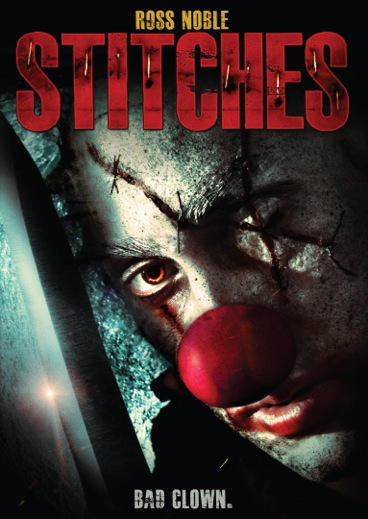