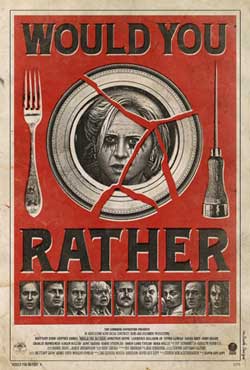 Desperate to help her ailing brother, a young woman agrees to compete in a deadly game of “Would You Rather,” hosted by a sadistic aristocrat.

Wow! Did this one catch me by surprise! Directed by David Guy Levy, “Would You Rather” is the story of Iris (Brittany Snow) who is trying to find a job as the movie begins. Iris has some outstanding bills that her deceased parents never got to. She also has a very sick brother, Raleigh (Logan Miller) who is in dire need of a bone marrow transplant. Her plight catches the eye of her brother’s doctor and he sets up a meeting between her & Mr. Shepard Lambrick (Jeffrey Combs). Lambrick invites her to a dinner at his home in which she will have a nice dinner & then participate in a “Game” with other similarly cash poor guests. The winner will have their bills completely taken care of by his foundation, The Lambrick Foundation.

Once Iris arrives at the home she finds 7 other people getting comfortable but not really knowing what the game is or how a winner will be chosen. But there is plenty to drink beforehand & Iris begins to meet the other guests before dinner starts. We’re never told what the other contestants financial problems are in depth (Although we’re given hints of the problems a couple of them have) but all of them are there out of desperation & the hope that the Lambrick foundation can bail them out. The dinner is hosted by Shepard, his son Julian (Robin Taylor) & a few large men serving two functions, serving dinner to the guests & keeping everyone from escaping the dining room. Shepard’s right hand man, Bevans (Johnny Coyne) is introduced as a former MI-5 agent and indeed his training comes into play almost immediately. 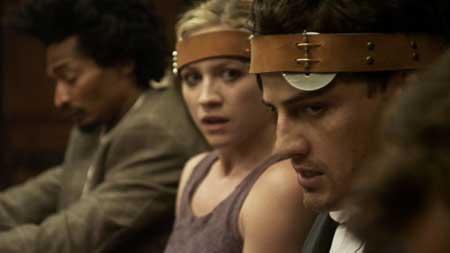 During dinner it’s revealed that one of the guests is a recovering alcoholic. John Heard plays Conway, the guest who turns away the wine offered up with dinner. Immediately intrigued, Shepard offers up a deal to him…$10,000 to drink the glass of wine! Conway refuses so he’s then offered $50,000 to quaff an entire decanter of scotch. After thinking over it for a second, he promptly drinks the liquor & pockets his money. It doesn’t matter since he won’t be around long enough to spend it…

What Shepard’s game consists of is a game my son likes to play with me in the car every so often. “Would You Rather” has no real rules, it’s just someone asking you “Would You Rather” do one thing or another. In this film the first round consists of the following choices: Would you rather stab the person next to you in the thigh with an ice pick or would you rather take three lashes with a African whipping stick (Sjambok)? The choices don’t get much better as the movie continues and as the cast is slowly whittled away I thought of the classic tag line: “Who will survive and what will be left of them”?

The movie works exceptionally well because of it’s whip smart cast. Along with Combs, Snow & Heard is a cast of seasoned professionals. Actors whose faces you might recognize but not their names. Standout among them is Enver Gjokaj as Lucas, the one other participant who seems to have a heart & doesn’t want to see a woman hurt. But everyone in the cast is excellent in their roles. They all bring heart & humanity to their roles & they convey pain in a most convincing manner! Another name you might recognize is former P*rn starlet Sasha Grey who plays Amy, the most heartless & cold of the guests. She’s attempting to do what Tracy Lords has accomplished and become a mainstream actress and judging from her performance here, she’s gonna do just fine. The audience just hated her as soon as she showed up on screen & she essays a woman who will stop at nothing to get what she wants with elan.

The script (By Steffen Schlachtenhaufen) is lean, mean & built for speed! It wastes no time getting to the central conceit of the film & once there it allows it’s cast to run with it without having to play it campy or over the top. I really liked the way it just sped from zero to sixty without any unnecessary exposition or filler. Budding scriptwriters could learn a thing or two about pacing from watching this movie. Even more impressive is the fact that there is very little actual bloodshed on display (There are a few bits of gore but nothing especially over the top). In fact, most of the bloodshed takes place off camera or obscured by something but I’ll be damned if the entire audience wasn’t covering their eyes, screaming at what they expected to see happen on the big screen in front of them most of the time. The film creates an extremely dour atmosphere that gets uglier & uglier as it continues. But that’s a good thing as it really works here and the acting is so good that I was really invested in each of the characters fates, even though I didn’t know why they were there in the first place. That’s the mark of a good script. 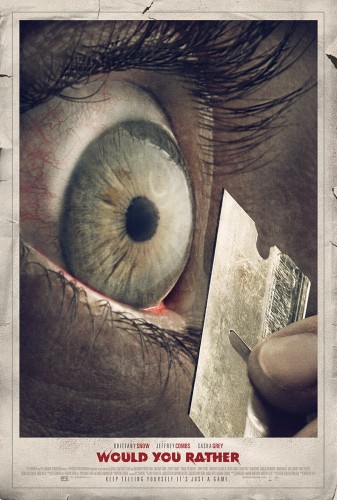 There were a few problems though. There’s a unnecessary subplot featuring the doctor who suggested Iris for the game & then has a change of heart and decides to try and rescue her. The film comes to a dead stop each time it goes back to the doc as he slowly makes his way towards the mansion and than takes a few seconds to get back up to speed. The worst part of it all is that the subplot is ended without much fanfare, leading me to wonder if it was even necessary. The other problem (For me, maybe not for others) was that I figured out the “Surprise” ending 30 minutes before the movie was over. While it wasn’t a game changer for me because I have a tendency to figure out the endings to films beforehand anyway, it might be for others. As it is, the ending supplied a satisfactory jolt to the audience I saw it with and no one left the film dissatisfied.

I don’t think you will either! I really didn’t expect too much from “Would You Rather” and was happily surprised to find a gripping, nerve wracking thriller in the vein of “Saw” waiting for me. It’s a well written, well directed & well acted little sleeper of a movie that’s well worth a watch!