Really, if you think about it this just makes sense.

We can also file this in the “everything old is new again” file. The anthology flick V/H/S which has been out for a while now cross platform, as a matter of fact it is streaming on Netflix right now, is now also available as an actual VHS. I wonder how many folks even still have their VHS players. I’ve got a couple hundred VHS tapes laying around the man cave but my player died years ago and I’ve never bothered to replace it. Regardless, I guess on the “kinda cool” gauge this one does get a little attention and I have and still do think that the artwork for this one is some of the best of the year. 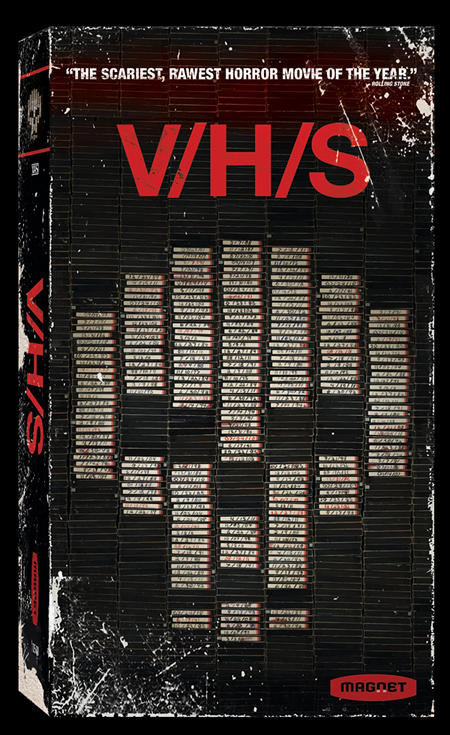 The press release probably does the best job of explaining why this one exists:

Are you they type of person who’s so obsessive about the movies that they love that they simply must own everything? If so then this one is for you! The anthology horror film V/H/S is NOW AVAILABLE on VHS format here in the US.
V/H/S was written and directed by Adam Wingard (The ABC’s of Death, You’re Next, A Horrible Way to Die), David Bruckner (The Signal), Ti West (The Innkeepers, The House of the Devil), Glenn McQuaid (I Sell the Dead), Joe Swanberg (Autoerotic, The Zone) and Radio Silence. For more info visit the official Magnolia Pictures website.
Synopsis

V/H/S is a point of view, found-footage horror film from the perspective of America’s top genre filmmakers. In V/H/S, a group of misfits are hired by an unknown third party to burglarize a desolate house in the countryside and acquire a rare tape. Upon searching the house, the guys are confronted with a dead body, a hub of old televisions and an endless supply of cryptic footage, each video stranger and more inexplicably terrifying than the last.

If you’re looking to add this one to your collection you should CLICK HERE right now!