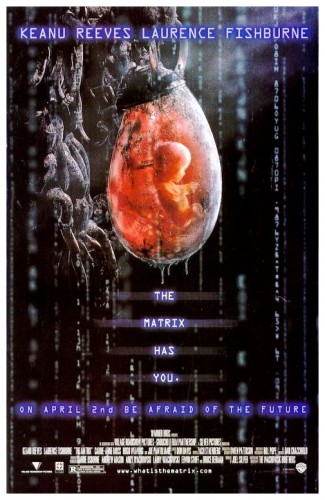 “Thomas A. Anderson is a man living two lives. By day he is an average computer programmer and by night a hacker known as Neo. Neo has always questioned his reality, but the truth is far beyond his imagination. Neo finds himself targeted by the police when he is contacted by Morpheus, a legendary computer hacker branded a terrorist by the government. Morpheus awakens Neo to the real world, a ravaged wasteland where most of humanity have been captured by a race of machines that live off of the humans’ body heat and electrochemical energy and who imprison their minds within an artificial reality known as the Matrix. As a rebel against the machines, Neo must return to the Matrix and confront the agents: super-powerful computer programs devoted to snuffing out Neo and the entire human rebellion.” (courtesy IMDB)

Every now and then you’ll find two very different motion pictures released almost simultaneously that deal with essentially the same subject: We encountered aliens in The Thing From Another World (1951) and The Day The Earth Stood Still (1951); we learned to stop worrying and love the bomb with Fail-Safe (1964) and Dr. Strangelove (1964); and we discovered that mankind is the result of ancient alien manipulation in both Quatermass And The Pit (1968) and 2001: A Space Odyssey (1968). In the final year of the last century we became suspicious of the manufactured world around us in two excellent science fiction films, both of which coincidentally were filmed in Sydney, Australia (even sharing some sets): The thought-provoking Noir-style Dark City (1999) and the action-packed visual feast entitled The Matrix (1999). 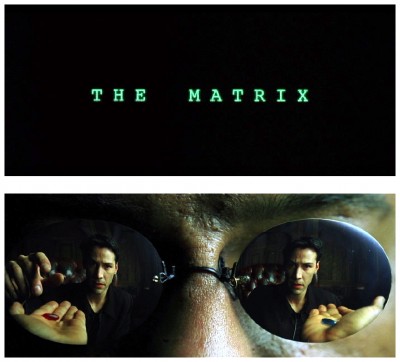 Over the last few decades it has become increasingly popular to bemoan the path of progress, a path that has fallen short of the glorious expectations of post-WWII Popular Science magazines and the like, which predicted a future in which commuters would fly to work using jet packs or teleoperate lunar bulldozers from the comfort of their robot-cleaned homes. But what if it was not just your vision of the future that had derailed, but the very reality in which we all live our lives? What if the consensus notion of reality was no more than a group hallucination or a construct? These disturbing ideas form the backstory and essence of The Matrix.

Within the first few scenes of The Matrix, the world as Neo (Keanu Reeves) has known it is brought crashing down around him. His depressing apartment, his stultifying job at the Metacortex corporation, even his black market dealings in computer software are all part of The Matrix, a computer-generated replication of a world that no longer exists. Neo is, in reality, sleeping away his life in a pod-like apparatus in which he is hooked up to a computer program that provides these dreams of a real life. The real world, instead, is now run by machines which live off human energy harvested from vast pod farms – just one of the many memorable and bleak special effects scenes.

Only a small group of humans now live in the real world, a grim and terrifying reality in which they must constantly battle for survival against the machines and the machine’s computer-programmed agents. These rebels seek to free the imprisoned and are also searching for ‘The One’ – a human about which a prophecy has been told who will lead them to victory against the machines. One of the rebel leaders, Morpheus (Laurence Fishburne), believes that Neo may be this very person, and much of the film revolves around Neo’s journey toward understanding what his role may or may not be in the approaching revolution against the machines. 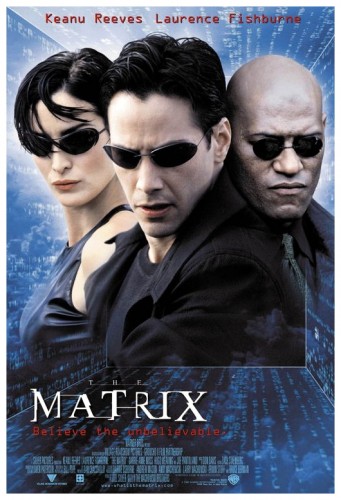 Owing some debt to The Allegory Of The Cave by Plato and ‘new-wave’ science fiction of the sixties, and even more to the cyberpunk sub-genre pioneered by author William Gibson, The Matrix emerged as a strange hybrid: An adventure combining stunning martial-arts action with an intriguing approach to science fiction. The film’s two writer-directors, brothers Andy Wachowski and Larry (now Lana) Wachowski, had developed their comic-book writing talents into careers as successful screenwriters. When the Wachowski’s screenplay for Assassins (1995) was being filmed for producer Joel Silver, the brothers presented Silver with the script of The Matrix. He loved the screenplay but didn’t want to give the inexperienced brothers a sixty-million-dollar movie to direct. He wisely advised them to cut their teeth on something a little cheaper, which resulted in the critically-acclaimed lesbian crime thriller Bound (1996). 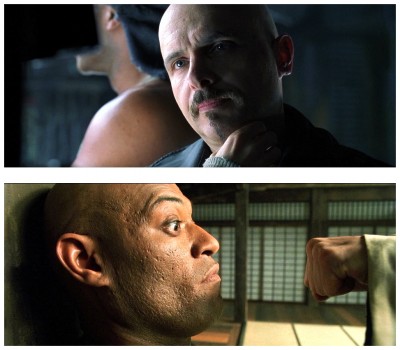 The success of Bound was exactly what the Wachowskis needed to earn the trust of Warner Brothers to direct The Matrix themselves. The brothers’ visual style – heavily influenced by their comic-book background – featured a startling sense for depicting time, favouring the ultra-slow-motion first used in the thirties by Leni Riefenstahl when filming Olympic athletes. This technique, successfully embraced for the ‘ballet-of-death’ sequences in films like Sam Peckinpah‘s The Wild Bunch (1969), had degenerated into a hoary cliche in recent decades, but the Wachowskis succeeded in re-inventing the style. In fact, some might say The Matrix was a hit largely because of its innovative ‘Bullet Time’ sequences, which essentially gave the impression of the camera moving around a subject frozen in time. 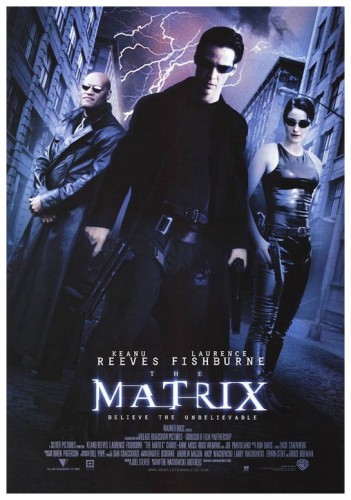 Not only had The Matrix bent the genre all over the place and introduced cyberspace to the mainstream, it had also made the stoney-faced Keanu Reeves actually look cool! Hey, it could have been worse! Nicolas Cage turned down the role of Neo because of family commitments, and Will Smith was approached but turned it down in order to star in the lamentable Wild Wild West (1999). Smith reckoned that, at the time, he wasn’t really mature enough as an actor and would have just screwed it up. Tom Cruise and Leonardo DiCaprio were also considered. According to the musical director Don Davis, Johnny Depp was the brothers’ first choice for Neo, but Warner Brothers wanted Brad Pitt or Val Kilmer. Only after Brad and Val said no would Warner Brothers be willing to consider Johnny Depp or Keanu Reeves, and Keanu was eventually chosen on the strength of his work in Johnny Mnemonic (1995). Other casting disasters averted include Gary Oldman as Morpheus, Gillian Anderson as Trinity (Carrie-Anne Moss), and Jean Reno as Agent Smith (Hugo Weaving). 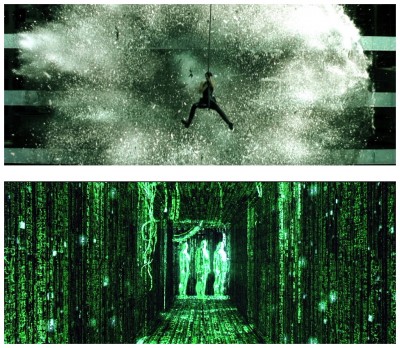 This was the groundbreaking first installment in the comprehensive series of Matrix films, comics, games and animations, containing many references to the cyberpunk and hacker subcultures, philosophical and religious ideas, as well as homages to Alice In Wonderland, spaghetti westerns, Chop-Socky films, dystopian science fiction and good ol’ Anime. The one-two-punch release of the sequels – The Matrix Reloaded (2003) and The Matrix Revolutions (2003) – blitzed multiplexes that year, accompanied by a blaze of media hype. Released only six months apart, the sagas received a simultaneous worldwide releases in 109 international territories. 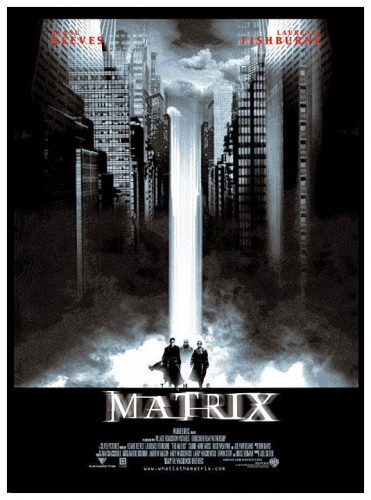 Each film utilises the newly-available virtual technologies in service to its story. Whereas Reloaded had focused on a ‘Burly Brawl’ between Neo and Agent Smith, and a hell-for-leather chase along a freeway, Revolutions centres on an entirely virtual journey into the nexus of the Machine World, a climactic ‘Super-Burly-Brawl’ (not unlike the climax of Dark City), and an enormous battle sequence that features both virtual and miniature effects. Known as the ‘Zion Siege’, the central Revolutions conflict pits humanity’s refuge – a giant cylinder of subterranean dwellings capped by a mushroom-shaped docking bay – against an unrelenting storm of attacks from the Machine World. But that’s another story for another time. Right now I’ll ask you to please join me next week when I fish-out more celluloid slop from the wheelie-bin behind Fox Studios, and force-feed it to you without a spoon, all in the name of art for…Horror News. Toodles! 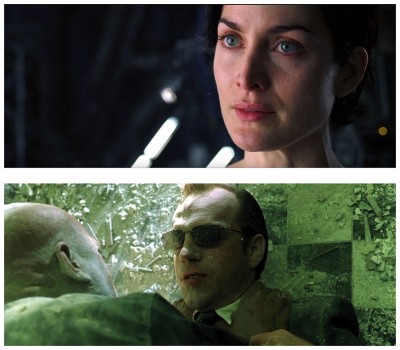