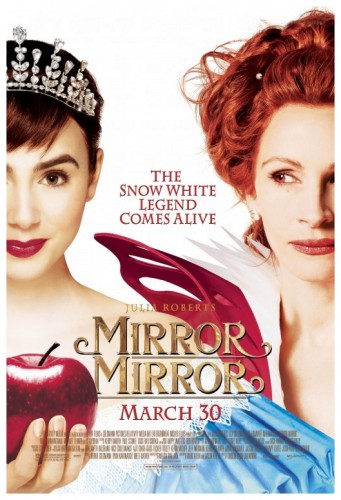 “After a beloved King vanishes, his ruthless wife seizes control of the kingdom and keeps her beautiful eighteen-year-old stepdaughter, Snow White, hidden away in the palace. But when the princess attracts the attention of a charming and wealthy visiting prince, the jealous Queen banishes the girl to a nearby forest. Taken in by a band of rebellious but kindhearted dwarfs, Snow White blossoms into a brave young woman determined to save her country from the Queen. With the support of her new friends, she roars into action to reclaim her birthright and win back her Prince in this magical adventure comedy that will capture the hearts and imaginations of audiences the world over.” (courtesy IMDB)

There aren’t many directors who could make a hop, skip and a jump from the subject of perverse serial killers – The Cell (2000) – to metaphysical quandary – The Fall (2006) – to ancient epic – Immortals (2011) – and end up with a light-hearted fantasy like Mirror Mirror (2012), yet Tarsem Singh has done exactly that. Though, much like an infomercial, that’s not all! All you Generation-Xers and Baby Boomers out there will surely remember the music videos for Losing My Religion by REM or Sweet Lullaby by Deep Forest. That’s right, he’s been there and done that. How about that Pepsi commercial with Beyonce, Pink and Britney singing the Queen song We Will Rock You? Yep, that’s right, Singh’s the guy. 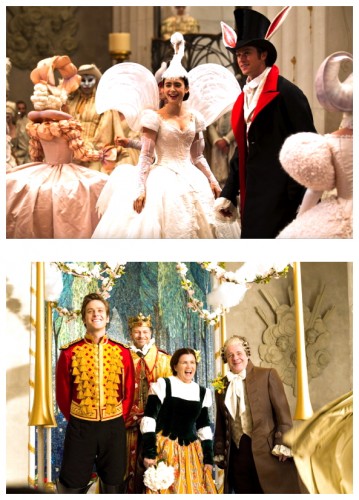 So the family-friendly fairy-tale Mirror Mirror comes as a complete surprise yet also seems quite at home in Singh’s eclectic body of work. In fact, he deliberately chose the script for exactly that reason – it’s so family-oriented he knew it would be breaking from what’s expected of him. The only constant in Singh’s CV is his undeniable stylisation – the world exists in light-and-shadow in his world. If it looks good and the visuals tell more than half the story, there’s a good bet Tarsem Singh had a hand in it. For one thing, the noble folk’s fashion sense in Mirror Mirror would put The Hunger Games (2011) capitol citizens to shame. For another thing, if you mute the film you can still tell with absolute certainty who the focus of the scene is through Singh’s masterful visualisation: They’ll be the ones donning spectacular colours or extreme headgear. 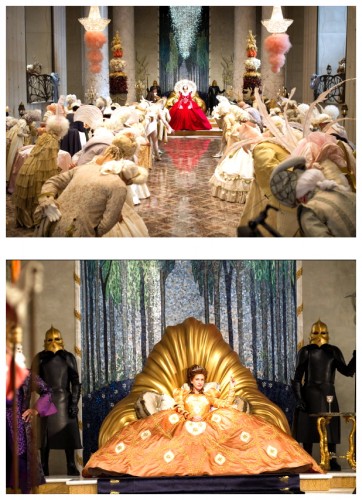 As a matter of fact, many of the costumes in the film were both heavy and almost impossible to move in and, during one take, Julia Roberts pulled a muscle when she turned too quickly to her co-star Nathan Lane. Needless to say, they had to stop shooting. Throughout the film Roberts’ wears enormous gowns, so big her children would sometimes hide underneath her skirts without the cast and crew’s knowledge. In fact, between takes she had to have her children removed from the set because she was concerned about them hearing her nasty dialogue as the evil Queen. 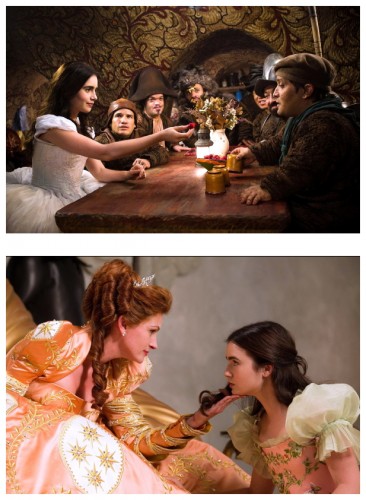 The traditional story of Snow White is given a handsome and funny makeover in this luscious production that puts Hollywood darling Julia Roberts into the shoes of the scheming Queen. After the King (Sean Bean) remarries and quite suddenly disappears, the kingdom is left to the mercy of the comically narcissistic Queen and her reflection, who drains money out the country’s coffers like a sieve. And boy, does Ms. Roberts relish the role! Her trademark smile is put to good use – though not for the right reasons – as she turns her right-hand man Brighton (Nathan Lane) into a c**kroach, Prince Andrew (Armie Hammer) into a doting puppy, and exiles the gentle-natured Snow White (Lily Collins) to the wilderness for stealing the Prince’s attention. Since the cashed-up Prince is critical to the Queen’s plans for financing her lavish lifestyle, she doesn’t want to risk his eye wandering. 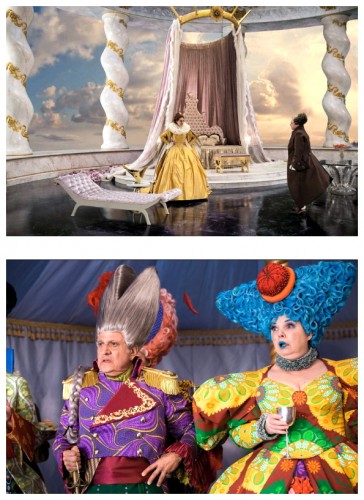 Banished to the forest, Snow White becomes a swashbuckling heroine with the help of seven diminutive but gymnastically-adept thieves. This Snow White is not so much a damsel-in-distress as a rebel-with-a-cause, as she plots to wrest the once-happy kingdom back from the Queen’s greedy paws. Oh, and save Prince Andrew too. With its vivid costumes and stunning sets, this gorgeous adaptation of the Snow White story will have both parents and the little ones in its comic thrall, which offsets the dark connotations of the original tale. 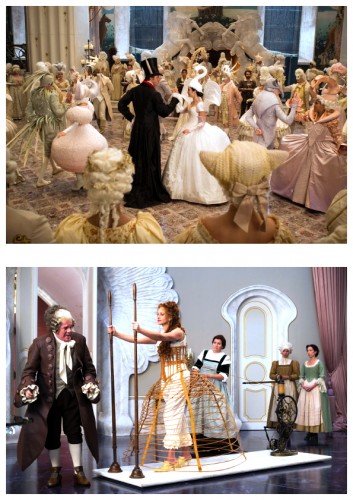 While the original Grimm Brothers story of Snow White doesn’t lend much visual play-dough for the filmmaker to really knead to his will, Singh has nevertheless left his very specific imprint. Unlike his previous films, Mirror Mirror lends the original dark tale a humorous air that goes beyond typical fairy-tale fodder. So, what on earth will Tarsem Singh do next? Well, it looks like he’s going to add Historical Drama to his already impressively liquid folio as he tackles the adventures and exploits of international explorer Marco Polo, but that’ll be another story for another time. I’ll now bid you goodnight and farewell until we again to grope blindly around the bear-trap known as Hollywood for next week’s star-spangled celluloid stinker for Horror News. Toodles! 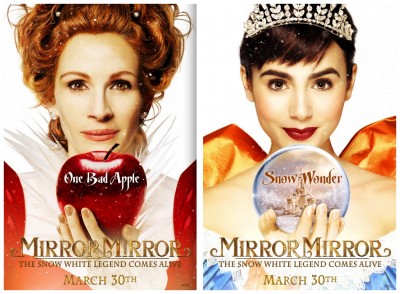