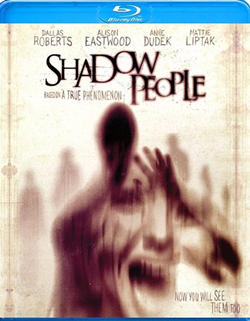 They are known by many names in many cultures. In Persia they are called “Bakhtak.” In Japan, they are the “Kanashibari.” In Mexico they’re called the “Subirse el Muerto” and the “Suk Ninmyo” in New Guinea. In America, they are known as “Shadow People.” They are very real, yet no one who has seen them have lived to describe them. Are you willing to believe? Victims report waking from sleep to find themselves paralyzed, a noise buzzing in their head, while a shadowy figure stands watches them, or sometimes even climbs onto their bed. The sightings are widespread around the globe for centuries, but many are afraid to talk about their encounters. According to experts, these appearances may be tied to a medical mystery of unexplained nocturnal deaths.

Shadow People is based on a true story about small town radio personality Charlie Crowe (Roberts) who unravels a conspiracy about encounters with mysterious beings. These “Shadow People” were the cause of hundreds of unexplained deaths. He encounters CDC Epidemic Intelligence Agent Sophie Lancombe (Eastwood), whose investigations entwine her with Charlie’s own discoveries leading them both into a dark world and a decades old cover-up.

The film explores the actual historical evidence of SUNDS and the real phenomenon of an inverse placebo effect, where the mind can actually kill the body through false belief. The film is backed up by real archival footage of a suspected outbreak of SUNDS, which occurred in rural Kentucky, and takes the found footage genre to a new level by intercutting the story with the actual interviews of the real-life participants, local news footage and radio clips from the event.