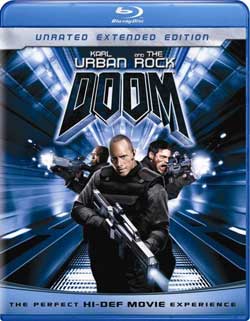 Space Marines are sent to investigate strange events at a research facility on Mars but find themselves at the mercy of genetically enhanced killing machines.

Full disclosure: when I was assigned to watch and review the film, “Doom” , the 2005 release based on the popular eponymous video game, I was more than a little skeptical about it. Films based on video games rarely prove to be high quality in most departments other than special effects, and they can be pretty difficult to take seriously. Luckily, “Doom” the movie doesn’t take itself too seriously either.

It also features about the same level of scientific accuracy and believability as other video game based films (ie, almost none), so bear with me here as we stroll through the plot together: In the year 2026, archeologists discover a device on Earth capable of teleportation to Mars. They name this device, which sort of looks like a cyberpunk version of an artificial Christmas tree stand, ‘The Arc”.

20 years later, a scientific military based research facility has been built on Mars to further study the remnants of the civilization who created the Arc, and more importantly, why they went extinct. The Arc is used to transport personnel to and from the station on Mars. A distress signal from one the the scientist’s on Mars is sent back to Earth headquarters, reporting a security breach of unknown origin or size. A group of Marines, known as the RRTS ( Rapid Response Tactical Squad) are dispatched to Mars to figure out what exactly has put the scientists in such danger. 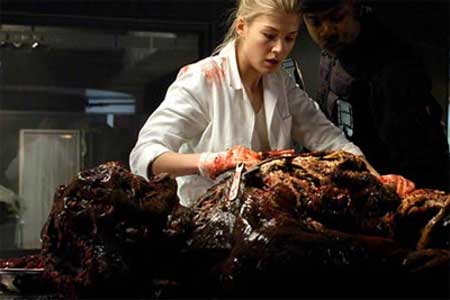 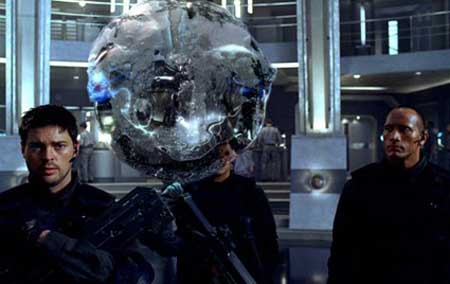 They take with them a pretty, wide eyed female scientist, Dr. Samantha Grim, (played by British actress Rosamund Pike) whose job it to retrieve scientific data and research. She also happens to be the estranged twin sister of one of the RRTS’s members, a shifty eyed, brooding Colin Farrell wannabe known as Reaper (because his last name’s Grim…get it? Grim. Reaper. Grim Reaper…never mind)

Now, if this plot sounds familiar, it’s probably only because it is. In terms of originality, “Doom” doesn’t have much to give. However, unlike most films based on video games, one could actually be able to sit through an entire viewing of “Doom” and not be bored or overwhelmed with unwatchable cheesiness. The production value is high, and the special FX and action sequence elements are pretty top drawer, and it has the decent gore needed in video game based movies. 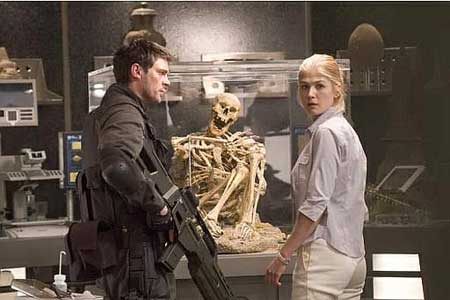 The leader of RRTS, “Sarge”, is played by former wrestler Dwayne “The Rock” Johnson. Johnson proves to be, perhaps unsurprisingly, a natural and formidable action film star. With his burning black eyes and skill with one liners, he anchors the film, which is interesting, since, he technically isn’t the star, rather the character “Reaper” (played by Karl Urban) is. However, Urban , it seems can’t quite find his footing in his character who comes across as too creepy to be a proper swaggering leading man action star.

While its nice that the main male female relationship is familial, rather than romantic, the sub plot of Samantha and Reaper trying to work through their strained relationship (born, it seems, from the death of their scientist parents who were also researching the Arc) rings hollow in a shoot em’ up action/sci-fi/horror film. Indeed, the film hits its stride when it stays grounded in its action roots. There’s even an interesting, if too long, sequence filmed to look like a first person shooter game. 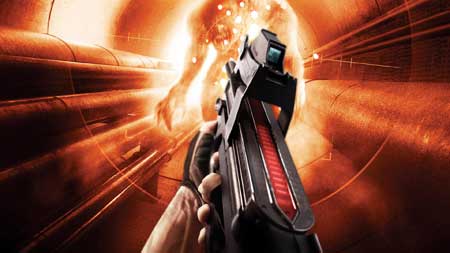 There are the usual silly cliches afoot as well. The youngest member of RRTS looks like he is about 12 years old, is nicknamed “The Kid” , is impossibly nervous and shaky for a Marine, and is clearly not going to make it to the credits alive. There’s also the requisite religious nut with a gun member of the squad, and the totally pervy creepy one with stringy hair and bad teeth who when not in his Marine garb, dresses in a Hawaiian shirt.

But, for all these fault, “Doom” is still better than most video game movie adaptations. Of course, being the best in a notoriously dreadful genre does not a fantastic film make, and “Doom” is no exception in that regard.

If it’s slickly made escapist action you seek, you could do worse. A lot worse. But its best to view “Doom” with a simple saying kept in the back of your mind- “it is what it is”.