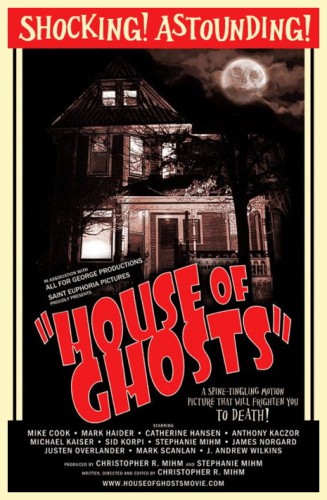 SYNOPSIS:
“Writer-director Christopher R. Mihm pays tribute to the works of William Castle, the master of classic horror. Rich socialites have a tradition of throwing exclusive dinner parties. This time, they’ve booked a spiritual medium who promises to open a portal to the great beyond. Can the group survive the night or will ignoring the medium’s warning be the last thing they ever do?” (courtesy IMDB)

REVIEW:
Ah, home sweet home, a haven of tranquility and security, a private cocoon, the one place you can truly feel safe, except in the nightmarish world of horror movies. Sinister darkened basements, haunted rooms, creaking doors and other unnatural otherworldly noises. Don’t fall asleep and don’t wander off, because malevolent spirits, psychotic subhumans, demonic repossessors, the ravenous undead, and homicidal poltergeists are waiting to invade, to break your bones, to tear your flesh, to feast on gore, to torture your troubled soul, and to generally be a bit of a nuisance. This week’s nostalgic knee-knocking nuisance is the instant classic House Of Ghosts (2012), Christopher Mihm‘s seventh movie but it’s his first supernatural thriller and right from the start he warns that, “It will literally frighten you to death.” This is not strictly true – as you can see, it had no effect on me whatsoever. 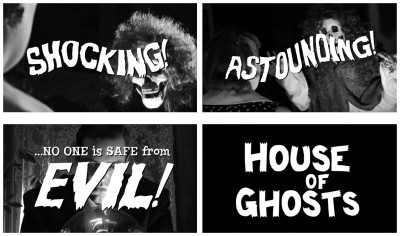 As many of you already know, Chris has been producing these loving homages to the B-movies of the fifties for over seven years now. He’s been surprisingly good at pretending to be successful at it and simply refuses to stop. His movies routinely rack-up awards and are frequently screened at film festivals, conventions and drive-ins all over the world, which only encourages him more! A true inspiration to independent filmmakers everywhere no matter how bad you are, in fact, I’ll let the moneyless movie-maker from Minneapolis introduce himself. The one, the only (and that’s more than enough) Christopher Mihm himself introduces the movie to reveal the wonders of film-making and his latest William Castle-like gimmick – the ‘Fear Shield’ – essentially a piece of cardboard to place over your eyes to protect you from the intense terror to be experienced while watching House Of Ghosts. You get two of these free with every DVD purchased from www.sainteuphoria.com 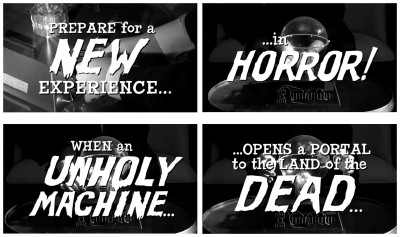 Damn it, now they’ve got me plugging DVDs! Next thing you know I’ll be promoting car parts! If Horror News thinks I’m going to endorse auto accessories they’ve got another spring coming. They keep asking, and I’m getting radial tired of it. What a bunch of Wankel rotary engines! If they expect me to change gear mid-review and spark-plug their products, they’re out of their piston-heads! I don’t like to blow my own gasket but I’ve got better things to do than just sit here and wax-polish lyrical about car parts. I’ve got my clutches on emails from fan-belts saying, “Nigel, you’re special! You’re unique! You’re differential!” Yes, I know it’s what they want – because they’re air-conditioned to it! Who’s calling the tune-up? Who’s in cruise-control here anyway? I’ll tell you who: Me, Nigel Handbrake, that’s who! So stick-shift that in your exhaust pipe and choke on it! I don’t care if they axle my steering column… 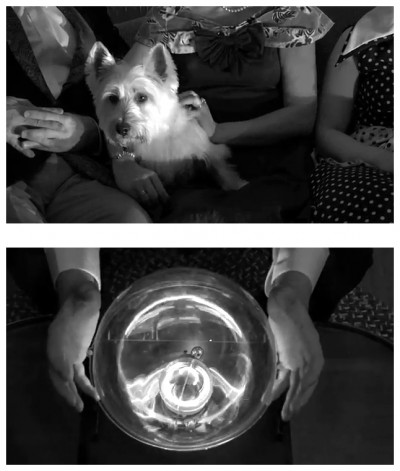 I just had to get that off my chest. Anyway, the newest old film you’ve ever seen, House Of Ghosts, is the latest addition to the great cinematic tradition of rich socialites throwing exclusive dinner parties during which a number of guests die horribly, like House On Haunted Hill (1959 and 1999), Night Of The Ghouls (1959), The Rocky Horror Picture Show (1975), Murder By Death (1976), Bloodbath At The House Of Death (1984) and Doctor Fischer Of Geneva (1985). Well, this time those crazy aristocrats have hired a spiritual medium who opens a portal to the great beyond with an unholy infernal machine. Just because it looks like a transparent bowling ball full of fireflies makes it no less sacrilegious. What could be on the other side? Evil stuff, of course, that’s where it’s usually kept. 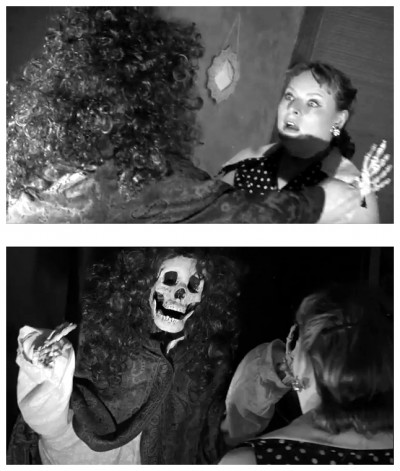 House Of Ghosts is an homage to fifties horror movie classics. Perhaps Mister Mihm should make a movie about my refrigerator – an tribute to food leftover from the fifties. In fact, it could very well be the unholy machine that opens into the land of the dead: expired broccoli; curdled potato salad; brown lettuce…someone really needs to clean that thing out – or kill it with fire. My furry old friend and furious filmmaker Christopher Mihm has temporarily left his science fiction roots to delve into the world of the supernatural and the movies of William Castle, who was also known as King Of The Gimmicks. His first film, Macabre (1958), offered a thousand-dollar life insurance policy for anyone who died of fright during the film. There were also nurses on hand to help the patrons if any of them required a happy ending, so-to-speak. Thirteen Ghosts (1960) required special 3-D glasses in order to see the ghosts, an obviously stupid gimmick that no-one would put up with nowadays. 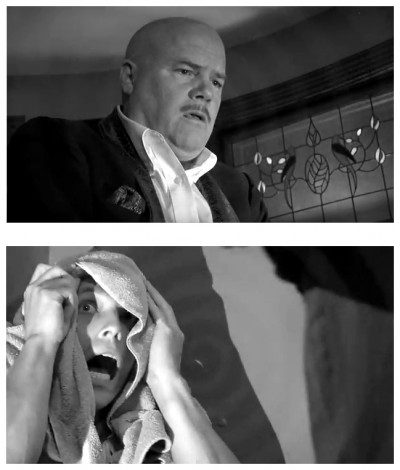 House On Haunted Hill (1959) starring my old friend Vincent Price, was the only film to be made with the quaint cinematic process known as Emergo: During the climax a skeleton would be wheeled out from above the screen above the heads of the bewildered audience. Another stupid idea, I know, but hey, a gig’s a gig. The Tingler (1959) had the cinema seats mined with joy buzzers to encourage the patrons to scream when the creature jumps off the movie screen and into the audience. That particular gimmick was reused at the premiere of Debbie Does Dallas (1978), except they didn’t use joy buzzers. Even worse, Homicidal (1961) had a Fright Break, a forty-five second warning to give scared viewers a chance to escape to the lobby before the climax of the film where, if they wanted a refund, they had to stand in Cowards Corner and sign a document admitting they were a five-star chicken. 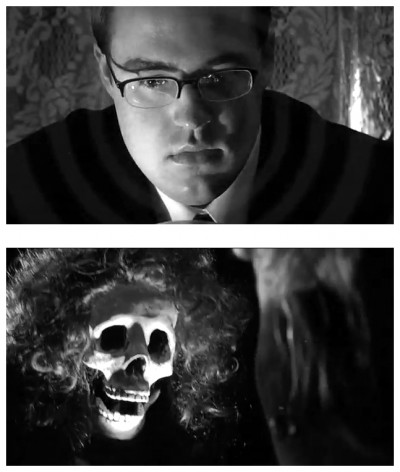 That’s enough about William Castle – what about the stars of House Of Ghosts? Mister Mihm has rounded up the usual suspects: Mark Scanlan plays Isaac; Sid Korpi as his wife Leigh; Michael Cook as Harlan; Justen Overlander as Ray; Stephanie Mihm as Ursula; James Norgard as Arthur; and Catherine Hansen as Mary. In case it wasn’t already obvious enough, I have no doubt you’ve already noticed the characters are all named, of course, after famous Australian Rules football players – especially Ursula. These and many more lies can be found amongst the special features on the DVD of House Of Ghosts available from Christopher Mihm’s website at www.sainteuphoria.com 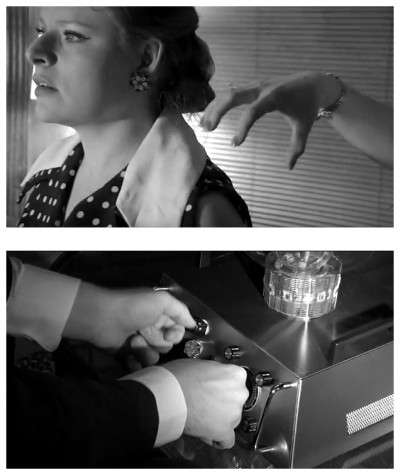 The DVD also includes the two ‘Fear Shields’ that I mentioned earlier, as well as two commentary tracks, blooper reels, trailers, featurettes, photo galleries, alternate endings, Esperanto language options, a voucher for $1.98 valid at any two-dollar shop, and an introduction by my old friend and fellow horror host Doctor Ivan Cryptosis! A bargain at half the price! Just mention my name for a quick kick in the crotch. Did I mention the price? Oh well, it’s too late now, I’m running out of room. I’ll just quickly wrap-up by saying House Of Ghosts exceeded my expectations, which is pretty bloody amazing, because I had terribly high expectations. By this time, I’ve become used to Mister Mihm’s movies exceeding my expectations but, even when I allow for that, they still exceed my expectations. 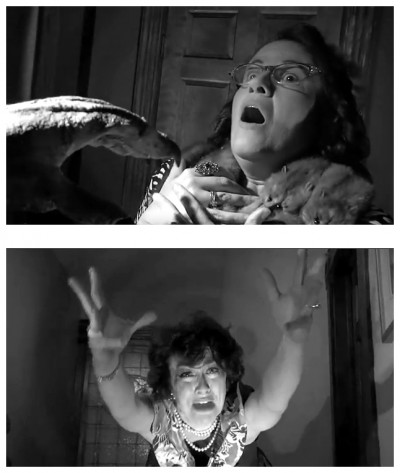 This one was an obvious labour of love for all concerned. Mister Mihm doesn’t produce parodies, but fond pastiches of the old B-grade movies many of us recall from our youth. Well, your youth – I’m a lot older than I look. His films are made on half a shoestring, but they look like they cost him the mortgage, and are far more entertaining than studio efforts that cost hundreds of millions dollars, minus the special effects. They’re like homemade cupcakes, better than anything bought in a store – they just are. And finally, painfully we crawl across the finish line of another review. Please try to come back next week – on time – for more cinematic smegma than you can poke a crystal ball at for…Horror News! Toodles! 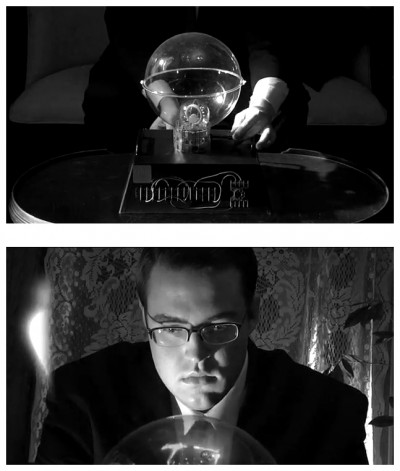