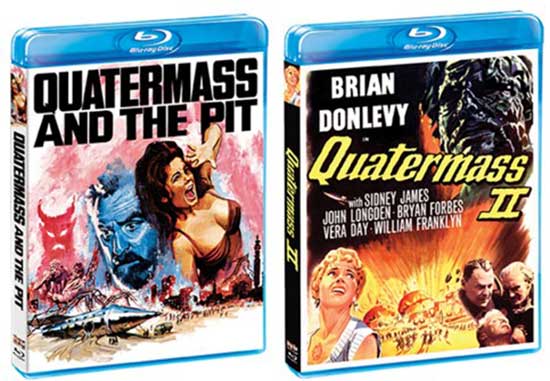 Hobbs End, Knightsbridge, London. While working on a new subway tunnel for the London Underground, a group of construction workers uncover a strangely shaped skull. Nearby, another discovery: a large, mysterious and impenetrable metal object. Initially mistaken for an unexploded bomb, the object and its strange power turn out to be far more horrific than anybody could have possibly imagined. Is it of this earth? Could it be the ancestral link to mankind’s evolution? Or could it be an ancient link to the unleashing of the ultimate evil?

There’s only one man capable of unravelling the clues, and his name is Professor Bernard Quatermass, a man of science who thrives on the dark mysteries of the world. On July 30, 2019, SCREAM FACTORY™ is excited to present two seminal British sci-fi cult classics QUATERMASS 2 and QUATERMASS AND THE PIT on Blu-rays. A must-have for movie collectors and sci-fi enthusiasts, these definitive Blu-ray editions contain extensive bonus content, including new interviews, audio commentaries and much more! Pre-orders are available now at ShoutFactory.com

QUATERMASS 2 (1957) is the second and most talked about of the three science fiction stories written by Nigel Kneale and based on his critically acclaimed 1955 BBC series. Professor Quatermass, played by Hollywood veteran Brian Donlevy (Beau Geste, The Glass Key) reprising his role from The Quatermass Xperiment, is Britain’s most clever scientist. Investigating a series of bizarre incidents that have been reported from a deserted area, he finds a group of soldiers and government officials that appear to be controlled by aliens from another world. When a close friend is brutally murdered by these beings, Quatermass leads a mob of local workers to a showdown with the extraterrestrials. Directed by Val Guest (The Day the Earth Caught Fire) and produced by Anthony Hinds (The Curse of Frankenstein), QUATERMASS 2 was retitled Enemy From Space for its U.S. theatrical release.
Written by legendary screenwriter Nigel Kneale, QUATERMASS AND THE PIT (1967) stars Andrew Keir (Cleopatra), James Donald (The Great Escape), Barbara Shelley (Village of the Damned), and Julian Glover (Indiana Jones and the Last Crusade). The film is directed by Roy Ward Baker (A Night to Remember) and produced by Anthony Nelson Keys (The Plague of the Zombies). For its U.S. theatrical release, QUATERMASS AND THE PIT was re-titled Five Million Years to Earth.
QUATERMASS 2 Blu-ray
Special Features:
QUATERMASS AND THE PIT Blu-ray
Special Features:
Shout! Factory will continue to present the on-going SCREAM FACTORY™ home entertainment series in 2019 with specific release dates, extras and key art. Meanwhile, fans are encouraged to visit the Scream Factory main website (www.screamfactorydvd.com), follow them on Facebook (www.facebook.com/ScreamFactoryDVD) and Twitter (www.Twitter.com/@Scream_Factory) or to view exclusive video content on YouTube (www.youtube.com/user/ScreamFactoryTV/Home
Share